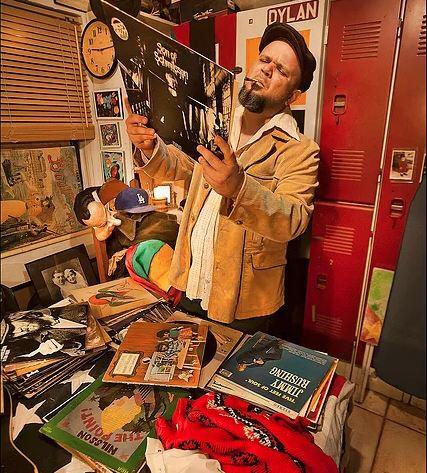 Watching Mad Cat productions often feels less like consuming theater and more like eavesdropping on inside jokes. The arcane references and obscure titles, the inexplicable musical interludes and Brechtian distancing effects are never amateurish, but they are cultishly insular, existing in bubbles difficult to penetrate.

The focus is squarely on the music to the negation of all else: There is little dialogue, most of it comprising muttered asides and ambient chatter from Mad Cat’s tech crew, which disconcertingly doubles as RCA studio staff. There is no playbill and no curtain speech. The show’s establishing conceit is scrawled in chicken-scratch on two pieces of paper tacked near the door of the Miami Theater Center’s SandBox space, and it’s easy to miss.

Dramatically inert while blurring distinctions between the production and the produced, Varry Harry is anti-theater at its purest. About midway through the 70-minute show, there is the pretense of conflict, of tension, of something other than a guy playing songs. Nilsson receives a phone call from an ex-wife and begins a raging argument, first on the studio line and then offstage. But Mad Cat denies us the satisfaction of hearing it by muffling Fabregat’s voice with studio tracks. Nilsson returns to the microphone flustered, but he gets over it. No spoiler alert necessary, because there’s nothing here to spoil.

The context of Varry Harry’s existence is worth nothing. Tei scrambled to mount the production in three weeks following the unexpected cancelation of Mad Cat’s planned March production, Jessica Farr’s Cassie. This may or may not account for the show’s narrative minimalism. Whether by circumstance or design, it rejects the biographical M.O. of most solo-artist musical revues. Shows like Lady Day at Emerson’s Bar and Grill, The Devil’s Music and Woody Sez provide the audience with backstories and character arcs, the idea being that if you knew nothing about Billie Holiday, Bessie Smith and Woody Guthrie at the outset, you would have a basic knowledge of their life and legacy by the end.

Here, the subject remains a mystery. In fact, we never hear his name spoken. Nilsson, who died of a heart attack in 1994, might have appreciated this denuded treatment. Like Tei, he was a rule-breaker, refusing to tour and limiting his rare live performances to brief cameos in Las Vegas, where he mostly played covers. He wrote some enormously popular songs, like the novelty hit “Coconut” and Midnight Cowboy’s “Everybody’s Talkin,’” but he was more popular among fellow-musicians—he’s been covered by artists as diverse as Mariah Carey, the Monkees and Glen Campbell—than the public. His fan base was, and is, the sort of obsessive audiophile that collects vinyl, compares set lists, and seeks out old video clips and vintage interviews. As one YouTube commenter said about one of Nilsson’s videos, “You either love Harry Nilsson or you’ve never heard of him.”

Playing to Nilsson’s base, Varry Harry is a curated survey of popular cuts (“1941,” “Cuddly Toy,” “One”) and obscurities (“Kojak Columbo”) alike. Though he is given frustratingly little to convey between songs, Fabregat performs with a wellspring of feeling, establishing Nilsson as both an acerbic wit and a confessional troubadour of loneliness, an underrated auteur in an otherwise fatuous decade (the ‘70s) for popular music.

He also plays his own acoustic and electric guitar, bass and a bit of kazoo, contributing to the production’s admirable verisimilitude. (In this way, Varry Harry shares some residual DNA with shows like Million Dollar Quartet and Mad Cat’s Broadsword, which revealed Fabregat’s stellar rock musicianship to the South Florida theatre world.) Where Tei and company skimped on story they made up for in sonic ingenuity. Even the show’s backing tracks were recorded specifically for Varry Harry, by Fabregat, Darren Bruck and Matt Corey, with a background vocal on “The Lottery Song” by Lindsey Corey.

Far from slavishly imitating Nilsson’s ornate sound, they freely added their own embellishments or revisions. The lavish pop of “You’re Breaking My Heart,” for instance, becomes a Hank Williams-style honky-tonk in Fabregat’s confident hands. Mad Cat envisions “I’m Mean,” which Nilsson would release on 1980’s Popeye soundtrack, as an untitled work in progress, with Fabregat summoning Tei from the recording booth to add spirited percussion. It’s not the only time these stripped-down arrangements are superior to Nilsson’s occasionally bloated originals.

Whether this qualifies as acting—as opposed to Erik Fabregat covering Nilsson songs for 70 minutes—I’m not sure. The music is so good that it cries out for a more substantial framework, with less navel-gazing and more insight into Nilsson the man. Mad Cat is all about deconstructing traditional theatre. But a teensy-weensy bit of construction, here and there, wouldn’t hurt.