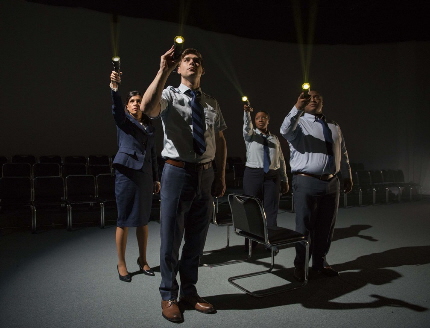 When prompted to discuss the difference between “suspense” and “surprise,” the 20th century philosopher Alfred Hitchcock proposed this famous thought experiment:

Let’s suppose that there is a bomb underneath this table between us. Nothing happens, and then all of a sudden, “Boom!” There is an explosion. The public is surprised, but prior to this surprise, it has seen an absolutely ordinary scene, of no special consequence. Now, let us take a suspense situation. The bomb is underneath the table and the public knows it, probably because they have seen the anarchist place it there. The public is aware the bomb is going to explode at one o’clock and there is a clock in the decor. The public can see that it is a quarter to one.… In the first case we have given the public fifteen seconds of surprise at the moment of the explosion. In the second we have provided them with fifteen minutes of suspense.”

I thought about this distinction during opening night of United Flight 232, the House Theatre of Chicago’s docudrama about a real-life air disaster, and the company’s seventh residency at the Arsht Center. Adapting her script from Laurence Gonzalez’s book Flight 232: A Story of Disaster and Survival, Vanessa Stalling subscribes to these Hitchcockian ethos. She dispenses with the pertinent facts of the tragedy straightaway, in a kind of prologue. Within seconds, we’re informed that on a July morning in 1989, a DC-10 jumbo jet, carrying 296 passengers and flight personnel from Denver to Philadelphia, crash-landed in a cornfield near Sioux City, Iowa. The plane caught fire and split into five pieces, yet 185 people survived the accident—through luck, through wiles, through the selfless heroism of their fellow passengers.

Armed with this foreknowledge, we embark on this most experiential of plays with lumps in our throats and anvils in our guts, anticipating the inevitable. Hitchcock’s scenario wracks our nerves for 15 minutes; Stalling’s real-time re-enactment places us on the plane for an hour, the tension building with every intermittent reminder of the countdown—40 minutes, 30 minutes, five minutes, two minutes, BRACE BRACE BRACE for impact. This is a production in which the conventional curtain-speech overture to “sit back and relax” need not apply.

The House Theatre’s visceral accomplishments are all the more notable for the minimalism in which they are packaged. A diverse ensemble of nine actors, most of whom play multiple, gender-blind parts, serve as an effective microcosm for the hundreds of people onboard. John Musial’s scenic design consists of just eight black chairs, identical to those provided for spectators in the Carnival Studio Theatre, on a horizontal stretch of carpet, positioned in front of a projection screen that’s used only sparingly.

Previous productions of United Flight 232, such as the House’s 2016 premiere in Chicago, welcomed audience members through a simulated jet bridge, as if they, too, were boarding the doomed airliner. This time around, the company has jettisoned such immersive flourishes: We are fully aware we’re watching a play, observing actors gripping their chairs and listing this way and that with each wayward turn of the “plane,” yet the magic of theatre transcends, and we’re right there with them.

As both adapter and director of this play, Stalling is a dexterous storyteller, balancing the emotional calisthenics of the passengers with the capital-T troubleshooting from the cockpit. A blueprint of the plane’s exterior, projected onto the screen, illuminates the places in which the great metal bird shattered into pieces. A scale model of the plane, held by an actor, illustrates its undulating movements at 26,000 feet, and actual audio from the cockpit to an air traffic controller in Sioux City enhances the verisimilitude. The script is jargony but riveting, and by the time 232 nosedives into the Iowan agriculture, we have a solid sense of both the engineering malfunctions and the complicated headspaces of the sundry souls on board.

In exploring the latter, Stalling has curated some of the best journalistic, humanity-revealing details from Gonzalez’s book, as when one passenger, requesting a double-shot of vodka, recounts the shaky hands of the flight attendant as she sends a cartful of mini booze bottles tumbling onto the carpet. Another flight attendant’s final mortal thoughts, as the plane is hurtling toward its extinction, is concern how her parents will find her keys and move her car from the employee parking lot.

Brenda Barrie, as Jan, the head flight attendant, is the closest the show comes to a lead actor, effectively communicating the necessary resolve to avert full-scale pandemonium while resisting her own untethering—note the subtle break in her voice as she first realizes she must “prepare the passengers for evacuation.”

Other than Barrie’s, I’m less inclined to mention the merits or shortcomings of specific performances, because in an odd way, this is almost beside the point. Her eight supporting players—Aida Alli, Alice de Cunha, Elana Elyce, Tommy Malouf, Carlos Olmedo, Johnny Arena, Kroydell Galima and Michael E. Martin—constitute an egalitarian cross-section of vacationers and businesspeople, teenagers and children, flight attendants and pilots. Some are more persuasive than others, and you may notice an occasional line flub that only briefly disrupts the play’s hypnotic flow. But the cohesion of the ensemble has an architectural beauty to it, with the collective edifice of regret, fear, determination, love and compassion outweighing the individual materials.

Moreover, this is primarily a director’s show. Stalling, working with musical director Michael E. Martin’s alternately lovely and unnerving score, blocks the show with an orchestral sense of movement. Sometimes filling her canvas with the full ensemble, sometimes isolating a single actor onstage, and every combination in between, her structure parallels the roller-coaster waves of terror and reticence that greeted the passengers and crew for that nauseating hour of uncertainty.

United Flight 232 is a haunting vision of what happens when even the most perfect piece of transportation technology fails us—a reality that has confronted the world once again this year, after 149 people perished in Ethiopian Airlines Flight 302 just two months ago. In presenting the moment of impact, the House Theatre’s spartan set undergoes an expansion that is simply stunning, and I’ll leave it at that.

But just as importantly, this show offers a moving and hopeful expression of kinship and shared sacrifice, and is a potent reminder of our common humanity in a time of seemingly insurmountable tribalism. It’s often difficult to watch, but it is frankly unlike anything I’ve ever seen before—and it’s as necessary as theatre gets.