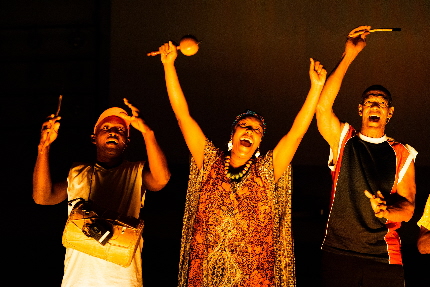 Inside The Colony Theatre, the smell of homemade soup wafts through the air. It’s emanating from a large, metal pot on a stovetop upstage. It stands out from everything else that surrounds it on a humongous, white, wooden U-shaped table, very large, and takes up all sides of the stage – connected on the back to the left and the right. The pot boils, onions, potatoes and other vegetables are in a bowl.

Behind the table and high on the wall is a big slab of whitewashed concrete, which ends up being the receptacle for English supertitles for the Spanish language play. While the audience continues to shuffle in, a man is sweeping what looks like orange stones from the floor into a corner.

This is the setting for what Miami New Drama bills as a documentary play. “No Fiction” says words flashed onto the backwall concrete.

Viva La Parranda!  is more than a documentary play, however. It’s a microscopic and humanistic look inside a Venezuelan town, El Clavo, and singer Betsayda Machado has become the voice of El Clavo. During the lively original musical, it’s difficult to imagine the latest news of a city an hour and a half away, right now, so filled with violence. Seventy miles away in the Venezuelan capital of Caracas, it’s pandemonium, a city where political demonstrations are raging, protesters run over by military tanks, and gangs of armed civilians in the streets are part of two factions split by their allegiance to political leaders.

Inside the Colony Theater, though, the celebration and traditional stories and music of inhabitants of the town in the Barlovento plains of Venezuela, El Clavo, seems like a step back in time from the violence (This is addressed, however, in a point in the play where they talk about how their quiet town was wracked by gangs and gunfire beginning in 2000).

But most of what Viva does is immerse you in a story of a people whose musical roots go back to Venezuelan slaves, and traditional songs that have acted as a glue to keep their community close knit.

The eight performers in the show are not actors, but part of the parranda band from El Clavo (although Betsayda Machado is appearing as it is noted in the program, with the permission of Actors’ Equity).

But as far as the storytelling, it’s top notch – a scripted show in Spanish with each “actor” telling their story. The tales are deeply autobiographical and culled from 500 hours of interviews and developed by director Juan Souki, according to program notes by Michel Hausman, Miami New Drama’s artistic director.

The show begins with a traditional song, a capella, with the only beat coming from one of the performers clapping together a wood block. Humble and Hardworking Brother: “We are the children of the Earth,” sings Betsayda Machado, Adrián Gómez, Oscar Ruiz, Asterio Betancourt, Nereida Machado, Youse Cardozo, Blanca Castillo, and José Gregoria Gómez, all part of La Parranda El Clavo. The group’s first recording Loe Loa: Rural Recordings Under the Mango Tree (they literally recorded the album under a mango tree) was what first brought them to the attention of the world only three years ago. Viva intersperses about a dozen songs through the storytelling and multi-media.

At one point, a video shows their performances, now having been everywhere from Lincoln Center to Kennedy Center (where they performed an original song in a Nelson Mandela tribute) and beyond. They had been singing in festivals and around the village for 30 years, but had never been heard outside of Venezuela. That is, until Souki decided to make them his project.

At one point, Adrián Gómez, nicknamed Ote, gives a revelatory speech about all of the places the band has performed. The list is so extensive, a stage manager enters and hands him a piece of paper so he can read the long list of cities. Ote beams with pride, and the audience applauds, beaming along with him and the rest of the group. Everyone is proud of where they’ve come from and what they can share from their tradition.

It’s moments like this that make Viva so special, drawing you into the world of the parranda band. They tell stories of their childhood in the village. They take their places on makeshift seating across the stage, which gives the setting the requisite neighborhood feel: someone sits on an ice cooler, another on a bucket, someone else on a drum, a rocking chair, and a bicycle.

They reminisce about a peddler who sold marbles and how they made their dolls out of nothing. They recall how underwear was only worn for special occasions, and how they each started singing and playing instruments.

They also tell of their lives besides playing with the parranda: Adrián Gómez is a cocoa farmer by trade and learned to work the land with his father when he was a boy. Ruiz is a cacaotero, the person who negotiates, manages and buys cocoa, Cardozo is a Caracas firefighter, Betancourt is a physical education teacher, Castillo dedicated her life to nursing, Gregoria Gómez  has a master’s degree in political and cultural management from Universidad Central de Venezuela, Nereida Machado, Betsayda’s sister, is a trained dancer, and Betsayda is the leader of the group, who has spent her life steeped in researching musical traditions and, most extensively, the Afro-Venezuelan music so essential to their DNA.

“We never believed we’d be in Miami Beach sharing our story with you,” she says.
Betsayda says about El Clavo: “You won’t find our town on Wikipedia.” There are highs and lows in their stories, like when the shootings in the town began in 2000, and when one Cardozo picks up a garbage bag and relays a story of how his dead father’s remains were delivered to him.

They share their identity crises. “We feel confused in our skin like others in our village. Am I a Venezuelan or an African?” The lights dim and now the people we have begun to get to know through their stories and music are on the big video screen. They are swabbing their mouths, showing how they all took part in a DNA test to find their original roots. They discover a mix of ethnicities: Nigerian, Spanish, Native American, and other ancestry.

But the tie that binds, in addition to the music, is that stew in the metal pot. How the traditional soup made of vegetables and meat is more than nourishment, but part of their very DNA. Whatever mix they’ve discovered they were, regardless they are still from the village of El Clavo. “Every Sunday, everyone brought what they could. In the street, men cooked sancocho by using an open fire.”

While all of Viva La Parranda could have easily become an educational, ho-hum history lesson, it is anything but. Viva La Parranda is an upbeat insight into a people and a culture. And, it’s about a soup – representative of community, family, tradition, music and peace.

Be their guest at the end of the show where everyone is invited on stage for a taste of homemade sancocho. It’s good!