Love Burns Is Off Beat Comedy About Modern Relationships 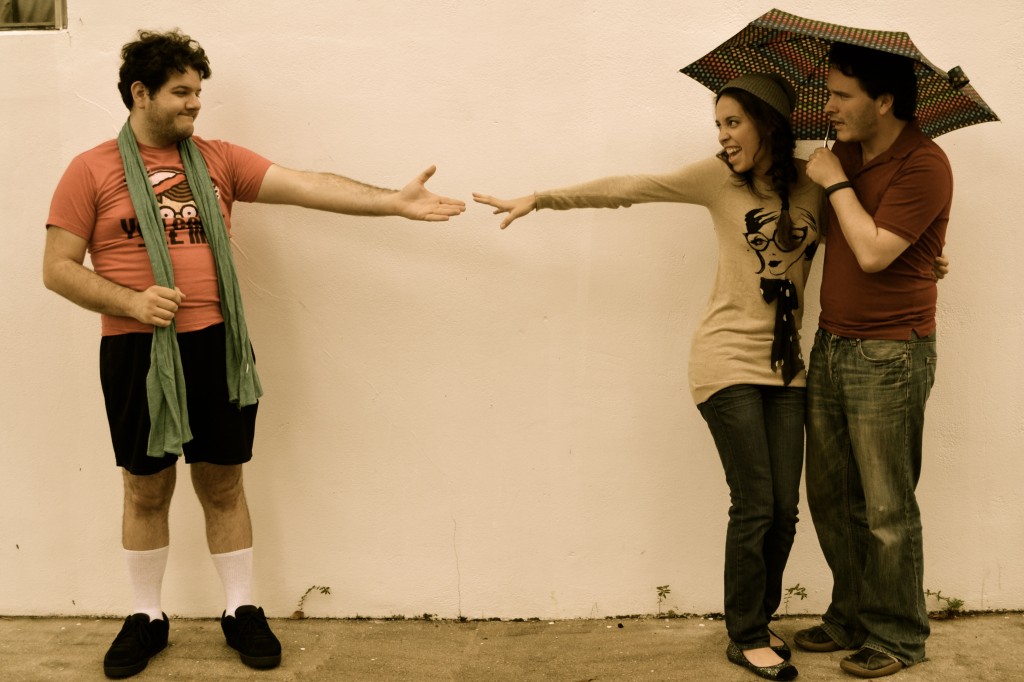 Seeing life through the prism of offbeat characters such as the oddballs populating the absurdist comedy Love Burns sometimes helps us perceive the modern world more clearly than any naturalistic drama.

The two daffy playlets produced by Thinking Cap Theatre are bitingly funny and sharply critical in their depiction of what passes for romance among twenty-somethings in the 21st Century. We’re laughing at them, but we’re also a little worried at the characters’ shallow definition of love.

That’s likely exactly what playwright Cherie Vogelstein wants you to walk away thinking after chuckling steadily at these two pieces, Date With a Stranger and All About Al.

Director Nicole Stodard and a quartet of fine actors deftly play these strange situations and beyond quirky denizens with fearless abandon – and at a speedy clip.

Both extended skits occur at a Starbucks-like coffee house, the new townhall meeting place for post-Millenial social interaction, presided over by a barista (Shira Abergel) who introduces and closes each act crooning a song while playing a ukulele.

In the first play, a creepy health club salesman  (David Michael Sirois) starts to hit on a lovely young woman (Ashley Price) who seems normal until she starts stealing sugar dispensers off the tables. Then she starts to come on to him with an aggressiveness that defies belief – and he responds in kind.

In the next 20 minutes or so, the two will race – and we mean race — through the entire arc of a modern relationship. Every twist and turn from the tentative exploration of each other’s personalities to the ugly breakup just sprint by. The script jets through a score of recognizable stages in an affair. The fact that they whiz past rational transitions just digs the satirical knife in deeper, lampooning how predictable and shallow relationships have become. But the lack of those transitions is indeed hilarious, especially in the deft hairpin turns by Price and Sirois.

The second act is only slightly less crazed. Sirois plays a self-absorbed handsome young man awaiting the appearance of his girlfriend (Price) so he can break up with her. Into the same coffee shop comes an old friend (Mark Della Ventura), a lovable schlub who wears Cookie Monster pajama bottoms in public and who has recently broken up with his girlfriend. He makes Sirois explain why he’s breaking up the relationship and then forces him to practice the breakup script for him before the woman arrives. Needy and lonely, Della Ventura’s character second guesses and punctures the bogus nature of Sirois’ complaints about the woman. Eventually, he makes Sirois change his mind, but for the wrong reasons.

Sirois and Della Ventura are close friends and colleagues in real life and their smooth banter, the linchpin to Sirois’ own play Brothers Beckett, is among the evening’s strengths.

Credit Stodard with helping the actors excavate every nuance and every laugh in Vogelstein’s script, and sending it flying by you as if the words and emotions were facets of a door-slamming farce.

The entire evening is not even 90 minutes including an intermission in which you can buy coffee, wine and pastries from the barista station on the set in Empire stage’s tiny living room-sized auditorium. But best of all, Abergel serenades you with a short set of offbeat tunes in keeping with the evening’s theme. She has a rich lovely voice perfectly complemented by her work on the ukulele and guitar, plus an occasional whistled bridge. Among the numbers is a lovely, but unnerving song in which a woman says she’s glad her boyfriend hit her when she was unfaithful because it proves he loves her. “Creepy,” she acknowledges.  And in tune with everything else in this evening’s world view.