M Ensemble Returns Again To Canady’s Brother of the Dust 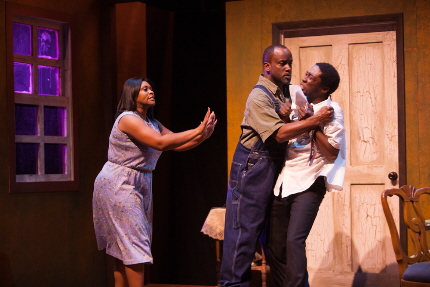 Rita Joe tries to break up a fight between Keith C. Wade and Roderick Randle in M Ensemble’s Brothers of the Dust / Photos by Deborah Gray Mitchell

Blood may be thicker than water, but Brothers of the Dust at M Ensemble asks whether it’s thicker than land or greed or, crucially, dreams.

M Ensemble presented this family drama three years ago with the same director Andre L. Gainey and the same lead Keith C. Wade, but that familiarity has paid off with a deeper, more assured and more affecting experience for the audience than the first rendition. Earth, fire and blood in many forms still mix with long-simmering resentments, loyalties, betrayals, secrets and love.

To be fair, the production and performances bounce between poles of seeming authentic, and stretches in which the acting feels as if the performers are “presenting” roles rather inhabiting real people. But nothing can dim the consistent underlying glow of the script by Darren Canady whose vision and voice are unusually promising.

The play digs deep into the soil of family relationships amid the background of post-World War II but pre-Civil Rights Era when African-Americans began to leave farms in the South to find long-denied fulfillment in northern cities in 1958. It’s a journey and culture clash that playwrights have been exploring tentatively over the past two decades, but which, surprisingly, rarely is depicted on film.

Canady achieves it by bringing together members of a family who have stayed behind on the farm and those who have migrated. The three Colton brothers jointly inherited a 200-acre cotton farm outside Conway, Arkansas, and now gather for the first time since their mother’s funeral seven years ago. Blunt taciturn Roy has given his life’s blood to maintain the hardscrabble farm with devoted wife Mayetta. Teenage son Jack chafes at his father’s insistence that he be groomed to take over the farm when Jack really wants to leave to start a career as a journalist. The father-son relationship echoes August Wilson’s Fences

Their lives are upended with the arrival of the manipulative middle brother Wilson and his hard-charging wife Nella whose business in Kansas City is failing. They are pressing hard for the family to sell the land to oil speculators. Complicating matters is the appearance of young brother Ollie — and his sophisticated girlfriend Audra — who has pursued a literary life in Chicago and is on the run from some life-threatening difficulties.

But conflict over selling a way of life is only the catalyst as secrets tumble out, sibling and marital ties are tested to the breaking point, and past and present betrayals threaten the future. It’s a profound irony that the mother deeded the land to all three sons hoping it would keep them together. Instead, it has driven them apart as stand-ins for African-Americans discovering divergent opportunities only now possible in the changing sociology of the 20th Century. These irreconcilable goals can only end in a scorched earth tragedy. As one character says, “Stuff is shifting.”

The decision by M Ensemble founders Shirley Richardson and Patricia E. Williams to revive the work was wise — the script is so strong that an attentive audience can hear the incisive telling words beneath the production whether it is soaring or just getting by.

Canady’s characters may have laser-focused cores, but the seemingly saintly or villainous are complex creatures who Canady helps us sympathize with. Most have both admirable virtues and crippling shortcomings. Each is wounded and all yearn with a visceral need to fulfill dreams. All have a hard-won pride that is endangered every moment.

His dialogue reflects the different rhythms, vocabulary and vernacular of the diverse characters, ranging from Roy’s plain speaking to Audra’s polished prose. But even more important, he credibly weaves dry wit and a hint of poetic metaphors into even the most prosaic speech, thereby imbuing every character with intelligence and inherent human dignity. Mayetta asks Roy if they are “two empty corn husks of humans who used to love each other? Used to touch at night? Used to hold and cling close?”

Jack says, “Sometimes I feel I’m …not at home….I feel like I want to ask God if maybe a mistake got made. Like maybe I’m not Pops’ kid. No, I mean I know Mama’s my mama and Pops is my daddy, but I think sometimes my soul was ‘sposed to be given to someone else. When I’m layin’ in bed, and I see those cracks in the ceiling, I get these ideas that… that my eyes should be seeing another ceiling. That I should be standing underneath another sky.”

He is equally a storyteller with a dramatist’s feel for solidly constructing a flowing narrative and with a cultural critic’s perceptive eye for how an individual family’s disintegration is a microcosm for larger social forces. This is both a depiction of a specific family who know how to wound each other with a quip and a broader social commentary.

(Full disclosure: Canady’s script won the American Theatre Critic’s Association’s Osborn Prize in 2011 for an emerging playwright, a competition which I chaired.)

Artistic Director Gainey does a respectable job getting performances out of these actors and in orchestrating the quiet moments and the explosions of temper. He feathers in telling touches such as Roy pulling a coverlet over the bare shoulders of a sleeping Jack and touching him tenderly as he leaves for the fields. The stage is not very deep, so Gainey does tend to have people line up across the stage with little variation. Additionally, a key scene with Ollie and Mayetta is played upstage when it should be downstage where we can eavesdrop.

M Ensemble, with a small budget that relies heavily on grants, has never been known for its visual quality, but this production like its The Kings of Harlem last January indicate that the company has turned a corner in production values. Mitchell Ost’s set of a modest farmhouse and yard dominated by a huge tree trunk is more convincing than usual, down to the cracked weathered doors. His evocative lighting design is especially effective showing differing times of day and isolating characters in intimate conversations.

Similarly, Richardson’s costume design clearly delineates character, from Wilson’s flashy three-pieced pinstriped suit that he thinks is what a successful businessman would wear down to Roy’s dirt-stained bib overalls.

Wade, a veteran of years working with M Ensemble, has grown in the difficult part since his first run at it. He becomes the fulcrum even though Roy is a hard tough man “married to the dirt” whose stubbornness can be alienating. Through Wade, Roy’s unshakeable commitment to the land and his pride in what he has wrought from it emanates from his bull-like features. Wade starts the evening a bit more marble-mouthed than necessary, but that eases up so that when Roy’s tightly-controlled emotions rip loose in furious volcanic arias, we understand the torrent of passion embodied by his words. Yet for all Roy’s obstinacy, Wade helps us see the purity of Roy’s selfless motives. We never doubt Wade’s creation of someone who has poured his blood into the dirt for his family and cannot comprehend the reality that none of them really value it as he does.

Rita Joe creates Mayetta as a loving salt of the earth matriarch who long ago accustomed herself to the role of farm wife. She knows how integral she is to the success of the farm, yet she’s lonely taking second place to her husband’s preoccupation with the land. Joe’s profile has risen with her work as the grieving widow in Miami New Drama’s recent Terror and her Carbonell-nominated turn as the beard for a white writer in Island City Stage’s The Submission. The performance is competent if not startling for much of the play, but in the final scene, Joe lets loose with a bravura passion that eloquently illustrates the Mayetta that has been buried for decades.

Roderick Randle plays the son as he did in the last outing, still able to capture a teenager’s dissatisfaction with the limitations of his life on the farm and his anxious yearning for a life far from this world. Randle played similar roles last year in M Ensemble’s production of Fences as well as one of the sons in Theatre Lab’s modern riff on Mother Courage in Motherland in January.

Carey Hart, another Ensemble veteran, never shies from playing Nella as the greedhead whose practicality and self-interest is so boundless that it is the source of laughter. But she is not a caricature: Hart makes it clear that Nella is a no-nonsense product of the streets who learned not to let niceties stand in the way when survival is at risk.

Devon Dassaw is fine as a desperate Wilson, allowing the need for economic security (and the accompanying self-validation) to outbalance the respect for family. Similarly, Marquise Rogers creates an Ollie who at first seems the most adjusted, but who turns out to have such deep needs for affirming relationships that he will use his charm to attract any likely partner. Both actors illustrate the frustration of people who have achieved their goal of “getting out” and yet whose dreams have turned to dross. Athena Lightburn is convincing as the true fish out of water, a sophisticated city woman in love with Ollie but with a clear vision of reality.

Brothers of the Dust is the second production in the new permanent home for the oldest continuously operating African American company in the state. After moving from venue to venue for about three years, the troupe has finally taken possession of its promised space at the Sandrell Rivers Theater at the Audrey M. Edmonson Transit Village in Miami. Sharing the space with others troupes, M Ensemble now has a modern black box space. This location also houses a gleaming new bus station, although it seemed deserted Friday night. It has a connected well-lit parking garage with security. The spot also easy to access: travel one block west of I-95, make the first turn south on 7th Avenue and it’s right there.

Following M Ensemble’s terrific production of The Kings of Harlem in January, Brothers of the Dust may not be a perfect outing, but it’s evidence that M Ensemble’s quality continues to rise and deserves an audience’s support.