Something Larger Than Life Is Missing In Riverside’s Mame 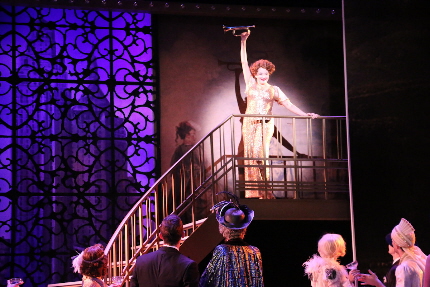 Michele Ragusa greets the guests in Mame at the Riverside Theatre

Although Jerry Herman’s music and lyrics come alive again in Riverside Theatre’s production of Mame, there’s something missing. For sure, those vaulting, gorgeous drops tickling the fancies of art history majors, and that sweeping grand staircase rising up and up, urge one to think big, just as Mame Dennis would. But they leave so much stage to fill, that the larger-than-life part of this production is not eccentric Mame Dennis…it’s the scenery.

Mame is the musical version of the comedy Auntie Mame. Both written by Jerome Lawrence and Robert E. Lee, the story’s central character is the charismatic Mame Dennis, a wealthy bohemian living in New York City’s tony Beekman Place. It begins in the bathtub gin days of 1920s and traverses to the late 1940s when modern art was still bubbling beneath mainstream radar. Mame is the doyenne of New York City’s offbeat culturati. Full of life and love, she takes everyone under her wing and urges them to “Live! Live! Live!”

“Life is a banquet and most poor sons-of-bitches are starving to death,” she says.

Michele Ragusa’s Mame is tender and caring and wonderfully voiced, especially in “My Best Girl” which she sings with Young Patrick (a charming Bergman Freedman); and “Bosom Buddies” which she sings with her gin-swilling friend, actress Vera Charles (a droll Corinne Melancon who is forced to wear a hideous black wig). Indeed, Ms. Ragusa has a most appealing stage presence and charm.

But while electrifying Riverside’s stage last season in the sassy, savvy title role for Hello, Dolly!, this time, her character’s grandness and stylish panache elude her. Certainly Ms. Ragusa has a built-in challenge: With Auntie Mame, one may conjure the larger than life, statuesque women who inhabited that character, namely Rosalind Russell (Tony nominee for 1957 Broadway show then Oscar nominee for the 1958 movie) and Angela Lansbury (a Tony Award-winning turn in the 1966 Broadway musical), both tall women who could track a large terrain in two or three strides and make it look so damned elegant at the same time. And, they were decked out in smashing costumes that celebrated sophisticated fashion and the woman wearing them. Here, not so much. Her best costume is saved for the curtain call.

The best comic moments in the show come fleetingly from supporting cast members, most notably: Laura E. Taylor as the Dr. Pepper-swilling Agnes Gooch; Gail Bennett with a hysterical send-up of a molasses sweet Georgia accent in her role of Sally Cato; Chelsea Turbin as ditsy blond Gloria Upson; and a funny walk-on by Nicholas de la Vega as foppish Gregor, an assistant in a men’s grooming salon.

James Brennan, a talented and inventive director/choreographer, has his best moments in the funny little modern dance scene and in the big dance numbers, especially “That’s How Young I Feel.” But on opening night, his cast’s energy at the top of the show was wanting and finally perked up when Mame stood at the top of her staircase and blew her bugle.

Jerry Herman’s music, supported by a pit orchestra led by Anne Shuttlesworth, certainly stays with you. So do those magnificent drops by scenic designer Cliff Simon.