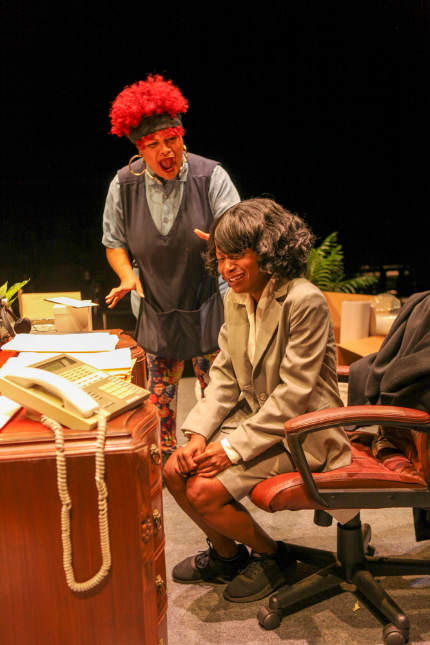 Sisters opens and closes exactly as expected – two women from disparate socio-economic backgrounds spar and clash, but two hours later have  bonded over the common need to remake their lives. But the affecting journey between those points is far from some simplistic television movie of the week.

Marsha A. Jackson-Randolph’s play at The M Ensemble Company might have a conventional, even shaky first act, but the second act is an incisive examination of what is means to be an African-American woman navigating the challenges of a modern world.

For instance, Jackson-Randolph unsparingly highlights the abyss between the worlds of the driven business executive and the prole cleaning her office. This includes both black women stereotyping each other in precisely the same knee-jerk expectations that the white male dominated society does.

And in an education for the non-African-Americans in the audience, Jackson-Randolph delivers a fascinating exchange in which the dark-skinned well-heeled business executive Olivia assails the light-skinned blue-collar Cassie for the inherent advantages that Cassie’s “yellow” skin color gives her with the white majority. Olivia says that when Cassie worked at McDonald’s she was allowed to work the cash register rather than work hidden in the kitchen fry because she appeared more acceptable to the white public.

During the evening, the women will exchange opinions and wisdom infused with anger and yearning about (among many other topics) women’s independence, the demands of motherhood, family relationships, age, patriarchal corporate America, sex, and the sacrifices made to achieve success or even subsistence.

Previous productions have leaned toward broad comedy with an underlying message (Cue a baritone announcer intoning: “Tonight, on a very special Different Strokes…”) and, indeed, there is a good deal of humor threaded through the evening. But seeing this Friday night with a tiny audience that didn’t laugh much, this never seemed the hoot that others have envisioned. Instead, the production seemed more of an exploration of a raft of ideas leavened with acerbic one-liners snapped out by Cassie.

The play opens during a monumental snowstorm late New Year’s Eve 1990, set after hours in a well-appointed office on the 20th floor of an Atlanta office building currently occupied by Olivia Delphine Williams (recent New World grad Tuesline Jean-Baptiste). The 31-year-old seemingly rising executive is markedly intelligent, driven and beautiful, dressed in a classic business suit and sporting straight hair. But we see something is profoundly wrong. She is packing up her personal belongings including her nameplate from the front door.

The last thing she needs right now is Cassie Charles (Chasity Hart) who arrives near the end of her shift to clean the room. The 41-year-old single mother with an aggressive won’t-stand-for-nothing attitude isn’t pleased to be separated from her child across town, and she’s worried about the snowfall outside certain to cripple a bus ride home. Cassie may be dressed in the corporate cleaning crew uniform, but being an outspoken and individualist, she has personalized it with wildly flowered spanks; her hair is a bright red dyed frizz.

In the ensuing verbal jousting, Olivia subtly plays her education and hard-won status while Cassie counterpunches with even harder-won pragmatism that grants zero respect for Olivia. Cassie is contemptuous that Olivia is quitting after being passed over for promotion (for a white male subordinate) after she designed a successful major campaign.

Cassie has a sharp quip for everything, some intentional, some accidental. Olivia asks, “Can’t we just be civil?” Cassie retorts, “Do I look like a civilian?”

Olivia was raised to believe in possibilities and labored hard to achieve them. But for Cassie, the concept of life not being fair isn’t a revelation but a fact acknowledged from childhood.

And then the power in the building goes out. After a vain attempt to leave in the snowstorm, they return to the office to spend the night with a bottle of liquor that loosens tongues, emotions and confidences.

This play was written 30 years ago and remains set in that time period. So while some of the overt racism, blunt sexism and other evils these women face might not be as readily accepted by their 2010 progeny as an inevitable “just the way it is,” obviously the problems persist today. But there are some period-specific clues such as Olivia asking Cassie when was the last time you saw someone in an ad that looked like you.

The first act does have some unlikely aspects, starting with Cassie’s downright belligerence from the very outset, showing absolutely no restraint in being blunt to someone who easily could get her fired. The buttoned up and buttoned down Olivia loosens into tears almost instantly under the influence of a single drink.

But the second act is an admirably deep probing of issues invested with the characters’ yearning for something better. Olivia says she doesn’t want to be a role model for other black women, she wants to create new models.

Jackson-Randolph, who has several scripts on her resume, has been directing shows at Disney parks in Orlando since 2006.  One strength in the writing of Sisters is how both women seamlessly slip into short bursts of almost poetic expression without seeming to violate their down to earth characters.

Chasity Hart (wonderful in AHCAC’s The Colored Museum) simply disappears inside Cassie, creating a complex and complicated person with innate smarts and perception but who has lost any hope of changing the dance steps of her life. She persuasively portrays Cassie allowing her spiky defenses to ease off by millimeters so that the final reconciliation is convincing, although her world-weary guard clearly remains in place.

Jean-Baptiste, a less experienced hand, does a solid authentic job in the scenes in which Olivia lets us see her anxiety and pain, but she usually seems like she is “acting” in the calmer moments and in disclosing the extensive backstory that the script saddles her with retelling.

Another virtue is the direction by Carey Brianna Hart – a veteran actress and stage manager for M Ensemble and Thinking Cap Theatre. Staging a show in the round without short-changing anyone in the audience is a major challenge that Hart nails most of the time. Counteracting an intensely verbal show, she keeps her characters in motion, circling each other, almost jockeying for position and hilariously dancing with abandon.

The office setting designed by Rachel Finley echoes those stylish aeries in every downtown, but carefully executed including stacks of back issues of Essence and Black Entrepreneur. Mitchell Ost provides late night office lighting, but also eerie blue illumination from outside the building when the interior power goes out.

This entry was posted in Performances, Reviews and tagged Marsha A. Jackson-Randolph, Sisters, The M Ensemble Company. Bookmark the permalink.