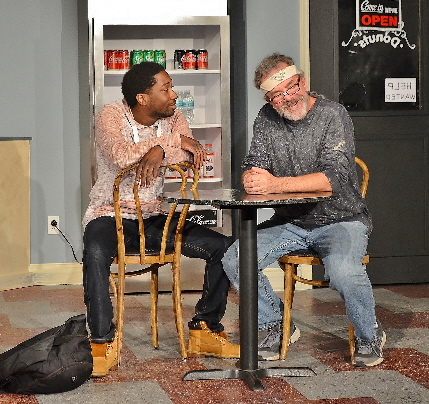 It took Main Street Players’ lethargic production of Superior Donuts about 20 minutes to show much signs of life, and even then the primary electricity came from one actor as a young man ablaze with ambition and hope.

This veteran community theater-turned-pro has gifted us with some fine work such as Bad Jews. But little voltage sparks across this story of a white shut-off 60-something shop owner burrowing away from life in an inner-city hood and the buoyantly hopeful young black man with a talent for writing and unfettered dreams.

Superior Donuts has long been a problematic property by Tracy Letts, famous for August: Osage County, Bug and Killer Joe. This work is often produced by regional theaters because it has promise on paper, but it has never quite landed right, based on many reports. This critic read the script originally produced by Steppenwolf and saw it performed twice, including once at GableStage in 2011.

Part of the problem is the person propelling the story is, on the surface, a burn-out whose disappointment and tragedies prompted him to give up on people, relationships and life. For the play to work, it requires an actor blessed with an inner spirit and an ability to infuse verbal stiff-arming with barely subsumed spirit even comic topspin that hints at a person worth us spending two hours caring about.

It also hurts the production that this committed cast, directed by Daniel Nieves, is working hard, but much of that work by some actors seems amateurish. Further, the pace is funereal so that a two-hour play with intermission here clocks in at 2 hours 35 minutes.

The central character (he’s too moribund to be called a protagonist) is Arthur Prsybyszewski (Mark Kroczybski) a 60-year-old hippie whose life froze in 1968 when he fled to Canada to avoid the draft.

After Jimmy Carter’s amnesty, Arthur returned home to take over the family donut shop in uptown Chicago, which has become a neighborhood gathering place. His father’s repudiation of his exodus, a failed marriage and other disappointments have shut him down emotionally and psychologically. Arthur’s only desire is to never open himself again to pain and disappointment.

Barging into his life like an encyclopedia salesman sticking his foot in the door is Franco Wicks (Roderick Randle), an ebullient bundle of pipe dreams and energy who convinces Arthur into hiring him to clean up. It becomes clear that the 21-year-old is unusually gifted, although he’s hiding a shady past. The thick stack of legal pads bound with rubber bands that he lugs around is his just-completed manuscript of what he claims is The Great American Novel.

Reluctantly, Arthur begins to connect with the young man, still refusing to place enough value in anything to fight for it. But Franco’s past returns in the guise of a Luther, a loan shark (Nieves) whose initially amiable demeanor slips into menace as he demands repayment of a $16,000 sports gambling debt that Wicks can’t meet. The inevitable crisis that forces Arthur to come back to life culminates in a bruising, bloody knock-down, drag-out fist fight.

It’s a ritualized, schematic plot played out in a wide range of movies and television series from Chico and the Man to The Pawnbroker. Since this script followed Letts scorching triumphs, audiences need to be warned that he set out to write a gentle humanistic comedy with a moral. It has a William Saroyan The Time of Your Life feel with quirky characters bringing their aspirations and baggage into a communal gathering place and then evil invading to upset the balance. But credit Letts for providing Franco with a wide-open faucet of hilarious quips, retorts, one-liners and opportunities to tease Arthur.

This production, like others, benefits from the role of Franco being cast with a young actor whose energy and facility with comic timing drive any scene he’s in. In this case, it’s Randle who recently appeared in Theatre Lab’s Ronia, The Robber’s Daughter and Motherland, and New City Players’ Clybourne Park.

Arthur isn’t completely dead inside; if he was, there could be no resurrection over the course of the play. He has locked away his compassion, humanity and especially his ability to hope because life has done such damage to him. Every previous attempt to reach out has ended in, to put it mildly, cauterizing disappointment.

But this Arthur not only has given up completely, but has made peace with it as if he always felt this way.  His not caring or expecting anything is not a lesson learned but part of the DNA he was born with.  It’s fine for that to be his exterior, but it’s crucial for the actor to communicate layers underneath. That’s why the play was originally cast with the superb actor Michael McKean and then in Florida with Avi Hoffman. The actor also has to have an innate irrepressible personality (not necessarily funny but it helps) to keep the first half-hour of the play engaging.

Letts gives Arthur some monologues to expose his inner angst, but in this production those interior scenes are as lackluster as when he is talking to other characters. But Letts is also to blame in such oversights as making it clear how Arthur knows that Luther is the culprit. Another problem is the big fight. Eighty-six percent of all stage fights fail to be convincing because the audience can see the missed punches and the like. The one at GableStage benefited from a first-class fight arranger, but this one doesn’t land well.

Filling out the cast is Leo Jasper Davis as James Bailey, the only Chicago patrolman in 2009 with dreadlocks sticking out from under his knitted watchcap; Danilo Rocha as immigrant Kiril, and David Gonzales as Luther’s goon Kevin.

And nit-picking, but while Main Street Players has a limited budget, apparently Arthur never changes clothes, not even his T-shirt over several weeks, and the same for some other characters.

Main Street Players has been producing a stream of promising work and audiences should continue to seek it out, but this offering is a disappointment.