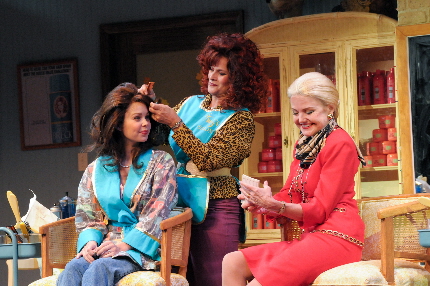 In an ideal world, critics have no prejudices. Every show, even the ones they’ve seen before and found incoherent or saccharine or turgid, should be approached with slates that are clean and spit-shined and laminated. We’ve all seen the vitality with which a new director, a new cast, a new company can infuse the most exhausted of warhorses. Every production has an A-plus baseline before the curtain rises.

Steel Magnolias, which few of us jaded nitpickers have a burning desire to see again, is one of the shows that challenges this hallowed objectivity. Those seeking theatre that provokes or stimulates, that questions our biases or expands our worldviews — catnip to critics and adventurous audiences — will find little nourishment in Robert Harling’s provincial 1987 dramedy.

Steel Magnolias is a passive entertainment even in the surest of hands.
What a great production of the play can achieve is an endearing verisimilitude of time, place and character, the feeling of being transported to an environment that is both universal and specific. It’s set in a beauty salon in a cozy Louisiana parish, but for the six women who occupy its chairs and run its business, Truvy’s is a neighborhood bar, a town square, a therapist’s office — a central park of hopes, dreams, gossip and solidarity where no men are permitted. (If anything about Steel Magnolias was novel in 1987, it was this all-female cast, arriving at a time when David Mamet’s macho, mine’s-bigger-than-yours dramas were dominating Broadway and the regions.)

This is where Maltz Jupiter Theatre’s stilted, season-opening production fundamentally stumbles. From the direction to the casting, it fails to capture the movements and vocal rhythms of everyday life. It looks convincingly like a beauty parlor—Narelle Sisson’s scenic design is well-appointed with cosmetic paraphernalia and functional plumbing, with a lovely tree canopy catching the light just outside the salon’s windows — but the action onstage seldom approaches reality as we know it.

To be fair, this production received a crippling blow on opening day, when Barbara Bradshaw, cast as the curmudgeonly Ouiser, fell ill and was replaced at the 11th hour by Julie Rowe, performing with script in hand. Her unconvincing wig notwithstanding, Rowe’s pinch hit is commendable; I can only imagine the nightmare of blocking for a new actor with only six hours’ notice.

But this production’s problems run deeper. Director Marcia Milgrom Dodge favors the pace and delivery of an antique four-camera sitcom, turning potentially three-dimensional characters into southern-fried caricatures that tend to oversell their witticisms and outbursts alike, performing to us as much their colleagues.

The only actor who feels fully comfortable in her character’s skin is Kim Cozort, whose Truvy is a fount of warmth, congeniality and self-deprecation. She’s this production’s glue — the den mother keeping her disparate clan together.

As Shelby, the sickly twentysomething newlywed with tragic dreams of motherhood, Paige Silvester is fine, but her most dramatic moment—her seizure in a parlor chair—is too tame by half, less a diabetic shock than a nervous affectation. (Paige’s subsequent rejection of juice to alleviate her symptoms remains one of Harling’s more inexplicable stage directions; it didn’t make sense in the film, either, even with a fiercer commitment from Julia Roberts.)

Alison Fraser’s performance as Clairee, the sartorial widow of the town’s mayor, is hampered by an unorthodox delivery that moves to its own staccato drumbeat—so much so that it sounds, on occasion, that her lines are only coming to her in the nick of time. As for Annelle, the newest resident of parish and a born-again Christian with a bumpy past, Taylor Jackson plays her as a cartoon, a parody of small-town quirk. She presumably performed the role as directed, but it doesn’t work.

The same fate befalls Crista Moore as M’Lynn, a counselor and mother to Shelby, whose otherwise serviceable work disappoints when it matters most: her breakdown at the climax. Dodge imagines the scene in the most static and superficial way by having Moore pace downstage, for the audience’s benefit, which has the whiff of amateur theater. This is a problem throughout this awkward production, in which actors are often positioned collectively near the lip of the stage, reciting dialogue to the fourth wall like suspects in a lineup.

Even the sound design, typically superlative at the Maltz, wavers. The gunshots and dog barks that punctuate the first act accurately seem like they’re emanating from an adjoining property and not a speaker in a playhouse. But the important business of Shelby’s portable radio, which the characters theatrically pound when adjusting the ambient noise in the salon, is muddled. The radio is so inconsistent that it’s difficult to know when it’s being shut on or off. At one point, the volume spikes and then decreases, an electromagnetic anomaly that the characters treat as business as usual, when it’s most likely an ill-timed cue.

It’s a small thing, to be sure, but it’s a microcosm for the show as a whole. As much as Harling’s PG-rated bon mots will still strike a chord with some in the audience, this is a production that’s chemically out of tune, searching for a frequency it can’t find.