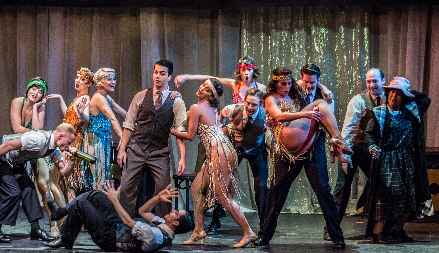 Often critics start their reviews with some analysis of the life lessons that a theatrical work contains. Not this time. The deep inner meaning of Broward Stage Door’s peppy perky production of Nice Work If You Can Get It is unabashedly “let’s have fun.”

With virtually the entire Gershwin songbook at their disposal, the creators of this entertaining trifle have affectionately constructed a 21st Century send-up of those 1930s musicals with a ludicrous farcical plot and a wealth of catchy melodies that are still standards 80 years on. It is exactly what you expect to be and a little bit more.

The little bit more is thanks to the charming performances and warm voices from much of the cast, especially Rebecca Tucker as the lovely bootlegger Billie Bendix and T.J. Lamado as the layabout playboy Jimmy Winter. The entire enterprise is molded by director Clayton Phillips who knows precisely the wry, tongue-in-cheek tone to strike.

The team that created the work in 2012 picked 19 songs that include nearly every one you can name off the top of your head in 30 seconds (such as “Fascinating Rhythm”) and a few you may not have heard of.

You can’t fault the creative team for the thinness of the plot. They tweak them before you can with wry meta-references and gentle jabs, even lampooning how the old musicals dropped in a song that really had nothing to do with the plot. A favorite moment has to be bootlegger Billie providing a dreamy creamy “Someone To Watch Over Me” while popping her rifle over her shoulder as punctuation as she keeps an eye peeled for the cops.

The script by Joe DiPietro (Over the River and Into the Woods and I Love You, You’re Perfect Etc.) is an original pastiche/homage to those silly frothy books written for ’30s musicals. In fact, he has credited being inspired by Guy Bolton and P.G. Wodehouse. But anyone who has seen a revival or film of these shows intact knows that their stories would never satisfy today. DiPietro has applied a lot of craft to pull this off.

The story posits charmingly tomboyish bootlegger Bendix hiding her latest shipment in the basement of the Long Island estate of charming wastrel playboy Winter who can’t figure out if he has divorced his latest wife or not. Also on hand are Billie’s charming henchmen (Michael Schneider and the wonderful Michael H. Small) who pose as a butler and cook to watch over the haul, as well as Jimmy’s airhead snob of a fiancée (Emily Freeman) and her Prohibitionist aunt (Dalia Aleman) – plus another half-dozen stereotypical madcaps, plus 10 chorus boys and girls. There’s even Gail Byer in a tiny deus ex machina role that comes so late in the show, you forget she’s listed in the playbill. But if you haven’t figured out who she’s playing and at least one of her secrets, you haven’t been paying attention.

The chief joy of this show is seeing and hearing the jaunty Gershwin tunes given a lush and loving mounting with solid singers, gorgeous arrangements, a full if digitized orchestra and classic Broadway musical choreography by Danny Durr.

Something about Stage Door’s facility has always sent a subliminal message that it is not as well-heeled as many other theaters in the region. Often this is because as fine as the computer tracks are, you miss the sound of a live orchestra when the score is as plush as this one. So as bright and energetic as the cast is under Phillips’ leadership, there is an unfair sense of a production being one cut below what it could be.

But don’t fault Phillips and the cast, all of whom have voices perfectly suited to the Gershwin oeuvre, molded by musical director David Nagy. Tucker may not have the phenomenal pipes of Kelli O’Hara who created her role, but her infectious enthusiasm and spirit easily win over the audience. Brylcreem smooth Lamando is a far better singer and arguably better actor in this particular role than his predecessor Matthew Broderick who sleepwalked through his performance on Broadway.

But special attention goes to Small, the veteran of local theater whose gravely outer borough brogue and fine-tuned vaudevillian timing recalls a host of comics from the 1940s and 1950s who always spoke as if they were chomping an invisible stogie.

Durr had to scale back the degree of difficulty for the leads when they dance the light fantastic, but his chorus is composed of spirited dancers who do justice to his angular arm movements, high kicks, bodies sliding on the floor between the legs of their partners and the recreation of all the classic dance tropes of the period.

(Note: Stage Door is moving in August to the Lauderhill Performing Arts Center. Some people in a recent audience spread a rumor that the admission prices will be higher. In fact, they will stay precisely the same with Stage Door absorbing the cost of a new ticketing process.)

Nice Work If You Can Get It will run through April 15 at Stage Door Theatre, 8036 Sample Road, in Margate. Performances 2 p.m. Wednesdays, Saturdays and Sundays, 8 p.m. Fridays-Saturdays. Runs 2 hours 40 minutes including one intermission. Tickets $48 (Student prices are also available with valid ID). Call 954-344-7765 or online at www.stagedoorfl.org.