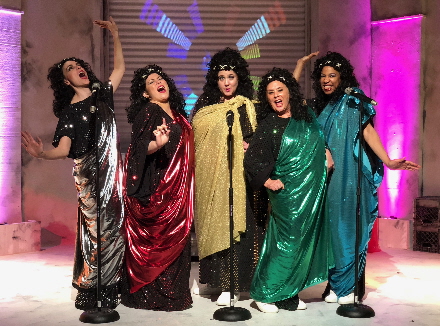 Nicole Stodard has a distinctive artistic vision, most visible through her created and curated work at the Thinking Cap Theatre she founded.

Among its hallmarks are inspired highly theatrical explorations of feminism, gender identity, and other issues still so unsettled that they can be reexamined in new takes on centuries-old plays such as a gender-fluid The Importance of Being Earnest and an updating of Aphra Benn’s 17th Century The Rover.

Thinking Cap’s newest world premiere, Women In Assembly, is a satirical comedy credited to Aristophanes but transmuted into a farcical romp through extensive research and adaptation by Stodard, who is also a literature scholar.

We’re going to review the production, but Stodard’s standing as an artist raises deeper debatable issues about the relationship and responsibilities among the artist, the critic, the artist’s champions and the general ticket-buying audience. She has been exploring this on Facebook threads with her colleagues and this deserves an essay in this space later this spring.

Women In Assembly is the result of Stodard studying three “translations” (that usually means loose adaptations with differing interpretations) of the Greek sage’s comedy and then cherry-picking the best lines and concepts from each.

Then she extrapolated it all through her unique perspective into a bawdy irreverent satire about what happens when Greek women take over government and society from men and reshape it to their saner philosophies. Of course, the men do not appreciate being relegated to the second-class citizenry they had imposed on the women. Some of the speeches and references are not simply relevant today, but resonate with thunderclaps.

Praxagora, the leader of the rebellion, in making her initial pitch to the male-only assembly, says, “Look around, our state is going downhill; Things keep getting worse and worse. Must I suffer in silence? Must I put up with it? Look at our leaders: the rotten types, all fools or crooks. They spend one day helping the state, and ten helping themselves…. Things have simply never been so chaotic. Nothing stays the same for two days on end. One minute you hate your neighbor and they hate you; next minute you’re allies, and you’re busting a gut to be nice to them. You think fools are brilliant, and brilliant men are fools.”

Being a Thinking Cap show, everything is awash in inventive over-the-top staging with wild costuming, considerable sexual and scatological humor, injections of 21st century vernacular, lampooning of pop tropes and a palpable delight in upending traditional roles that male society has defined for women.

Whether it’s husbands wearing their wives clothing because the women are disguising themselves in their mates’ formal wear or an extended terpsichorean celebration to the disco “Neutron Dance,” all this the madcap mayhem elicits considerable giggles and guffaws.

But it can be argued that Stodard was so seduced by Aristophanes that she lost sight of whether his framework could sustain an entire evening. If not for Stodard’s endlessly imaginative flourishes and the energetic cast’s bottomless commitment, the show would have collapsed much earlier than it did.

Indeed, the last quarter to a third of the play – while likely faithful to Aristotle’s dramaturgy – just seemed to go on and on, riffing and riffing on the same point that the premise established early on.  And frankly, as much fun as it is to wallow in Stodard’s off-beat theatricality, sometimes even that wears out its welcome, dangerously teetering on the edge of being vulnerable to accusations of self-indulgent excess or, at least, an artist getting carried away. The tail of the festivities wagged the dog of the play so vigorously and so long that I’m not quite sure how the show ended thematically.

Whatever else you can say about the evening, it showcases Stodard’s considerable gifts as a costume designer with a comic vibe such as the glittering colorful gowns and jet black Medusa wigs that the women wear in the central portion of the play. Pitting an aging woman with a younger one as they vie for the sexual attentions of the next desirable man, one wears Disney’s Wicked Queen outfit while the other (a man) dresses as Snow White. Similarly, Joel de Sousa’s fluid lighting, Stodard’s sound design and music choices, and Alyiece Moretto-Watkins’ set design are consistent extensions of Stodard’s vibe.

Doubtless, Thinking Cap devotees will gorge themselves happily on every second. But for those wanting something more effective, a little more sculpting and shaping would have improved the experience.

Women In Assembly runs through March 18 from Thinking Cap Theatre performed at The Vanguard, 1501 S. Andrews Avenue, Ft. Lauderdale, www.vanguardarts.org.  Showtimes 8 p.m. Friday-Saturday, 3 p.m. Saturday, 5 p.m. Sunday.  Running time 1 hour 45 minutes including one intermission. Tickets, $35.  For tickets:www.brownpapertickets.com/event/2922381 or thinkingcaptheatre.com or (954) 610-7263. Sunday talkbacks with the cast, director, and a guest speaker for free for season passholders and a $5 admission charge for other patrons.