No Argument: Fighting Over Beverley Shouldn’t Be Missed 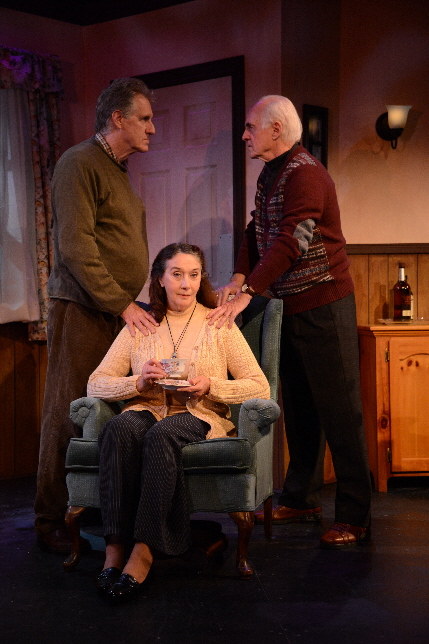 Entirely well-acted, thoughtfully directed, in a evolved play about past loves we can’t leave behind, Fighting Over Beverley by Israel Horovitz has its way way off Broadway tryout at Theatre at Arts Garage.

Horovitz told me at the back of the Arts Garage theater that he believes this final workout of his play is now ready for the Great White Way. He may very well be right, albeit there are probably a few places to make a few slight nips and tucks.

“Passion is in the air, as thick of mustard,” as one of Horovitz’s characters says in Beverley, the story of a 70-year-old former British pilot who decides, after 52 years, its time to reclaim the love of his life. Archie Bennett (who is sometimes also called Arthur), played by Dennis Creaghan, was engaged to marry fellow Brit Beverley during World War II “as the bombs were dropping,” she says. But when an American war hero swooped in and swept her off her feet, she became Archie’s runaway bride and his long lost love. He never married and kept Beverley more than close to his heart.

Now, it’s Archie’s time, to go to the States and visit Beverley (Sandra Shipley) and her husband, Zelly (Paul O’Brien) and bring his former betrothed back home. Meanwhile Beverley and Zelly have been married for five decades and have a grown daughter, Cecily (Erin Joy Schmidt). They’ve made their life in the small town of Gloucester, Mass. (Horovitz’s go-to setting) and settled into retirement age. Archie’s nostalgic visit to announce to Beverley that “he’s had you for 52 years. Enough is enough” has a ripple effect throughout the family and has each character looking at their own past for revelations as to how they’ve arrived at this point in their lives.

While the main plot centers around septuagenarian love, Horovitz has crafted a play that is more about personal soul searching than interpersonal connectivity. What are the consequences of our choices? And how will they stick with us? When Cecily enters the picture, having fled from her third husband, she faces the same burning questions. And, her biggest fear is to become a daughter who ends up mirroring her mother’s life.

Gloucester Stage Company debuted Beverley in 1993 and revived it in 2011 after Horovitz gave his script a tune up. The 2014 premiere at Theatre at Arts Garage is yet another reworking of the script. “This is a very different play now,” Horovitz told me at Arts Garage’s opening night.  The play was previously produced at the Fountain Theatre in Los Angeles and the Odyssey Theater, on BBC Radio 4 with Rosemary Harris as Beverley and by Hudson Stage Company in Westchester County, N.Y. Horovitz and Louis Tyrrell had plans to produce it at Florida Stage, but before that could happen, Florida Stage closed its doors.

It gets its day at Arts Garage with Tyrrell directing the top-notch cast that includes Shipley as Beverley and O’Brien as Zelly who played the roles in the Gloucester production, and in various workshopped readings.

Shipley as Beverley is the dutiful wife, who put her own needs and wants aside to be a good American wife and mother. The actress conveys so many emotions in her words, yet keeps them controlled until Horovitz’s dramatic arc gives her a platform to rise to the occasion. Her delivery possesses subtle gifts throughout that move the action forward to fine crescendo when she has her revelatory moment.

O’Brien as the brusque North Shore patriarch, who rules his home like he’s king of the castle, infuses Zelly with just the right amount of bully and swagger. When his knee-jerk reaction is to take Archie outside to physically spar to settle the fight over Beverley, O’Brien plays Zelly so true to character, there’s no doubt this would be the instinct. O’Brien carries an interesting, contained heaviness as many of his secrets begin to be revealed. It’s a superb slow-burn character study.

Creaghan puts just the right spark and vigor into Archie – playing the English visitor on the surface as a congenial, devil-may-care jester, yet he’s plodding, manipulating and ingratiating as he goes balls to the walls to do whatever it takes to claim his prize.

Schmidt, who conjures close to the character she played in last year’s Actors’ Playhouse’s Other Desert Cities (there are a few similarities in this family dramedy to Jon Rabin Baitz’s play), is a worthy choice for the role. She’s able to capture the stubborn arrogance of Zelly with the inherent helplessness of Beverley to create a character who acts as a mirror to the dysfunctional household.

Richard L. Crowell’s scenic design captures the homey feel of the lived-in New England home, while David Nail’s lighting design bathes it in homespun light. Michael Kelly’s nostalgic tunes in between acts, plus added nuances of seagulls and a whistling tea kettle in the kitchen rounds everything out. Erin Amico’s costuming speaks to the characters stations in life and adds a dimension to the overall palette of the production.

Tyrrell nurtures Horovitz’s dialogue, directing his actors in such a way that the words remain the primary vehicle in which to move the action forward.  It is a subtle shimmer that makes the piece shine.

With a few snips in some of the too-long monologues, and an ending that may be just a bit too tidy, there’s no argument that Fighting over Beverley will continue to ascend. Should it end up on Broadway, Arts Garage audiences will be grateful they were invited to participate in seeing this play develop. It certainly is a theatrical gift.