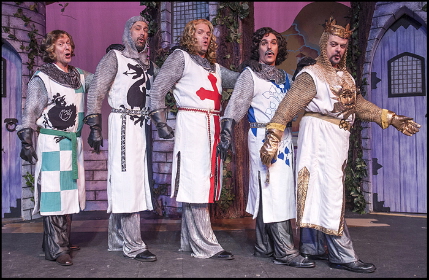 Even when you know the French are about to toss une vache over the parapet, even when you already know what Sir Robin will advise is crucial to a successful Broadway show, even when the sound system undercuts many scenes, the exuberance of everyone involved with Actors’ Playhouse’s edition of Spamalot is so infectiously joyous that the audience can’t help but be won over.

A delightfully demented cast enhanced by the inventive imagination of chief jester/director David Arisco and choreographer Ron Hutchins make this a satisfying pleasure even on its fourth or fifth visit to South Florida.

Some might suspect that the resplendently silly script and songs of Monty Python’s Spamalot would be hardy enough to survive repeated viewings because it’s based on the film Monty Python and the Holy Grail, which fans have seen dozens of times. In that case, part of the cinematic pleasure was luxuriating in the knowledge of what daffy nonsense is coming.

But oddly, a bit of the bloom is off the English rose in the theater, much as The Book of Mormon lost just a smidgen of its anarchic shock value if you saw it on Broadway prior to its unassailably fine national tour. A whiff of dejadeja déjà vu pervades the musical version after numerous tours, even a local pro-am production last year at Entr’acte Theatrix in Delray Beach.

That only makes Actors’ Playhouse’s accomplishment all the more laudable for touching every one of the bases that the Python fans expect and yet make it all seem pretty fresh.

Economics have forced Actors’ Playhouse to cut back to one blowout musical a year, but they have chosen unerringly in recent years what properties to put their resources into such as last year’s In The Heights and now this.  The result is a production that feels as if no expense was spared.  There’s a moment near the end of the production number “The Knights of the Round Table,” which sports a Las Vegas-style finale when a cast of 20 are dancing shoulder to shoulder from one end of the proscenium to the other, garbed in Ellis Tillman’s hilarious array with smiles beaming like floodlights and warbling to the full-bodied sound of a live eight-piece band.  The only adjective is glorious.

For those living in survivalist camps in Montana for the past four decades, Spamalot is the 2005 Tony-winning musical comedy directed by Mike Nichols and “lovingly ripped off” from the 1975 non-musical film. It is a surprisingly deft melding of musical comedy memes with the sui generis nonsensical humor of the British troupe whose television series made Lewis Carroll’s absurdity seem logical by comparison. The music and lyrics were written by Python alumnus Eric Idle and John Du Prez, with a script by Idle based on the film script written by the whole Python clan.

It follows the quest of King Arthur as he gathers prospective knights and sets off to search for the Holy Grail. But like the film, this is solely a framework on which to hang a succession of scenes that lampoon a wide array of topics and especially the more staid conventions of mainstream musical theater.

Arisco has well-honed skill with fine-grained comedy, in full evidence here. While he works out much of his zaniness before rehearsals start, he is reportedly open to contributions, so it’s hard to know who is responsible for what. But several people in the audience said at intermission and afterward that they didn’t remember seeing such-and-such a bit before. For instance, when the French knights leave their castle to attack the Brits, they are followed out the portcullis by broad Franco-icons such as can-can girls, Napoleon, Marcel Marceau and French Legionnaires all dancing their hearts out. But this time, Eponine from Les Miz follows them out, weeping too hard to be dancing – a little extra present for those who have seen the bit before. If Arisco didn’t think that one up, he gladly incorporated it.

Amping up the feeling of the originality is the work by Hutchins who is having a hell of a year from Pippin to 42nd Street. Even when some bits are dictated by the script, such as quoting Jerome Robbins’ bottle dance from Fiddler on the Roof, Hutchins brings his own stamp and plié while joyously embracing every Broadway chorus line move and adding daffy runs at tap dancing knights, disco infernos, an arty pas de deux between a friar and a nun, even a bit of Michael Jackson’s “Thriller.”.

The performances shaped by Arisco were simply marvelous. Four-time Carbonell winner Gary Marachek frequently earned praise as one of the Playhouse’s more inspired clowns and he was the perfect choice for Arthur. Stocky and a bit less than medium height, he is completely wrong visually as the majestic King of the Britons and therefore dead perfect for this show. His rubbery face gaily and appropriately mugs more scenes than criminals assault tourists in Central Park. When he stands legs spread apart, fists at his waist like a risible Colossus of Rhodes, his eyes have that demented gleam of fatuous pride in unearned Divine Right, topped by a broad grin of self-satisfaction and sometimes topping it with an arching right eyebrow.

He is matched by Lindsey Forgey as The Lady of the Lake (leading her Laker girls). Ever since we saw her in Slow Burn Theatre Company shows, we’ve been watching her talent and skill swell with increasingly more challenging roles, most recently in Urinetown, Xanadu, The Savannah Disputation and Assassins. With a statuesque figure, a Mermanesque belter’s voice and a daffy mien, she has a theater comedienne’s chops.

The other six “leads” are mostly members of Arthur’s Round Table, but each play three to five parts and it is a pleasure to see actors better known for straight roles allowed to indulge their uninhibited comic side. As Arthur’s put-upon squire Patsy, Paul Louis (Real Men Sing Show Tunes) couldn’t be bettered for exuding the woebegone aura as well as nailing the faux English music hall ditty “Always Look On The Bright Side Of Life” stolen from the Pythons’ The Life of Brien. The sturdy Jim Ballard (who played the priest in Doubt last season) is the muscular Lancelot with a hidden feminine side — as well as the Gallic-drenched French Taunter and, atop some acrophobia-inducing stilts, as The Knight of Nii. Shane Tanner (the wounded soldier in Fear Up Harsh) has the proverbial field day as the politically-inclined peasant and later noble knight Galahad, the soon to be limbless Black Knight and the Visigoth-ish father of Prince Herbert.

Gabriel Zenone (Sylvia St. Croix in Ruthless) is the musical theatre geek Sir Robin among others, and he has that great number about who you need to have a Broadway hit – which has some of the wittiest lyrics this side of Porter and Sondheim. Musical veteran Wayne LeGette, who would have made a fine Arthur himself, is Sir Belvedere, Mrs. Galahad and Lancelot’s squire. Jose Luaces is the impossible fey Prince Herbert, tweedy narrator and the peasant afflicted by the plague who sings, “I’m Not Dead Yet.”

Perhaps the spectacle on the stage makes some audience members oblivious to the essential contribution of musical director David Nagy who has led the singers in their choral work and headed up the aforementioned band that sounded not just flawless but unusually substantial, including Karen Nagy, Rupert Ziawinski, Brian Sayre, Andrea Gilbert, Chas Reskin, Jason Pyle and Stanley Spinola.

The ivy-covered turrets and parapets was designed off-campus by Jim Hunter, but Arisco asked for so many extra set pieces that the theater’s staff gets a well-deserved credit in the program under the tutelage of Tech Director Gene Seyffer..

For all its fun, the show is a technical nightmare awash in elements such as animated projections and copious sound cues, so some credit goes as well to Production Stage Manager Carl Waisanen, Production Manager Carlos Correa and Assistant Stage Manager Josh Dobarganes who probably aged a few years on this show. Not everything was perfect. Luke Klingberg worked hard to provide an unusually fluid and varied lighting plot, but actors standing near the front of the stage and stage left got lost in half-light.

And the sound during the production was a mess opening night, hopefully something that can be fixed as the run continues: muddy unintelligible lyrics, microphones cutting in and out at especially crucial times, crackling, dropped cues, feedback, a laundry list of problems.

Tillman drew most of his wardrobe with an experienced eye from the cavernous opportunities in Costume World, but he doubtless gussied them up. There must be over a hundred costumes being changed in and out of in seconds – it’s unlikely there’s a yard of Velcro left in Coral Gables this week.

As hoped for, Spamalot is just a huge dollop of mindless unapologetic fun.