Not Just Another Day At The Office: GableStage’s Caustic, Whipsmart Dramedy “Gloria” 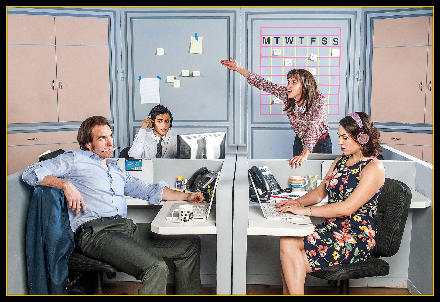 Can’t we just get along? From left, Clay Cartland, Phillip Andrew Santiago, Lai-Si Lassale and Sheri Wieseman are colleagues in GableStage’s Gloria

At some workplaces, employees indulge in healthy rivalry, support each other professionally and personally and, sometimes, forge deep friendships that last long after the job has ended. That is not the kind of environment the editorial assistants toil in the caustically dark dramatic comedy Gloria, getting a whip-smart production at GableStage in Coral Gables.

Office politics, hurtful gossip, blind ambition, bullying, backbiting and pure hatred seep through the office of a New York magazine in which these young editorial assistants jockey for better jobs while undermining co-workers. But playwright Branden Jacob-Jenkins’ Gloria, a Pulitzer Prize finalist in 2016, also penetrates deeper as it touches on how a person recovers from horrific events, the need to make connections and the destructive nature of self-hatred. It will also make you wonder just how well you know your coworkers and how a little kindness and compassion can make everyone’s life a little better.

Director Joseph Adler has assembled a cohesive cast, each of whom shines and manages to find the humanity in these mostly unlikable characters.  No matter how we respond to these characters, we definitely want to find out what happens to them. The kinetic energy never falters as Adler keeps his cast on point throughout Gloria.

The titular Gloria is considered the “office freak” and “an emotional terrorist.” A   copy editor who has been there longer than most at the magazine, Gloria doesn’t seem to connect with anyone. Dowdy and depressed, Gloria (Katherine McDonald) is like a ghost, skulking through the office, the butt of many jokes. She had thrown an elaborate party the night before, complete with catered food and a bartender, yet only about four people bothered to show up. Gloria makes only a couple of appearances, yet they are crucial cameos.

Glib, self-centered Dean (expertly played by Clay Cartland) was one of Gloria’s few guests at her “sad” and “awful” party. Dean shows up late, as usual, and hung over, also as usual.

And the workday begins with bile banter, much of which cuts deep, volleyed among Dean, Ani (Sheri Wieseman) and Kendra (the volatile Lai-Si Lassalle) who thrives on berating everyone else about their job but who herself has little prospects. The intern Miles (Phillip Andrew Santiago) keeps his headphones on most of the time as he wraps up his last day there. Every now and then newly promoted fact-checker Lorin (Cliff Burgess) storms out of his office down the hall, begging everyone to keep quiet as he is pushed to the brink to work on a last-minute profile of a pop singer who has just died from an overdose.

And then the day takes a dark turn and suddenly this cutting conversation isn’t so important any more.

Gloria is set over the span of two years with the second act beginning eight months later and ending nearly 18 months since the first act.

Jacob-Jenkins’ strong script is elevated by the vigorous cast, each of whom bring a sense of reality to their roles, making the audience members believe these are their coworkers. Cartland and Lassalle have the showiest roles, and while they deliver strong performances, they wisely do not overwhelm the production.

Cartland begins as a party boy, the lord of the office who loves holding court, soaking up the gossip and the poisonous talk even when directed at him. In the first act, Cartland shows a Dean who thrives at being the center of attention, but, at the same time is at heart not happy with himself. But in the second act, Cartland expertly transitions to portray a man who is clearly broken, who has lost any sense of self he might have had, and may even be aware that any dreams and hopes he once had will never be resolved. And Cartland does this despite sporting the unbelievable beard in the second act.

Lassalle’s Kendra maintains a verbal rodeo as she tears down her co-workers, belittles their ambitions and derides their personal lives, while also showing her contempt for the magazine and its head editors. Each insult is subconsciously aimed at herself, though Kendra isn’t self-aware to know this. Her change in the second act is believable as this is a woman who would rather tear down others than examine her own actions.

Burgess’ Lorin—way too stressed about the noise and this dead pop star—comes across as meek, always with his head down, looking for errors. But Burgess brings an intelligence to his role as he shows that he is astutely aware of what is going on around him.

Each actor plays two or three characters during the course of the two-act play and each makes smooth transitions. McDonald, who exceled last year as a calculating workaholic in GableStage’s Dry Powder, effectively tamps down her persona as Gloria but later delivers an effectively emotional memory as chief editor Nan. Kudos also to  Santiago, who easily goes from an intern to a barista to a movie producer, and Weiseman, who smoothly moves from her roles as an editorial assistant, an editor and, later, a receptionist.

Lyle Baskin makes the best use of the petite stage with a copy machine on one side and constructs his office set with four cubicles dressed by Beth Fath with the tchotchkes that would adorn typical desks—coffee cups, bobble heads (of Dwight from the TV comedy The Office), bright rose headphones and a white-board reminder to call Clara at 4 p.m. In the second act, the office morphs into a Starbucks authentic down to the crumpled napkins and then becomes the reception area of a production company. Ellis Tillman’s costumes, Steve Welsh’s lighting and Matt Corey’s sound/music design enhance Gloria.

Gloria is the second play by Branden Jacob-Jenkins to be produced in South Florida with Area Stage delivering a rousing version of his controversial An Octoroon.