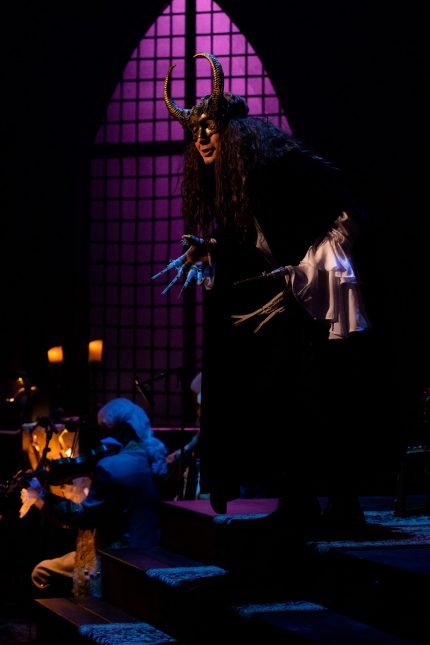 Maxime Prissert as half of the title couple in Area Stage’s unique vision of Beauty and the Beast / Photo by Morgan Sophia Photography.

I thought I was done with Beauty and the Beast.

Having experienced two or three regional productions of the Academy Award-winning film-turned-stage musical, I assumed it was one of those contemporary warhorses that precluded individualistic interpretation. You know the shows—ubiquitous crowd-pleasers like Mamma Mia! and Avenue Q—that are so driven by audience expectations that deviation from the brand is all but unthinkable. In the same way, how could any production of Beauty and the Beast approach the material with a fundamentally new vision without, to borrow some political argot, alienating the base?

Area Stage has managed to square this circle and then some. There is a reimagining, and then there is director Giancarlo Rodaz’s visionary, deeply moving new production. It’s still Beauty and the Beast, but it’s as radical a restaging as John Doyle’s 2005 version of Sweeney Todd. For one, it doesn’t simply integrate immersive details into a typical proscenium staging; rather, there is no stage. The cast and the audience share exactly the same space, with all of the risks and rewards this decision entails. Further, this one space must convincingly encompass the myriad locations, so clever props and a reliance on figurative over literal visuals are paramount to its success.

You could call it a grownup production of a kid-friendly play, but in a way it’s the best sort of children’s theater—the kind that doesn’t condescend to its pint-sized demographics, that believes their intelligence is elastic enough to process that a sheaf of gradually diminishing red paper can signify a wilting rose, or that a woman carrying a feather duster is, in fact, a feather duster herself. After about 30 seconds of seeing the supporting cast hold their respective items rather than dress up in cartoon replicas of teakettles and candelabra, the traditional paradigm just seems silly and cumbersome.

The production asserts its difference even before you step into the Arsht Center’s Carnival Studio Theatre. Stagehands in period regalia and diction invite attendees through the show’s “magic door”—actually a set of double doors that opens on command, ushering them into a fully transformed theater. Instead of conventional seats, three sprawling wooden dining tables with communal benches span much of the playing area. This is where most of the audience members will sit, as if preparing for some extravagant castle fete.

It is indeed a castle, designed with transportive affection and granular detail by Frank Oliva, from the pillars and arched windows to the gleaming coats of armor standing like sentries on either side of the “magic door,” which is opposite a velvet-lined throne sitting below an exotic tapestry. On either side of the throne are members of the five-piece band—pianist, reedman, two string players and percussionist—dressed in the periwigs and frilly costumes of many a bygone court musician.

Liberated, in a way, from the pit, these most visible artists, under Rick Kaydas’ musical direction, will perform new, stripped-down arrangements of Alan Menken’s music that sacrifice none of the composer’s sprightliness or grandiosity; as with the minimalist costuming and scene changes, it’s another way in which Rodaz convinces us that less is more. All of these revisions result in a lean and crackling Beauty and the Beast, one that feels as propulsive—as always in motion—as a sung-through show. Even the book parts move with a melodious energy.

The actors perform around, abutting and especially atop the central tables, with much of the dancing, fighting and loving commencing on spaces where theatergoers are told, imperatively, not to place their hands. The cast, chockablock with refreshing new faces to South Florida professional theater, includes a radiant Yarden Barr as Belle and Maxime Prissert as Beast, who plays his character hunchbacked, bitter and, in a calculated decision, short on the comic relief that previous Beasts have favored.

Creatively endowed with extended clawlike hands and an oversized horned headgear—but not the over-the-top, blue-masked grotesqueries of previous beasts—Prissert is a tortured soul, and we feel his agony like an open wound for all the world to see. When he sings “If I Can’t Love Her,” it’s a triumphant vocal moment for Prissert, but for the Beast, it’s more than a cry for help; he sounds positively suicidal.

Frank Montoto, deftly doubling as both Lumiere and Gaston, plays the latter villain pitch-perfectly. Certain other Gastons have stressed only the toxic masculinity, turning him into such a caricature that it’s implausible that the village’s peasant girls throw themselves at him. Montoto is as much the charmer as the misogynist.

The ringer in the cast may be Imran Hylton, who, while not exactly old enough to play Belle’s inventor father Maurice, creates an indelible presence—clad in aviator goggles and a shock of white hair—in what could have been a forgettable supporting performance. Hylton’s duet with Barr, “No Matter What,” is an unexpected highlight, and you can see why their closeness in age is hardly an issue: Their chemistry is unbeatable. In no other production I’ve seen has the father-daughter bond been driven home with such poignancy. (Hylton is also a hoot as Madame, in this case the gender-fluid dresser who spruces up Belle’s wardrobe.)

All along, the audience becomes part of the experience. Thanks to the breathlessly hardworking, ninja-like ensemble, we are given steins of beer to clatter onto the table during the rousing “Gaston,” and books to hold aloft when Belle first steps foot in the Beast’s library, the moment that signals the crucial shift in their relationship.

These are simple acts on our part, perhaps, but by involving us in the drama rather than positioning us as spectators of it, our emotional involvement increases tenfold. When we’re in the mix too, the passions are operatic, the humor is infectious, and the stakes have never seemed higher.

In a production this urgent, we are reminded that the issues of 1740s France are today’s issues. In the epidemic of isolation in which we now live, the most transcendent line of dialogue is delivered by the outsider Belle to the outsider Beast: “I know how lonely it can feel to be different.” Later, when Gaston rallies a frothing mob to storm the castle and break down its doors, it is impossible not to think of, let’s just say, current events. Rodaz takes Beauty and the Beast out of the fairy tale and into the flesh.