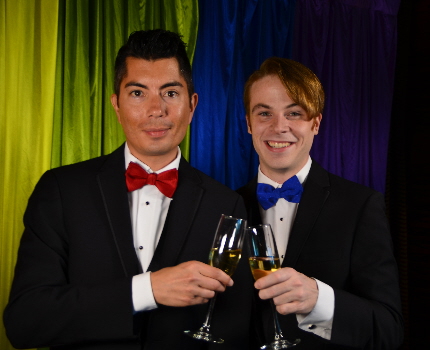 At the end of March in 2016, Matt May and Jennifer Sierra-Grobbler had a coming out party for their original show, the interactive gay wedding theatrical experience Diego & Drew Say I Do. It had a successful two-week run at the Broward Center’s Abdo New River Room. Now it’s back for a second go ’round. It has grown up just a bit in its second incarnation with a stronger cast and better comic timing throughout.

For this to be a breakout hit like the popular Tony ‘n Tina’s Wedding, of which it has the same premise, Diego & Drew Say I Do needs more novelty, something that sets the bar higher. While it sure is fun, it isn’t particularly memorable. What it does have is a lot of energy and plenty of moving parts.

Like Tony ‘n Tina’s Wedding, which got its start in New York in 1988, Diego & Drew Say I Do invites audience members to “participate” in the short wedding vows and longer reception of the gay marriage of Diego Torres (Benny Antipuna, reprising his role) and Drew Boudreaux (Eric O’Keefe, reprising his role from the last run, too). They met at Georgie’s Alibi, the popular Wilton Manors gay hot spot (should the show play regionally – filling in the popular gay hot spot from that town would be a snap. And, it adds a sense of place.)

The original TNT in New York would start outside the Washington Square Church, the head to Carmelita’s Restaurant on East 14th Street. Here we are in a banquet hall somewhere in Fort Lauderdale, decorated with two cut out swans, rainbow curtains, bling chandeliers, and two large D’s on each side. “Guests” are seated either to the left on the Torres family side or to the right on the Bodreaux family side, however which side you are seated on as a guest doesn’t have you on either side (might be something that could be added where the audience does have a vested interested on the side they are placed in).

The drama in the comedy is that Diego and Drew and their families come from very different cultures.  The Torres are of Puerto Rican descent; the Bodreaux’s from the deep South, and they have Southern accents to prove it.

Interestingly, three years ago, there was some newness and urgency to the plot – two men being married and we are all invited to attend. It seemed more novel, for some reason three years ago. Now, gay marriage doesn’t raise as many eyebrows. There’s currently a gay man running for President and we could have the very first First Man. However, it still raises some ire, which Diego & Drew Say I Do prove. Big Daddy Boudreaux (Mark Krocyznski, another return performance) comes from a different era and he just can’t understand “two men getting’ married.”
Speaking of political climates, there are places where the update of the show doesn’t seem to take advantage of current situations. Somehow, it feels dated, like we aren’t in 2020, but have taken a short trip back in time. Maybe 2015 when the U.S. Supreme Court struck down all state bans on same sex marriage? And that was a big statement and a big event. An exact time period might help us settle into time and place.

Diego’s Dad is a proud Republican. Santiago Torres (Cesar Arguelles) wears a tie that bears the colors of the Stars and Stripes.  Big Daddy is too. The political landscape has certainly changed since the first appearance of this show. Since a day doesn’t go by that the news is dominated by politics, perhaps there is a way to update the script to build some friction in. The script is fluid enough that when and if the landscape changes, that commentary could be built in.

Perhaps the boys need to confront their conservative families, comically of course, in the same vein as the rest of the show or punch up the drama by having relatives on different sides of the political aisle. Not to say D&D’s writers haven’t done this, but it is just a smidge. Big Daddy has a current line that may not have gotten the laughs a few years ago that it did on opening night: “I was wound up tighter than Kelly Anne Conway’s panties.” Same with his proud display of a Donald Trump button.

There are some bits that are timeless, however, such as Drew surprising his new husband with a reception appearance by boy band heartthrob Vance Treble (Jordon Armstrong), which the scriptwriters have also used as a device to incorporate an Emcee.

R. Kent Wilson returns to the current cast as the officiant who fills in for a missing priest as drag show diva Raven Evermore. Wilson’s performance is every bit a scene stealer and one of the best skits in the show. Skits they are, because theatrically, shows like TNT and D&D are put together in chunks, with musical interludes helping to segue one scene to the next.

The musical interludes take the form of the audience joining in on the dance floor to dance with the cast — pop hits such as Lady Gaga’s “Born This Way” or another club hit. Then there are the scripted songs belted out by a family member who wasn’t on the bill as a wedding singer. Tia Maria (Stephanie Sandoval) has written a song for her cousin, Diego, that gives away embarrassing details of Diego’s growing years, and Tia’s too.

The social media maven Stacy Nicole Masters (Michelle Caravia) sings “Up Where We Belong,” and Shelby (Christina Groom), Drew’s high-school sweetheart who still pines for their young love, goes berserk as she grabs the microphone and takes off in a drunken solo. Groom’s display of physical comedy in this number is absolutely a showstopper

Sabrina Lynn Gore is Drew’s cougar mom, Virginia Hollingsworth, who has recently auditioned for a spot on New Housewives of Lighthouse Point, a creative local call out. She’s arrived at the wedding with her much younger boy toy, Bo (Robert Ayala) who shocks and awes in the final scenes. She sings a wonderful duet of “Maybe I’m Amazed” with the boy band hottie. Ayala is another standout in this show as the Southern boy who has a secret.

Jesus Reyna as Chauncy Davenport, the wedding planner, handles the task while sprinkling gay one liners throughout the show like one would toss out rice at a wedding. He’s also in charge of making sure that everyone gets to the buffet on time. Yes, you will have dinner, so no reason to stop before the show. The food is Puerto Rican meets Southern specialties  – arroz con pollo, shrimp and grits, cornbread and succotash, and, of course, wedding cake, are served. That the catering staff at the Broward Center has to put this shindig on every time the show plays is an exceptional feat.

Madelin Marchant is Diego’s sweet mother, Luis Albaer is Max Torres, who thanks his brother, Diego, for teaching a straight guy gay pop culture; he thanks his brother for filling him in on Patti LuPone’s place in the gay world (perhaps there’s a more relevant gay icon to place here – the joke falls flat if you don’t know who LuPone is.)

Steven Chambers is Drew’s dad, Andrew, who harbors a secret, too, but you’ll have to wait until the surprise ending of the show for that. Hint: If you haven’t guessed what it is from the beginning, your gaydar is off.

Diego and Drew Say I Do is a conga line full of fun (yes, there is a conga line and you can get your fill of the participatory and now perennial wedding dance, Cha-Cha Slide, too). The original direction was by John Manzelli.

This immersive experience works best when the audience is up for the task of diving in, drinking (there is a cash bar) and dancing. For those more apt to sit on the sidelines, this might be an invitation to decline.