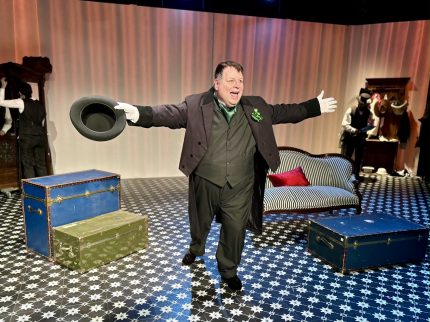 A love of language and a love of theatricality meld in Thinking Cap Theatre’s ingeniously staged re-interpretation of The Importance of Being Oscar, a celebration of Oscar Wilde.

The trio of actors, director and creative team embraces and elevates Wilde’s words of wit and wisdom as if playing glorious music.

The script sketches out a biography of the Irish genius. But it savors his poetry, stories and plays, delivering them with an infectious stylized yet presentational style.

This 1960 play written and performed by the acclaimed Irish actor Michael Mac Liammóir was created as a one-man evening which played Broadway and toured the world.

But Artistic Director Nicole Stodard has always re-imagined works to find new depths and dimensions. Thinking Cap staged The Importance of Being Earnest with gender bent casting set in a 1978 disco bar.

In this case, Stodard puts local actor Ronnie Larsen center stage as Wilde re-telling stories and uttering his witty aphorisms like “Fashion is what one wears oneself. What is unfashionable is what other people wear” and “Murder is always a mistake. One should never do anything that one cannot talk about after dinner.”

But he is joined by two “other” Oscars, Bree-Anna Obst and Travon Pierre as a sort of aides de camp who each provide a third of the storytelling that Mac Liammóir had previously uttered by himself on stage.

The fact that Obst is a woman and Pierre is Haitian-Puerto Rican underscores the sense that Wilde’s life and lessons are universally applicable across gender, identity and ethnicity.

The duo are crucial because between the biographical narrative, the play recreates scenes from “The Picture of Dorian Gray,” An Ideal Husband and Earnest with the two providing a swath of different characters. For instance, Pierre portrays Dorian while Wilde/Larsen gets all the great epigrams as the sardonic Lord Henry.

Joy suffuses the first half of the evening, not just the iconoclastic convention-snubbing inherent in Wilde’s work, but in Stodard and Co. having a hell of a good time finding highly theatrical ways to present it.  For instance, when Larsen recites poetry with the other players illustrating the piece, he does so into a hand-held microphone like the rock star might yearn to do today. 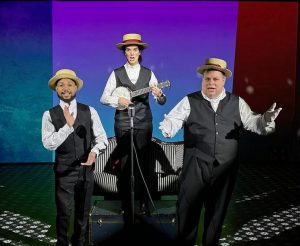 The evening must show Wilde in his tragic time in jail, reading the solemn pain-filled “De Profundis letter.” But quickly, the jaunty tone resumes when the trio presents “The Ballad of Reading Gaol” singing in a kind of vaudeville musical number with everyone wearing straw hats and Obst strumming along on a banjo – a poem written about an execution in prison.

Indicative of Stodard’s boundary-breaking vision is when Wilde leaves Ireland for England, the accompanying music is The Clash’s “London Calling.” When Wilde lectures to Colorado miners (which he did) his audience is dressed in Halloween-type cowboy outfits including Stetsons, red kerchiefs and a toy gun.

Obst and Pierre provide vibrant full-throated support and two score sharp cleanly differentiated characterizations that can shift in and out in a moment.

But obviously the linchpin is Larsen who has been gaining acclaim during the past few seasons as an actor-playwright-producer, most recently in The Actors. While keeping in the jocular exterior, he dives deep into the multiple facets of Wilde’s complex personality. Long before the sense of confusion and betrayal in the prison scene, Larsen allows us to see the sadness of someone whose celebration of being an outsider is rooted in knowing he can never fit in.

Still, given the chance to play Lady Bracknell in the classic witticism-soaked interviewing scene with Jack, Larsen has a field day.

A consistent hallmark of Thinking Cap productions, even when the actual piece elicits a wide range of audience receptivity, is the unique and outstanding visual and aural design elements, many of which are the work of Stodard and Obst, plus a cadre of dedicated colleagues.

Most notable (and a common mechanism for this company) is the use of projections on the back wall to set tone, mood, sense of place – a wide field of flowers, an ornate pattern of wallpaper found in a drawing room, and especially the picture of Dorian Gray which indeed grows older but then explodes in blood when the artist Basil is murdered. Local award programs finally are recognizing the growing use of projections in local productions, and few do it as well as Stodard and Obst.

Stodard’s carefully designed Victorian suits with vests, top hats and white gloves are primarily black-and-white, but with flashes of color as the other characters add a hat or a cape.

Thinking Cap is committed to fresh, risk-taking adventures. Some don’t land as well as it hopes; others like the superb Happy Days, Vita and Virginia, Lizzie: The Musical and A Public Reading of an Unproduced Screenplay about the Death of Walt Disney broaden the audience’s definition of what theater can be when you take off the blinders of traditional expectations.

A reminder: The former Fort Lauderdale company has moved its operations to MAD Arts Gallery in Dania Beach where it also has monthly “Uncensored” play readings. Parking is available across the street.