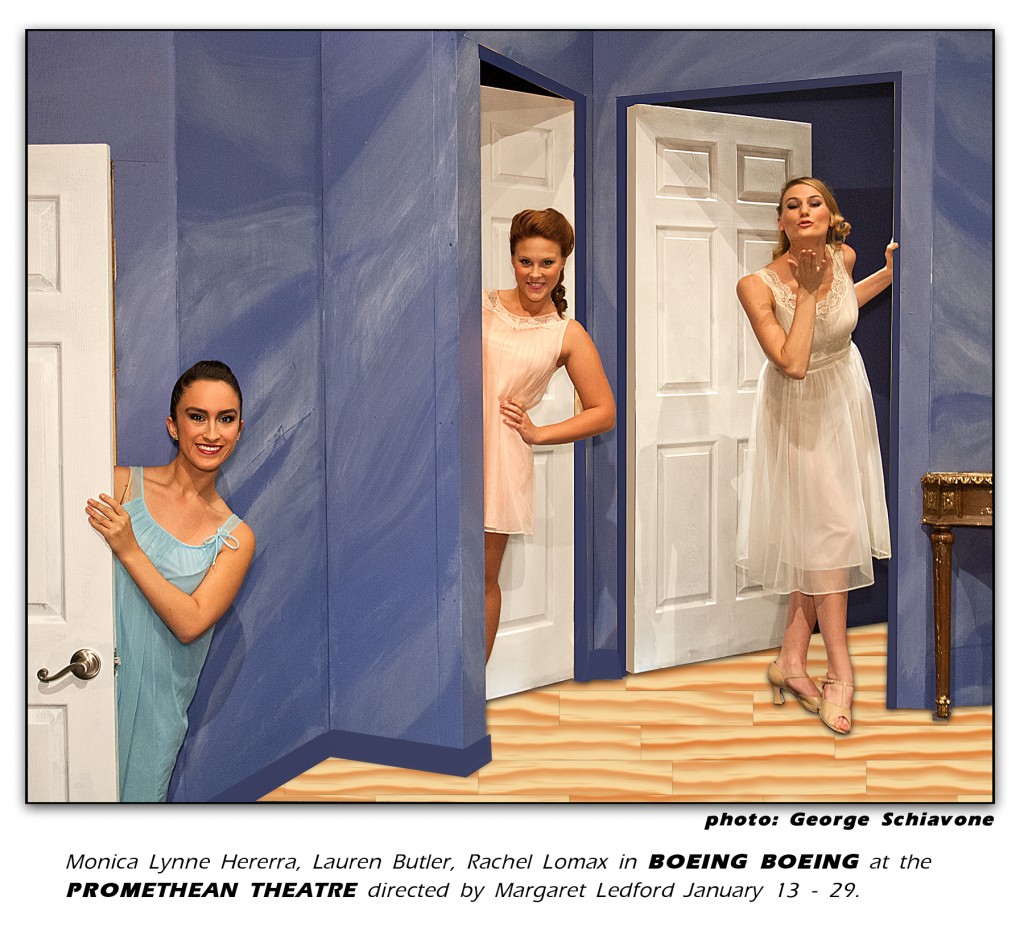 When you walk into the Promethean Theatre’s auditorium for the comedy Boeing Boeing, the first thing you notice about the playboy’s bachelor pad is the doors. Seven doors. One of them with two swinging gates. You’ve been put on notice.

Boeing Boeing is a 1962 farce with doors that slam, swing, shut slowly, burst open in ones, twos and probably threes if you wasted time keeping track.

Promethean and its house director Margaret M. Ledford, best known for thought-provoking dramas and campy summer musicals, enter new territory with an out and out comedy that requires skill and discipline. As proven by the copious laughter in the hall, they acquit themselves well.

There’s a nagging indefinable something missing that would make it a home run. Maybe it’s a tautness, that feeling of an intricate watch spring whirring. It even sags a few times. But overall, Ledford and the cast deliver as entertaining a comedy as we’ve likely seen this season.

The plot sets a situation precariously balanced on the side of a steep hill and then gives it a sharp shove. Bernard (Matthew William Chizever) is a suave American architect living in Paris with his acerbic French/German/Alsatian maid Bertha (Sally Bondi).

A visiting college buddy, the unworldly Robert (Mark Duncan), is wowed by Bernard’s unique arrangement: Bernard is engaged simultaneously (with no intention of marriage) to three stewardesses who are sleeping with him unaware of their competition: Gloria, the American flying with TWA (Lauren Butler), Gabriella, the Italian from Air Italia (Monica Lynne Herrera), and Gretchen, the German from Lufthansa (Rachel Lomax).

Bernard has calmly kept this ring-a-ding-ding arrangement humming thanks to the women’s serendipitously diverse flight schedules – which he updates by pencil into a little black book rather than a Blackberry (Remember this is 1962). “The whole secret is order,” Bernard brags.

It takes no imagination to guess what comes next. What matters is how well Ledford and the cast imaginatively embroider the script with facial expressions, physical comedy, hundreds of tiny moments of staging business, and above all, pacing.

Boeing Boeing glories in not having a shred of redeeming social value other than to make you laugh, although there’s the tiniest of bourgeois morality lesson about getting married — after you’ve sown your wild oats.

The script written by Frenchman Marc Camoletti and translated by Beverley Cross is one of those so-of-its-time mildly titillating farces like No Sex, Please, We’re British. The title comes not from the multiplicity of stewardesses (in which case there would be three Boeings) but likely from the bouncing sound effect you heard in the movies back then, boing-boing. It hopes to move so fast that you don’t notice truckloads of unlikely developments such as Gloria falling in lust with Robert because of the way his lips look when he says “It’s impossible.”

For those who only remember the lame 1965 movie with Tony Curtis and Jerry Lewis, be assured that hilarious farces rarely translate very well to film. Witness the limp cinematic version of the hilarious Noises Off.

Also take comfort that when it was revived in London and then New York a few seasons back, Boeing Boeing was considered the funniest thing to hit the boards since the aforementioned Noises Off.

While none of the roles present especially complex acting challenges (this is a flesh-and-blood cartoon after all) they do require timing and energy – both of which are delivered by this troupe.

Duncan gives Robert a sad-sack puppy dog expression that bespeaks a virginal loneliness. He starts just a little too nebbishy to be credible and his character’s reticence slows down the first fifth of the play. But when the plot heats up and Duncan has developments to react to, so does his performance. When he slowly takes advantage of the sexual situation himself, cautiously dipping a toe in the water, a sly grin creeps across his face.

Chizever puts across a carefree confidence in the early scenes and then the appropriately unhinged terror as it all comes apart. Bondi is just okay here as the put-upon, muttering maid. Her line delivery needs a little more snap and I can’t place what accent she was using or whether it was the same one from scene to scene. When her tamped-down maid and the equally tamped-down Robert have a scene alone together, the show wilts.

The women are as delightful as they are lovely. Herrera is soon to graduate from Nova Southeastern University where one of her teachers is Duncan. But she seems much older and more experienced an actress with her creation of the Italian spitfire who smolders and rages at her fiancé’s inexplicable behavior.

Butler, a recent Nova grad, is terribly funny as the supremely self-possessed, aggressive and lusciously sexy partner – a 1960 adolescent’s fantasy.

But the standout in the entire cast is the tall, willowy Lomax who chews up the scenery and everything else in sight with her wonderfully way over-the-top characterization.  Lomax, who has done the role once before and who was in a production of Noises Off, is a Teutonic take on amorous intentions as she declares in a stentorian voice, “I am passion itself.”

Her performance underscores the tone of the rest of the show: Boeing Boeing is a comical Rat Pack Roadrunner cartoon.