Punchline’s So Timely 50 Shades Of Hillary Is Raucous, Irreverent 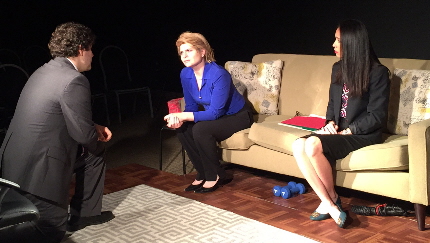 What are your feelings about Hillary Clinton? Love her? Hate her? Never heard of her? The handouts for Fifty Shades of Hillary claim all that doesn’t matter. It says here that this cabaret-style satiric musical from Punchline Theatre Company playing at Coral Springs Center for the Arts and later The Palm Beaches Theatre in Manalapan, is a “delight.”

Maybe. But anyone with even a dollop of regard for Mrs. Clinton is advised to tamp it down, sit there quietly and relish the machine-gun comedy and the high octane performances of these four remarkable actors.

Raquel Montesino as Hillary creates the tone right off, when she snaps, “The bus gonna leave without me? It’s got my name on it!” to an aide who wants her to get moving. We know this Hillary, the one the public isn’t supposed to see, is one abrasive lady, tough as a boot.

Montesino sets the little platform stage afire with Hillary’s early-morning workout, a stunning display of dance aerobics. “She sang her yes and danced her no,” as the poet would say, and one is amazed that Montesino has energy left for the rest of the hour. She has plenty.

A great deal of it is expended upon Mark Della Ventura’s Christian, who starts off as a blogger for “The Daily Left” and stays on as advisor in Hillary’s 2008 campaign. Della Ventura captures in a few lines and a few gestures the smiley helper whose perspicacity isn’t quite up to his confidence.

Christian is on the receiving end of the candidate’s behavior meant to link it to the soft-core S & M novel and film Fifty Shades of Gray. Here we learn the purpose of those handcuffs in the play’s advertising as Hillary cuffs him to a chair and announces, “Ready for a ride on the Hillary express?”

Christian’s advice to her echoes the old bit about the importance of sincerity, and if you can fake that you’ve got it made. Accordingly, Montesino offers a couple of hilarious campaign turns, wearing a cowboy hat in Tennessee and rabbinical garb in Boca Raton.

Kurtis Huntsinger gives a devilish performance as husband Bill back in his wide load days. Huntsinger even manages a porcine glint in the eyes, a clue that this show is interested in the dark side of the ex-president. He’s overflowing with observations about the stupidity and gullibility of the public. They – we – are dumb enough to believe any lie he tells them. Even that he’s eating healthy. Well, that turkey he’s scarfing is, like Hillary, “rough and dry.”

Hillary snarls a Monica Lewinsky reference – “It was just a cigar”– and reminds him, “Your ass belongs to Mama.” This is where the play’s hostility to the two politicians goes to overkill. There’s a feeling that this is purely hateful and they don’t deserve it. The machine gunning doesn’t let up, though, and we get sneaky hints that Bill isn’t really Chelsea Clinton’s father. And are we supposed to believe that Hillary actually threatened to murder a writer who told “the truth” about her?

Ashley Price as Huma, Hillary’s personal assistant, has the thankless job of creating a presence for a character who isn’t supposed to have a presence. She’s wonderful at it, conveying the hurt bafflement of one who knows she shouldn’t take the abuse to heart, but still . . .

The world premiere script is by company co-founder Gabriel Hammad.

If you can turn off your politics, you can admire what these actors have achieved on a tiny stage that is little more than a bump in the floor. The speed, energy and conviction of their performances should be seen. And, dammit, those digs at Bill are pretty funny.