Difficult But Intriguing Musical ‘A Minister’s Wife’ At GableStage 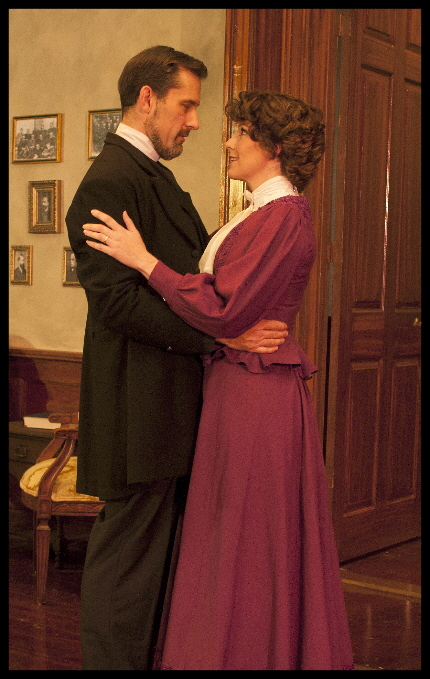 When a theater company like GableStage regularly dares to take risks so many other companies will not, there’s bound to be some triumphs, some failures. And then some produce mixed results as in A Minister’s Wife.

In this case, it’s not a question of the ability of the local artists, who give everything they have to pull off this intriguing chamber musical. It’s more the strange choice of a fascinating but flawed property that isn’t easy to love.

The 2009 operetta with a modern edgy sensibility is drawn from George Bernard Shaw’s 1893 Candida, a typically dizzying dense swirl of political philosophy and sexual politics. This reimagining streamlines Shaw’s three acts – some would say strips it – into an intermissionless 95 minutes that laser focuses on one aspect— the nature of true love in a mature relationship.

Within those limitations, A Minister’s Wife does justice to the titular heroine. She elegantly slices through the self-satisfied sexism of her adoring middle-aged husband and her adoring young suitor, employing the self-assured wisdom of Solomon facing the two women claiming to be the mother of the same child. In doing so, she and Shaw dissect and demolish the less-than-storybook Victorian conception of a relationship between a man and a woman.

What keeps the audience at arms’ length is the quirky score that weaves together music and dialogue so closely in such an unpredictable manner that it’s hard for the audience to embrace. The fact that it’s far from the traditional easily digestible stanza and chorus musical structure will make it intellectual catnip to some audiences and anathema to others. You’d expect no less from this, only the third musical attempted in GableStage’s 18-year history.

What rescues it, we would hope, for any patron is the work of the talented performers under the leadership of Producing Artistic Director Joseph Adler and Musical Director Eric Alsford. Plus, buried under the music is the raw material of Shaw whose iconoclastic vision of male-female relationships still has the power to upend expectations and challenge the status quo 125 years later.

Both works create a romantic triangle. Reverend James Morell (Jim Ballard) is a successful Anglican clergyman passionately involved in social reform. A gifted writer and orator, he speaks nightly to groups about a vision merging Socialism and Christianity. He is deeply in love with his equally devoted wife, Candida (Laura Hodos) who supports his work but has a keen intelligence and surprisingly independent spirit for the late 19th Century. But Morrell’s love is a quiet, oblique affection, reflective of his fondness of metaphor and rational thought.

Eugene has developed a world-class crush on Candida and eventually declares his unbridled passion for her. But the two men, without consulting her, presumptuously maneuver her into a needless position of having to choose between them. The resulting denouement is a brilliant Shavian puzzle journey of emotion and logic that dismisses conventional attitudes and challenges social preconceptions, even if the final choice may seem pre-ordained.

The play conceived by Michael Halberstam bowed in a Chicago suburb in 2009 and ran at Lincoln Center in 2011. The undeniably heartfelt lyrics, which border on operatic recitative (including lots and lots of repeated lines), are by Jan Levy Tranen. The book, which steals liberally from Shaw but not liberally enough, is by character actor-director-playwright Austin Pendleton (whose face you’d know in an instant from film and television).

The music is the most problematic element. Joshua Schmidt wrote the music for acclaimed cult musical The Adding Machine, based on Edgar Rice’s 1923 expressionistic nightmare. That work was a critical if not popular triumph for GableStage in 2009. But there, the intellectually piquing music fit the subject matter. Here, it seems like a poor fit. The soaring of pure emotions are at war with irregular meters and quirky runs of opera-like recitative. Schmidt has created varied tones for each character that is admirable yet a problem when trying to fuse them into a cohesive score.

It’s difficult to pinpoint why A Minister’s Wife fails to satisfy as much as the audience hopes. Something is missing. Start with the fact that the two men are such fools that you want the heroine to slam the door, although Candida is exactly the opposite of the sheltered submissive Nora in A Doll’s House. Then it’s arguable why someone would eviscerate and then musicalize Shaw. Next thing you know, someone will try it with Pygmalion.

You can’t fault the actors, who were insightfully chosen. Candida has to walk onto the stage a glowing presence of beauty, inner strength, intelligence and blithely liberated spirit. Then she has to maintain that bemused aplomb and affection as these adoring men presume to treat her as a prize that they have the right to claim. There are many fine musical actresses in South Florida, but we’d wager few could achieve this with the seeming effortlessness of the lovely and talented Hodos.

She is especially effective in creating someone who has built her own life and therefore has a self-confidence that allows her to put up with the infuriatingly juvenile and presumptuous attitude of the men. Her patience faced with insulting treatment was not as hard a sell a century ago when Candida was Shaw’s dream woman of independence, at a time when the idea was just beginning to take hold in a sexist society. But Hodos manages to make it all credible in 2016 when most women in the audience would slapped these two upside the head.

Ballard’s role is thinly written and his music is especially difficult, but he’s a pro and he gamely invests a fine voice that initially is filled with quiet stable pride in being “a good man” and then with the anxiety at the possibility of losing the woman he genuinely worships.

Speaking of worship, Vandepas has the toughest role to pull off for a 21st Century actor and audience. Victorian and post-Victorian audiences were familiar with a stock theater caricature called an aesthete, a young artist type not only disconnected from the real world, but contemptuous of its status quo mores – a strange bird whose aggressively maintained naiveté grates on modern sensibilities.

Vandepas bravely dives deep into that weirdness. He has shown an amazing range in recent seasons, especially for troubled off-beat personas, from his work at Ground Up & Rising (9 Circles and Dying City) to Slow Burn Theatre Company (Spelling Bee, Dogfight and Bonnie & Clyde).  While he has sung in many of these shows, this is the first time that his clear lyrical tenor gets a chance to soar.

The ever dependable Shane Tanner portrays the hapless assistant curate and Leah Sessa is a proper secretary a bit daffy for Morrell.

One fascinating aspect is aural. Because GableStage’s stage and auditorium are so shallow, there is no need for microphones for the actors nor the orchestra barely hidden behind a window on the set. So what you hear is pure unamplified sound. After decades of hearing voices pumped through those little mike buds in a wig or taped alongside a chin, and after hearing bands so heavily miked that they could be and may be in another room, after all that, the experience was a bit unsettling at first, and then a truly welcome change.

As always, the creative and technical team are flawless, notably Ellis Tillman’s gorgeous violet-lavender-plum outfit for Hodos and the period-perfect poet’s outfit for Vandepas including a dazzling flower brocade vest.

The elegant office/drawing room was designed by Lyle Baskin and Alsford leads a fine band including Victoria Stepanenko on violin , Elena Amilae on cello and Gary Gottfried on reeds.

In the end, it’s a real mixed bag that not only won’t satisfy some folks, but will bore many. But if you choose to open your mind and your heart, you can be entertained and intrigued by the spinning emotional pageant.

Side note: A tip to audience members talking about the play: It’s pronounced CAN-deh-duh, not Can-DEE-duh. The former is by Shaw, the latter is by Tony Orlando and Dawn. 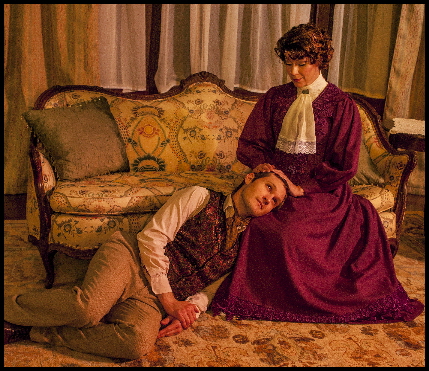