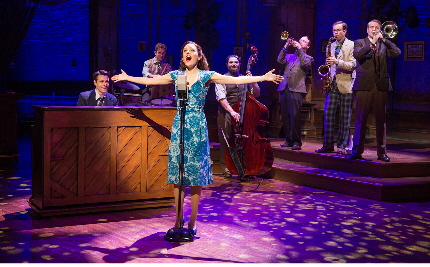 We’re back from our trip to New York to scout out productions you might want to see (or not), shows that might tour South Florida and scripts that might be worth reviving in our regional theaters.  Other shows—all nominated for Tony Awards on June 11 – that we have reviewed recently or will review in the next few weeks are War Paint, Oslo, Indecent, Groundhog Day, The Play That Goes Wrong, Six Degree of Separation and Natasha, Pierre and the Great Comet of 1812. Just search for “Report From New York.”

What is easily forgotten by succeeding generations and only occasionally memorialized in pop culture is how veterans returning from World War II battled emotional and physical traumas similar to the ones better publicized after World War I and the Vietnam War.

Maybe it was the generation’s reluctance to complain as the middle-class prosperity of the American Dream came true for them. But other than the Oscar-winning The Best Years of Our Lives, few works addressed the challenges facing damaged survivors in the late 1940s

But post-Desert Storm, when acknowledging a soldier’s service had become honorable again (remember how vets were treated coming back from Vietnam), these issues have

Badly hampered by a title echoing plotless revues of Greatest Generation standards, Bandstand is actually a story-driven show gifted with a driving and heartfelt original score echoing the end of the Swing Era and featuring propulsive dance routines.

It’s not a groundbreaking musical at the Bernard B. Jacobs Theatre despite its subject matter; the straightforward plot has all the expected clichés.  A sextet of musicians, disturbed heroes who can’t fit in back home, struggle to reclaim their lives, their self-respect and a paycheck by forming a band touting their unique status as veterans. One becomes enamored of a widowed heroine hoping that love will find her again.

The darkness and doubt haunting their lives – one vet liberated a concentration camp, others suffered through nightmarish violence — provide a thoughtful underpinning for the show’s primary draws, the period music and dance.

The tone resonates in the opening number as our recently discharged hero Donny Novitski (the standout Corey Cott of Newsies) is trying in vain to get a job during a production number that sounds like a public victory celebration with the titular lyric “Just Like It Was Before” — because, of course, it’s not.

But Donny takes control of his destiny, by assembling similarly under-employed musicians to form a band that will compete in a national talent search. It’s a diverse group echoing those 1940s films with one Jew, one Catholic, one wiseacre, etc. Donny also is wrestling with conflicting feelings for Julia Trojan (the radiant Laura Osnes), the widow of his best friend who he saw die. Julia, as it turns out, is a world-class vocalist to front Donny’s band, which specializes in swing jazz in its final burst of glory.

The locally successful band enters the competition that could shoot them to fame and fortune. But the lyrics and script by Rob Taylor and Richard Oberacker take an honorable turn in the final scenes that underscores intellectual honesty in what could have been just a barely disguised jukebox revue. More than a few throats in the audience close up and tears flow.

The sun-bright music by Oberacker (whose droll bio says he has written many musicals you’ve never heard of) is period perfect nirvana echoing Ellington and Goodman, much of it played live onstage by the cast including Alex Bender, Joe Carroll, Brandon J. Ellis, James Nathan Hopkins and Geoff Packard. Oberacker was not nominated for a Tony, but the orchestrators were.

Director Andy Blankenbuehler, late of Hamilton, insists that this cast deliver the emotional content with absolute truthfulness no matter the surfeit of standard issue plot turns. His Tony-nominated choreography looks and feels as if the audience is sitting in a club circa 1947, but Blankenbuehler has melded that aesthetic with Broadway tropes.

Cott has the brooding good looks of Montgomery Clift and charisma of Harry Connick, but his real skill is how he parlays a full fine voice. Osnes, a former Cinderella and Bonnie Parker, has a sweet strong voice that alternately radiates joy and melancholy. Beth Leavel, the original Drowsy Chaperone, is wasted in the tertiary role of Julia’s mother.

This one will certainly visit South Florida in a national tour and will likely get picked up later by the Maltz Jupiter Theatre or Actors Playhouse So don’t be put off by the generic title. It’s worth a whirl on the dance floor.