Report From New York: Just Closed ‘The Nap’ And ‘Inner Voices’ Worth A Local Look 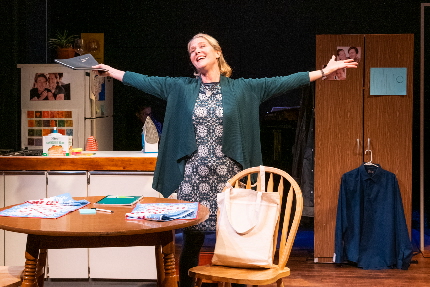 There is no message to divine in The Nap. There is no sociological analysis. The only memorably quotable dialogue are malapropisms.

But like The Play That Goes Wrong a few streets over, the Brits gifted us with yet another hilarious farce. This one by Richard Bean (One Man, Two Guv’nors) does have satirical overtones about greed and gullibility, and roots much of its humor in the flaws and peculiarities of a rogue’s gallery of demented characters.

Unfortunately, the show closed at Manhattan Theatre Club before we could publish this review, but The Nap would be a hoot for regional theaters in South Florida to consider once one major technical challenge is solved – which would not be too difficult.
The Nap refers not to a short sleep (the title being a courageous risk of critics’ poor humor), but to the soft green surface of a British billiards table where some crucial plot developments are set.

Because the central thrust of the show is how Sheffield working-class hero Dylan Spokes is pursuing his dream of becoming a billiards champion, helped and hindered by a bizarre group of characters including his useless ex-con father, a floozy barfly of a mother, a manager addicted to pub trivia, a wealthy transgendered patron with dark connections, a police detective who looks like Kiera Knightly, an East Indian government regulator in a button-down three-piece suit — misfits all.

Between practice sessions that occur before us, Dylan is struggling to keep his integrity as friends, relatives and others are trying to entice him to throw one of the preliminary rounds in order to make a killing with the bookies.

Dylan (Ben Schnetzer) and a few of the bizarre characters are far more intelligent and self-actualized than we unfairly stereotype blue-collar denizens. He can quote literature in passing while speaking of snooker. Others are delightfully dim-witted.

But Bean is more interested in creating a colliding set of crazies with waves and waves of character-based humor layered over with a hundred witticisms, bon mots and richly ribald punch lines.

Several are simply observations such as the game “is like golf except you can’t lose the ball” or “It was like a f**king religion to him – like Christianity” or the transgender queen’s hilarious malapropisms such as “I have hope. I am nothing if not an optometrist.” Dylan says of the cop, “She’s just a friend,” to which someone answers, “Friends are dangerous. Look what happened to Jesus.”

Bean has carefully constructed the actual narrative including a major reveal that you will not see coming because Bean and director Daniel Sullivan had the New York audience involved – even though the pace seemed to sag occasionally.

The highlight – and the challenge in staging subsequent productions – is that Dylan actually plays two championship games in front of the audience. The actor playing Dylan must pick up some decent skills before rehearsal. But the games could satisfy the plot needs because the other player/actor (both in England and here) have been world champion billiards players who could surreptitiously set up Dylan’s successful shots. (There are alternate scenarios if the actor playing Dylan misses a shot). The solution for regional theaters was hinted at; the live matches on Broadway were televised on a screen above the set. So those matches could be filmed in advance until everyone gets it right

The most memorable character is Waxy Bush (told you the show was ribald), played by Alexandra Billings who appeared on TV’s Transparent. She only appears a third of the way into the evening, but her riff on an acerbic Elaine Stritch persona (noticeably minus the intelligence) is a stitch.

For six years, veteran champion of independent musicals Paulette Haupt and her Premieres company has commissioned a trilogy of half-hour musicals and produced them every two years in a series called Inner Voices.

They are written by well-known playwrights and composers like Nilo Cruz and Michael John LaChuisa and by talents known in New York but not well known elsewhere like Cheri Steinkellner and Georgia Stitt. Usually, they star only one performer, almost always top-notch but lesser known names like Jennifer Damiano (Next To Normal), Hunter Foster, Barbara Walsh, Heidi Blickenstaff, Phoebe Strole, Nancy Anderson and Victoria Clark (Light in the Piazza).

The most recent edition, which just closed at the Barrow Street theater complex, centered on stories about “family, loneliness and love.” What made each of these distinctly different pieces fascinating was the style they shared. There were no verse-and-chorus songs per se; they were sung-through musical monologues that slipped into different sections as emotions, observations and plot points changed. You did not go out humming anything or recalling specific lyrics. Each was a river of musical drama or comedy or dramedy. The orchestra in each was a piano, one piece adding in a vibraphone, another a violin, another a cello.

The best was Scaffolding, written by Jeff Blumenkrantz, a popular and talented second banana in a dozen Broadway shows who also wrote the Urban Cowboy musical that tried out at the Coconut Grove Playhouse. Directed by the aforementioned Ms. Clark, it starred the beloved Broadway star Rebecca Luker (The Secret Garden, The Sound of Music, The Music Man, etc.). Luker has one of those sopranos that critics deem golden, silver, platinum or some other precious metal. But what elevates her voice here and elsewhere is the actress’ expressiveness that she imbues effortlessly in every bar of music and lyrics.

Scaffolding tells of a beamingly proud single mother who has withheld from her brilliant son that he is on the Asperger’s spectrum for fear it will keep him from getting into MIT. She has labored hard to help him adjust without embarrassing him or hampering him with that knowledge. When he finds out, their lives change.

Interesting, if a bit belabored, was The Costume by Daniel Zaitchik, about 10-year-old Leo stuck at home on Halloween in 1954 because his mother is chronically ill and his father is AWOL. A neighbor has asked him to care for a wounded pigeon that has been shot with a gun. The most notable aspect is the moving tender performance by the young Finn Douglas who manages to keep the audience involved for the half-hour.

The first piece in the evening was Window Treatment, composed by Daniel Green and written by Florida favorite Deborah Zoe Laufer. Broadway vet Farah Alvin is a lonely doctor coming home to her New York City apartment and immediately peering out her window across a courtyard (at us) for signs for her dream man. Dream is the right word because this visual stalking is about as close as she has dared risk her emotional involvement. But he is late tonight and she speaks to him as if berating an errant husband. Thanks to Laufer, Alvin is alternately hilarious and poignant and back again. It is a sad, sad tale of loneliness, but the points are made early and often, and often, and often.