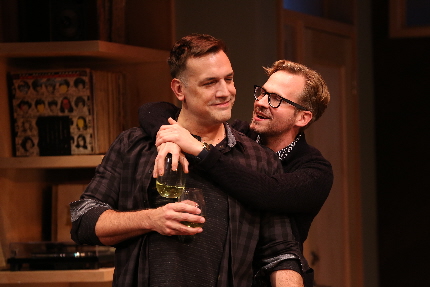 When a script is as strong as Michael McKeever’s Carbonell-winning Daniel’s Husband and begins to develop legs beyond its local premiere, one pleasure seeing it produced elsewhere is noticing how different editions such as a new one at the Westside Theatre bring their own vibe to the same work.

South Florida theater fans know this tale of a deeply loving gay couple whose unsettled conflict over whether to get married will turn into a nightmare. Initially whipsmart funny and later heart-wrenching, it depicts how one partner becomes incapacitated and his partner discovers he has none of the rights of a legally-recognized spouse.

This production is a return of an Off-Broadway production first mounted in the spring of 2017 by Primary Stages with the same director Joe Brancato and the same sextet of performers.

With one exception, the production isn’t better than the acclaimed 2015 bow from Island City Stage at Empire Stage, it just carries a different vibe – deeper, more trenchant. Cast with older actors, this version carries a sadder but wiser sense of gay men chastened through more life experiences.

Besides a staged reading through Jan McArt’s program, the Island City Stage troupe only had perhaps three weeks’ rehearsal and a few weekend’s performance (although the production was moved later to another venue). Some of the actors had worked together before.

This cast had a longer rehearsal, played the show previously for a longer run last year and is in the middle of a longer run now. The result is an easy, palpable chemistry among the friends and a smooth comfort with the material.

This rendition seems more about the topicality of gay marriage, marriage in general and spousal health provider rights. The Island City production was about all that, plus troubled childhoods and baggage-laden parental relations.

But we wrote at the time that the Island City production directed by Andy Rogow was “an indelible and inarguable exhibit that love between human beings is unquantifiably precious and inarguably valid — regardless of sexuality… that love must be valued by all humanity as being worthy of not simply societal recognition, but honor and veneration.”

Certainly that is evident in Brancato’s production, especially in Matthew Montelongo’s ripped-from-the-marrow performance as the partner agonizing over his impotent efforts not just to cure him, but to even be given the right to care for him. But that element seems not as strong as it was in the Wilton Manors outing.

If you haven’t seen it, here’s the journey. The play opens on a dinner party thrown by Mitchell (Montelongo), a quick-witted articulate writer of gay-centric works, and his partner of seven years, Daniel (Ryan Spahn), a successful architect, amateur gourmet cook and vinyl record enthusiast. They are hosting their old friend Barry (Lou Liberatore), who is Mitchell’s agent. Filling out the quartet is Barry’s latest in a long line of short-term relationships, Trip (Leland Wheeler), an earnest and amiable home health caregiver who is 20-plus years younger than Barry and in a bit in awe of this trio.

During the evening, Daniel bemoans the imminent week-long visit of his widowed mother Lydia (Anna Holbrook) who lives alone with a large bank account in an empty house and an emptier life. Later, when Lydia actually arrives, she seems cheery, supportive of the relationship of “her two boys,” but she has a bent for saying something judgmental and damaging without consciously meaning to.

During a later argument with Mitchell, Daniel suffers a complicated form of a stroke that leaves him fully functional mentally but unable to move a muscle. Lydia, who was a cold mother, sees a way to give her life meaning and make up for her past sins by claiming a blood relative’s right to take Daniel home with her. Mitchell obviously opposes her, but has no legal standing because they did not get married and postponed signing drawn-up documents making each other their surrogate health care decision maker. The plot continues from there through a painfully logical and tragic arc.

All of the actors are first-rate, especially handling McKeever’s rapid-fire repartee in the early scenes that makes the audience want to go out for a beer with these folks. Besides the broad-shouldered Montelongo, Wheeler is especially memorable by exuding a genuine fascination as he takes in the older men describing what it has been like being gay in this society over the past two decades, and then later as a truly compassionate caregiver.

But Brancato’s one arguable decision is in molding Holbrook’s presentation of the mother. At one point, the character says, “I am not the villain in this. There are no villains here.” But the play needs a strong antagonist to drive the second half. This Lydia is not lovable and remains flawed, but she isn’t the coldly certain and unshakeable opponent that Laura Turnbull and Barbara Bradshaw created in Florida. That undercuts the hopelessness of Mitchell’s cause.

McKeever has updated the 90-minute script a little without making it obvious, but there are references to Instagram, Twitter and Grindr as well as a discussion of who would the parties like have sex with more:  CNN’s Anderson Cooper or Don Lemon.

(Full disclosure: McKeever and I are among the co-hosts on the weekly program on BECON-TV Spotlight on the Arts.)

Daniel’s Husband is scheduled to run through Feb. 3 at the Westside Theatre (upstairs) at 407 West 43rd Street, New York City. For more information, go to http://danielshusband.com/#home

One Response to Report From New York: New Daniel’s Husband Gets New Vibe