MNM’s Grease Struts Its Stuff When The Music Starts 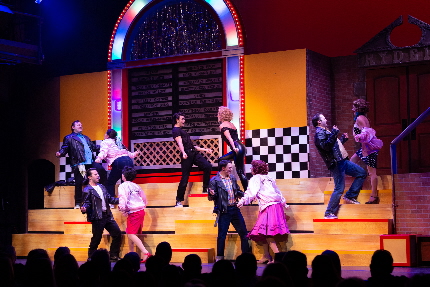 If you hire strong voices as they did in MNM Theatre Company’s production, the venerable musical Grease cannot help but be entertaining with its elbow-nudging pastiche of faux late ‘50s-early ‘60s rock n’ roll.

The challenge in which MNM doesn’t prevail is finding the difficult to locate tone for the script scenes because Grease is not simply a straight ahead comedy as it’s played here. It’s a knowing spoof in which actors are lovingly making fun of the period’s conventions without winking directly at the audience.

This explains why the audience isn’t bothered by the fact that traditionally the performers obviously haven’t seen the inside of a high school in ten years.

So the good news is that director Bruce Linser, music director Paul Reekie and especially choreographer Emily Tarallo have mounted joyous rousing production numbers, corner do-wop tunes and charmingly crooned ballads. The less welcome news is that the script (written in 1971-1972 and much, much raunchier than the 1978 film) doesn’t land convincingly. You put up with the book scenes while waiting for the songs.

Which is too bad because the script by Jim Jacobs and Warren Casey (also responsible for the most of the current score) is indeed quite funny in a gentle but decidedly R-rated way. It pokes fun that the Connie Francis-Sandra Dee-Annette Funicello depiction of adolescence on film and AM radio in the early 1960s did not acknowledge the misery of high school cliques, the indulgence of drinking and smoking behind parents’ backs, and above all, how raging hormones and sex drenched every waking moment, thought and conversation. That works in some productions because the audience of Boomers and their parents recognize the musical theater version of their youth.

If you need to know the plot, you’ve been living in Tibet the past 47 years. But a quick aside, the musical ends with the upbeat anthem “We’ll always be together,” a bit sardonic since we know they won’t be.

The strength of this production besides Reekie’s band and Tarallo’s inventive riffs on 1950s dance tropes, are the singers. Most of the cast gets to shine in solo spots with their colleagues.

Jonah Robinson (late of Zoetic Stage’s Fun Home) is a sexy pompadoured-Danny Zuko pining in “Sandy” and easily slips into the choral numbers. Caiti Marlowe as the virginal object of his affection nails “Hopelessly Devoted To You.” The best acting comes from Laura Plyer (arguably the best facet of the Wick’s Singin’ in the Rain as Lina Lamont and memorable in MNM’s My Way) as the acerbic Rizzo in “Look At Me, I’m Sandra Dee” and “There Are Worse Things I Can Do.”

But the entire group of Pink Ladies and T-Birds are just as good when they get their moment in the spotlight: Cara Harpest as Jan, Meredith Pughe as Marty, Ashley Rubin as the hapless Frenchy, Alexandra Amadeo Froist as the goody-two shoes Patty, Brian Reiff as Sonny, Israel Vinas as Kenickie, Trevor Wayne as Doody, Jesse Veliz as the nerd Eugene, Janna Morrison as Miss Lynch, and Cameron Jordan who keeps adding to a growing roster of noticeable characters as Roger.

Special honors to Jim Ballard as the DJ Vince Fontaine who spends about 15 minutes in a pre-show platter spinning. But Ballard, the most experienced hand on stage, stops the show with his Elvis-like incarnation as the Teen Angel in “Beauty School Dropout” number.

The effervescent Tarallo, who cannot help but stand out in any dance ensemble blessed with her presence, not only provides the fine choreography but doubles as the uber-sexy Cha-Cha.

A look at the playbill shows that MNM has hired a talented creative and tech staff twice as large as the cast. But deserving mention is Nat Rayman and David Nail’s set design, which includes gymnasium bleachers instead of risers and a 2 ½-story tall jukebox bearing the names of all of the songs in the show.

As a showcase for music, the work is unshakeable, produced around the world, cruise ships and a bowdlerized version for real high schools – all of them enhanced over the years with ever more songs including hits from the film “Hopelessly Devoted To You (written by Olivia Newton-John’s buddy John Farrar), “You’re The One That I Want” and the title tune written by the BeeGees.

And yet, this season-closing production is so charming that you need to stay in your seat after the bows. At the encores, the cast has the audience out of their seat, bopping and hopping and singing along.

Grease plays through Dec. 2 at the Rinker Playhouse at the Kravis Center for the Performing Arts in West Palm Beach. Performances 7:30 p.m. Thursday-Saturday, 1:30 p.m. Saturday and Sunday. Running time 2 hours 10 minutes including one intermission. Tickets $55-65. Visit www.kravis.org or call (561) 832-7469.

If you couldn't get a seat for tonight's preview at Raymond F. Kravis Center for the Performing Arts….. here's a digital sample. Get your tickets now, we are almost SOLD OUT for the run!www.kravis.org