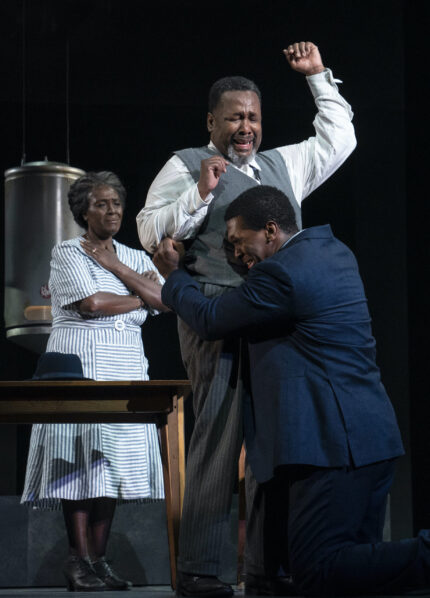 Truthfully, there are few American plays of such depth and quality that they can be constantly revived and successfully reinterpreted as you can with a timeless classic like Hamlet.

But the new Broadway revival of Arthur Miller’s masterpiece proves that Death of a Salesman qualifies. This critic has seen multiple live productions including triumphs starring Dustin Hoffman and Brian Dennehy, plus others in regional productions, plus versions available on film such as the standard-setter with Lee J. Cobb.

No approach was “better” than the others; each came at it from just enough of a different place that the familiar seemed fresh.

Welcome the newest – iteration is the wrong word – edition that emanates an unique artistic vibe, and not simply because for the first time on Broadway the Loman family is African-American. Racial overtones inarguably add an extra topspin on the socio-economic setting in which a black family is struggling to stay afloat in 1949, but the challenges Miller poses are underscored as tragically universally transcending race.

Indeed, race is never mentioned or even alluded to directly. And yet it’s impossible to miss the overlay imbued throughout. Watching Willy struggling against the demeaning forces around him, it is impossible to ignore that his plight is triply exacerbated by the fact that his soulless young boss – standing in for the corporate culture as a whole — is white. For instance, when Willy loses his temper at being snubbed — his life and service disrespected – but he realizes he has crossed a line in the hierarchy, we watch him suddenly back off with more speed and humiliating subservience than he would if he was trying to recover his footing with a black supervisor.

Yet this Willy is like the others in the canon: someone who has invested heart and soul, especially soul, into the fraudulent myth of the American Dream – that hard work and charm are guarantees of success.

This production stars a personal favorite actor of ours, Wendell Pierce, in a simply superb Olivier-winning performance. Directed by Miranda Cromwell, he and the entire evening exude a brand of angst that spills over into brief but intense spasms of agony.

Cromwell (who co-directed this alongside Marianne Elliott for the West End and Young Vic productions) keeps the three-hour ten-minute journey moving solidly although it might benefit from a little more electricity throughout this almost elegiac evening.

But the tragedy is all the more painful because we cannot escape knowing what is going to happen, unlike many of our grandparents who saw it in 1949 and were able to refuse to admit the inevitable until the finale.

Pierce, an experienced stage actor best known for TV’s The Wire and Treme, creates a deteriorating Willy desperately aware that his dreams are disintegrating and somewhere deep inside barely cognizant that he has invested his faith and belief in a false promise. There’s an echo of the elemental repudiation that Wall Street financiers were forced to face when the stock market plummeted in 1929, leading to so many suicides.

Linda is played with uncharacteristic strength by Sharon D. Clarke (best known for the revival of Caroline, Or Change). Her Linda’s unshakeable devotion is knowingly in heroic spite of a clear-eyed comprehension of Willy’s faults and failings.

Equally impressive are Khris Davis (of The Royale) as Biff and McKinley Belcher III as Hap. Davis makes Biff’s early adoration of Willy so complete that we – who know their secret from previous productions – perfectly understand the depth of betrayal he struggles with through most of the play. Belcher keeps Hap from being a second-tier character as often happens, especially his reactions to being sloughed off by Willy when he reaches out repeatedly in vain for his father’s acknowledgment.

In the casting department, much has and will be made that the beloved André De Shields (fresh off Hadestown’s Hermes) is playing the spectral Uncle Ben. Frankly, De Shields’ irrepressible aura as a musical theater creature feels badly out of place, as if this was the producer’s attempt at publicity-oriented stunt casting. You can argue that Willy might fantasize about Ben, but not like this. Clad in a white three-piece suit, watch-chain across the vest, spangled shoes and sporting a white cane with a jeweled top, you expect the liquid De Shields to slip into a tap routine at any moment – something out of place in this work.

The visual design by Anna Fleischle with Jen Schriever’s lighting creates a surrealistic array of empty doors and window frames plus assorted pieces of furniture (including the infamous water heater), all of it hanging from the flies and dropping into a background of black flats and risers. Few if any previous set designs have been realistic. Certainly, Miller cited something in his original script about Willy entering in the skeletal outline resembling a brain. This one places the entire production inside Willy’s mind complemented with period music and strange camera flashes as if he is trying to preserve moments in a photo album.

A closing date of Jan. 15 has been announced; so this is a fine production to see as soon as you can.

(Note: This takes place in Hudson Theatre, one of Times Square’s oldest at 120 years, which became a television studio, movie house, nightclub and event space for the adjacent hotel. It was massively renovated to its former glory and reopened as a theater in 2017.  One major improvement was the addition of seats that are both wider and have more legroom than nearly any venerable venue on Broadway.)

To read our review of Almost Famous, click here.

This entry was posted in Performances, Reviews and tagged Death of a Salesman, Miranda Cromwell, Sharon D. Clarke, Wendell Pierce. Bookmark the permalink.