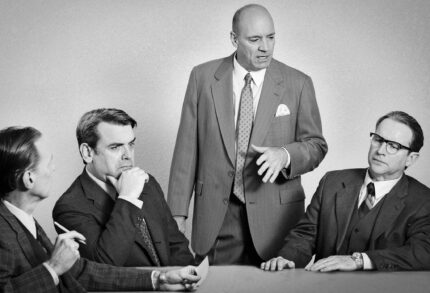 Serving on a jury is a rare and precious opportunity for everyday people to take some charge over the justice that is elusive in most other parts of our lives, what David Mamet and Jay Presson Allen wrote in the film The Verdict is something akin to a kind of prayer.

That is a partial explanation for why Reginald Rose’s 12 Angry Men has struck some subterranean chord in Americans for 68 years now as a film, a live television play and a stage play mounted over and over by professional companies, community theaters and high schools including revised as 12 Angry Women and 12 Angry Men: The Musical.

And now, Palm Beach Dramaworks has begun rehearsals for a production opening Dec. 9.

Granting that many people balk when they get a jury summons, “Instead of saying, ‘Oh, I dread this’ or ‘I don’t want to do it,’ shouldn’t we otherwise be willing to say, yes, we will, so that I can be my voice and my responsibility is a part of the solution?” offered Dramaworks resident director J. Barry Lewis.

But as stage theater, this tense, taut tale of a jury debating a murder case is especially a perfect fit as a study of 12 divergent personalities of people from all walks of life struggling in the kind of group dynamic that can be a bedrock of great drama.

Tom Wahl, who plays the linchpin holdout Juror 8, said theater is “all about storytelling. This is just fantastic storytelling. It doesn’t get better than this: Twelve people come into a room and they all have to agree on something.”

Indeed, since a majority of audiences have seen a version – not the least of which is the brilliant 1957 film starring Henry Fonda – the denouement itself is likely well-known.

But what this production is aiming for is “not so much about the resolution; it is about the journey of that,” Lewis said. While the play certainly underscores the mechanics of jurisprudence, “I think we’re more interested in the side that deals with the interpersonal communications and human behavior that emerges from putting twelve unknown people unrelated to each other in a space and trying to come to a decision. Now, that is universal.”

While this production remains set in the 1950s, Rose’s work echoes the current zeitgeist of how different people bring different backgrounds to their decision-making and their seeing the same situations differently. “Whether it’s emotional, whether it’s logical, whether it’s based on absolutely what we consider to be black and white, the next person sees it as gray and white,” Lewis said.

Wahl said the challenge in the part “would have to be that this guy is standing alone against the world of this room, and that in itself would be daunting. As an actor approaching that part is how to (not) come off as I’m the savior, I’m the right one, I’m the voice of reason because it’s not that at all. I’m just a regular guy and he is always looking for the truth, and he’s not trying to convince anyone of anything, he’s not trying to sway anyone to his way of thinking. He doesn’t say the kid is innocent of the crime. He just doesn’t know.”

In fact, the play never contends that the defendant is innocent, only that there is reasonable doubt.

Wahl played the mild bank clerk Juror 2 in a Rochester church basement “sometime in the ’80s,”  although he doesn’t recall much except some of the jurors were women.

Wahl and Lewis both have sat in a real jury box, although a plea-bargain ended Lewis’ case three days into testimony and Wahl was in the penalty phase of a civil age-discrimination case.

That reinforces the public service reminder for Lewis.

“Even in the 1950s, and even now, what is your response when you get that you have to show up for jury… what is your first response to that?… The majority of us say, ‘Oh, my God, how do I get out of this? It’s going to break into my routine. I’ve got things to do. I can’t do this’.”

“But we forget that the intention originally was always to say it is not only a duty, but it is also an honor to be able to serve, in the sense of this is our nation. This is the way justice is being determined. … It is such a cornerstone in our entire democracy.”