Report From New York: Violet Shines From Foster’s Glow, But Show Itself Is A Bit Dimmer 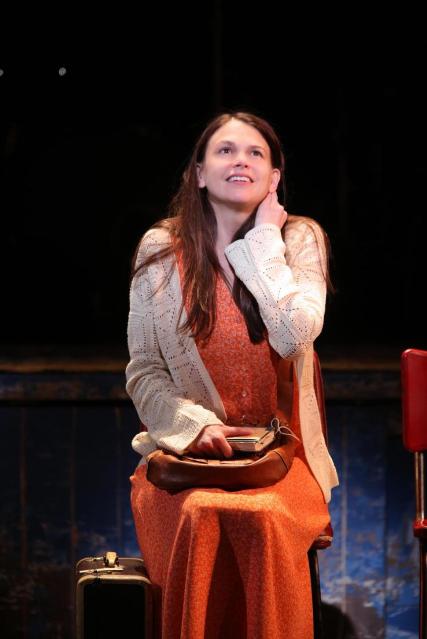 See the list of previously reviewed shows at the bottom of the story, including The Bridges of Madison County, Mothers and Sons, and All The Way. Other reviews are coming of Heathers the Musical and Satchmo at the Waldorf.

Programming note: We’ll be Facebook posting live at Florida Theater On Stage and tweeting at @fltheateronsta #tonys bill during the Tony Awards. Join us in the conversation about 7:45 p.m. June 8.

It’s not difficult to understand why so many people are pulling for the revival of the musical Violet.

Its prayer for the world to see beyond the surface speaks to the ugly duckling inside all of us, speaks to the belief that we all have something beautiful or worthwhile to offer that may not be fully recognized by those around us.

And, of course, it has Sutton Foster who has jettisoned her wacky, kinetic personas from The Drowsy Chaperone, Thoroughly Modern Millie, Shrek, Young Frankenstein and Anything Goes. This time she has let her winsome, wistfulness – always peeking through those aforementioned roles – shine clear and bright in a winning performance that exudes a prickly wariness and unvarnished hope.

Winning is an apropos word because she is nominated for a best actress Tony Award, along with the show as best revival, the director Leigh Silverman and supporting actor Joshua Henry.

But the show has an almost cult-like reputation, certainly in South Florida in the wake of the little-seen but widely praised 2001 production at Actors Playhouse production, which won five Carbonell Awards including one for star Jennifer Hughes.

Having missed that, I eagerly looked forward to a full production in NYC. Sadly, perhaps my expectations were too high. Foster is indeed absolutely solid, as is Brian Crawley’s book and lyrics, Silverman’s direction, and especially Jeanine Tesori’s score, which predated Millie, Shrek and Caroline Or Change (not to mention her terrific Fun Home this past season Off-Broadway).

But something is missing that makes this a fully-satisfying production. It seems inconceivable that it might be “heart,” which would seem to be the strongest suit of a show like this, especially with the unassailably appealing Foster at its core. The bottom line is that there were few moments when you choked up and teared up.

The story seems made for such reactions: A 25-year-old woman from the North Carolina backwoods was disfigured as a little girl when her father’s axe handle flew off and badly gashed her face. (We never see the actual scar.) She grew up as an oddity in her community in the 1950s, harboring deep emotional pain inside a perky, even defiant exterior. After her father dies, she sees a faith healer on television and, being religious, decides to take a bus trip to Tulsa to have him heal her face.

It is 1964 and she hooks up with two soldiers en route to the west coast and a possible posting to Vietnam. One is a handsome white womanizer full of himself (played when we saw it by understudy Austin Leach) and a sturdy black sergeant (played by the warm-voiced Henry).

During the bus ride, we see flashbacks of Violet’s life, her relationship with her father and her faulty attempts to cope with her appearance. Romantic stirrings, of sorts, occur among the three travelers, complicating matters considerably. All the characters here, even the minor ones, are maimed and limping inside in one way or another.

Finally, Violet meets the televangelist face to face and (predictable spoiler alert) not only discovers that she should not look at the man behind the curtain, Dorothy, but finds the beauty and worth inside herself.

There are a couple of difficult, even false notes here. One is overt racism toward the black sergeant seems pretty tame for the Deep South of the 1960s.  The other is that Violet, who has developed an armadillo’s shell and a victim’s acquired pragmatism is so willing to believe that a charlatan of a faith healer could help her. It’s logical, of course, but not credible.

The score and lyrics are an eclectic mix of folk ballads, honky tonk, Delta blues, gospel and pure country & western. But they are most effective when they capture the yearnings inside all the characters. To boost the running time and have a change of pace, the show injects upbeat tunes including a grossly superfluous and way, way too long gospel number once Violet reaches the preacher’s television studio.

But the compassionate and tender aura that this show is reputed to have is AWOL. Perhaps it’s that this was designed in 1997 as an Off-Broadway show and its strengths are dissipated in a big Broadway house like the American Airlines Theatre.

Other than resources, it’s not the staging. Silverman mounted it last July  as part of the Encores series of one-night-only staged concert productions in New York City. Oddly, this production under the aegis of the Roundabout Theatre Company retains the limitation of that edition. Most of the show is delivered with people standing, dancing and warbling in a single plane spread across the stage. Even though there’s plenty of movement, it feels quite static.

And while everyone on stage is giving their all – including the band at the back – the energy and sentiment just don’t comes across the footlights to the center of the auditorium.

Again, this is not a badly-made production and a better-than-average theater-going evening, if only to see Foster prove that she has acting chops that had not been previously tapped.

To see many photos and videos, visit: (Bottom of page) click here


To read our other reviews of New York shows: