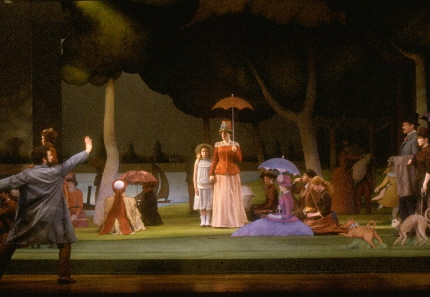 Putting it Together (How Sondheim and I Created Sunday in the Park With George), by James Lapine, Farrar, Straus and Giroux, 390 pages, $40.

It’s an oft-repeated truism that in theater, film and even a novel, it is almost impossible to accurately depict the guts of the creative process, let alone make its intricacies interesting.

But director-librettist James Lapine has not only conquered that task, he and 40 colleagues whom he interviewed have produced one of the most compelling and detailed inside examinations of the full process of the creation of a piece of theater, covering everything from word choice in a lyric to choosing the theater venue.

Putting it Together tracks the legendary musical Sunday in the Park With George’s conception in 1982 to it winning the Pulitzer Prize in 1985. While the work ostensibly focuses on French impressionist Georges Seurat and his masterpiece “Un dimanche après-midi à l’Île de la Grande Jatte,” the musical’s enduring resonance is its meta-paean to the pain and passion of creating Art.

Composer-lyricist Stephen Sondheim’s own two volumes of analysis of his entire body of work, Look I Made a Hat and Finishing the Hat, from 2010-2011 are superb in their own way. But Lapine’s volume published this week is equally as instructive in the wider array of nuts and bolts of artistic creativity, business savvy and compromise inherent in the work of any commercially successful piece of art. Instructive is a carefully chosen word; this book should be required reading for any student considering working in the uniquely collaborative endeavor of theater.

Full Disclosure:  This critic has been a confirmed Sondhead most of his entire adult life and while he loves Sweeney Todd, Company and other works, the one that has inspired his life has been Sunday. So, personally, Lapine’s use of this particular piece is just savory gravy on the steak. But its insights and lessons are equally applicable across theater and even art in general.

Lapine’s chronological book relates his own memories told first person, alternating with verbatim excerpts from interviews with 40 other people involved in the journey, beginning with an unreserved frank Sondheim and then the stars, supporting players, designers, producers, music staff, stage managers, down to the wife of star Mandy Patinkin. These are not standalone quotes; they are back and forth exchanges between Lapine and his colleagues. They reveal Rashomon-like conflicts in recollections, differences of opinion occurring at the time, the inner personalities of everyone instead of their public personas, and how the passage of 35 years has changed or reinforced their initial perceptions.

The book underscores the interior bubble of theater creation by skilled people who are more than willing to acknowledge that as a group, they are not the most emotionally stable or socially adept people. This book admits readily, almost luxuriates, in the miracle that theater artists bind together to produce what, on occasion, is transporting and transformative magic. I’m sure this phrase will occur in other reviews but, yes, it puts you in the room where it happens. But you are looking at it from the inside, not from the outside looking in.

Sunday was one of the first, possibly the first plot-driven musical to come to Broadway via the now-ubiquitous workshop path; A Chorus Line arose out of Bennett’s interviews not a story. Famously, the first workshop production at Playwrights Horizon had only the first act; many of the second act songs arrived sporadically during future rehearsal periods.

To begin the improbabilities, while Sondheim has always been considered the boundary-crossing edge of mainstream Broadway theater, he was still a child of the traditional paradigm. Lapine, a trained visual designer 20 years younger and unable to read music, came from a non-traditional off-Broadway background with zero experience in the sophisticated but hide-bound Broadway process. But Lapine was in awe of Sondheim, and Sondheim, ever looking to explore “something new,” was energized by his exposure to Lapine’s virginal status.

For instance, Sondheim was accustomed to writing songs based heavily on extensive conversations with the book writer and often began writing when the book was in some rough shape. But with Lapine, after agreeing that Seurat and his painting bore the seeds of something worth exploring, they were searching around for a central stream by examining a print of the painting, asking who the people were, how they knew each other. Then Lapine said, “The main character is missing.” Sondheim asked who and Lapine said, “The artist.” That was the breakthrough for both men to begin working in earnest somewhat simultaneously.

The book examines in simple terms the thought processes and work processes more clearly and concisely than most other books. Sondheim discusses how the collaborative process differed with librettists George Furth in Company than James Goldman in Follies than John Weidman in Assassins. Lapine, who said he learned an immense amount in how to direct during the process, discusses the intimate workings of dealing with actors and other artists of varying temperaments.

This is far from just a celebration of the cerebral and aesthetic. The business acumen and decisions that moved this highly unusual work to Broadway are examined with full honesty. For instance, the merging of art and commerce is no starker than when Manny Azenberg, a champion of Neil Simon’s work, was serving as producer and general manager for Sunday. So consider that Azenberg says in an interview that, no, he didn’t really like the show. But he adds, “Which is neither good nor bad. Producing it was an act of a strange kind of loyalty: we were doing the show because Sondheim wrote it and because the heard of the Shuberts said we’re doing it.”

Lapine does not flinch at limning how troubled the process was and how miraculous the final coalescing was. He spares himself nothing as a neophyte feeling his way around.

The last 100 pages of the book is the script – as if anyone reading this would need it – but the first 285 are laid out with a designer’s eye, lots of white space and copious illustrations including Sondheim’s handwritten notes. The sole problems are the body type is about two points too small and the few footnotes are microscopic.

Among the fascinating reveals are the personality differences. Lapine admits to Sondheim’s characterization of his outer demeanor as “diffident” – not a plus for someone who has to connect with artists. Patinkin, now considerably mellowed, acknowledges having been an intense difficult young artist driven by fear that he was going to be a failure because his most significant material to draw from didn’t get written until very late in the process. Musical director-conductor Paul Gemignani and orchestrator Michael Starobin, now good friends, did not completely get along or trust each other.

But details aside – how Sondheim constructs a song, how Lapine worked with actors – this volume celebrates the very acts of creation that the show itself venerates.

This entry was posted in Book Reviews, Reviews. Bookmark the permalink.