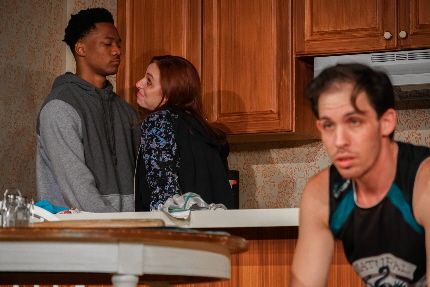 The ghosts of Eugene O’Neill and Sam Shepard creak the floorboards of Main Street Players’ Wolf & Badger, the latest exorcism of filial trauma from New Jersey playwright Michael John McGoldrick. Unfolding in 90 minutes of real time, MSP’s first production since the pandemic is a story of brotherly conflict as old as Cain and Abel as well as a contemporary portrait of late capitalism in decline, its ambitions as bold as its set is modest. It doesn’t always meet them, but the effort is never less than sincere and truth seeking.

The period is upstate New York in the wake of the 2008 recession. We meet half-brothers Landon (Brandon Hoffman) and Maddox (Joshua Lyons) in their childhood home, on a monumental night for both young men. Maddox, a fussbudget with a delicate constitution and a history of marijuana dependence, and who has long served as his broken family’s doormat, is set to join the Army the next day, a hard reality for which he seems ill prepared.

Landon, his older sibling from a different marriage, both resents and envies his brother’s impulsive attempt at self-transformation. He is stuck in a rut, having recently split from his wife, lost his plumbing business and taken to trafficking opioids to earn his pittance. Now here he is, not only losing his kin but with a new responsibility foisted upon him: He must now accept the role of caregiver for their ailing mother, who hangs on by a thread—and a regimen of IVs—in an unseen room in the house.

Landon is as unprepared for this domestic responsibility as Maddox is for the rigors of military training, but at least they have this night, and Landon has planned a rager to send his brother off in style. Except Maddox wants none of it, preferring a quiet evening at home playing cards, a hobby that has long allowed the siblings to decompress, and conjure happier times. But the harsh present, and the uncertain future, continue to invade their reveries. Old wounds reopen, and eventually a figure from Maddox’s past—ex-girlfriend Ainsley (Melissa Bibliowicz)—bursts through the door in a junkie dervish, with an illicit scheme that will further test everyone’s resolve. Two damaged souls become three, each exchanging barbs, miseries and shivs.

In a talkback following the world-premiere production’s opening night at Main Street Playhouse, McGoldrick explained that he wrote the play over 2015-2016 while grappling with the incipient rise of Trumpism in the heartland. Like many Americans in liberal bubbles, he read J.D. Vance’s Hillbilly Elegy as if it were the talisman to decode the cognitive dissonance of poor white folks betting their futures on a Dionysian plutocrat who announced his candidacy on a gilded escalator. Wolf & Badger deploys the benefit of hindsight to peek into the conditions of economic decline and cultural drift that would lead to this seismic disruption of the electorate. In Landon and Ainsley, maybe even in Maddox, we see future Trump voters.

Though revealing, McGoldrick’s script can also be reductively direct, burdened by transparent exposition and pop psychology. (“You’ll run away from the army like you run away from everything else.”) This sense of Cliffs Notes embedded into the text itself is never more obvious than the meaning behind the play’s name, a reference spelled out so explicitly it leaves little to the imagination. McGoldrick is on more effective ground when he hones in on the vivid details that build character, like Maddox’s remembrance of a better time, as a teenager weaned on “top 40 radio, Mountain Dew, mini donuts and cars … the best time of my life.”

All three actors meet the play’s demands head-on, with Hoffman and Bibliowicz acting as alpha aggressors to Maddox’s repressed beta. But it’s Lyons’ Maddox who is the revelation here. In his professional acting debut, the recent high school graduate cuts a tragic figure, portraying Maddox as a bundle of coiled nerves—the exterior personification of an interior agony.

The production’s problems arise primarily from tone. Director Danny Nieves sees even minor disagreements as clangorous conflicts, to the point that the sheer volume can feel smothering. There are only so many times we can watch actors’ appendages slam and bang into cheap furniture before we feel a bit anesthetized to it all. Because it has been preceded by so many detonations, the play’s explosive climax—which boasts genuinely impressive fight choreography—feels only like the latest display of emotional calisthenics in an endless torrent. Watching this Wolf & Badger is exhausting, and not always in the cleansing way in which it is intended.

It’s also worth noting the missed opportunity of rendering the mother character as a nonentity. McGoldrick intended this matriarch, a person vital to the brothers’ decision making, as a looming and powerful offstage presence. This is not successful here. We do not hear the cries from the other room, the occasional whir of medical machinery, the ring of a service bell or other staples of sound design that might have suggested a flesh-and-blood person; instead, she merely comes off as an occasional plot device and her absence a way to remove a character from the room.

Wolf & Badger is neither the first nor the last imperfect world premiere, in both source material and execution. But Main Street Players’ passionately performed take offers a vital blueprint for its potential. After some tweaks to the script here and there, and a general dialing down of its temperature, it could be well on its way to joining the pantheon of dysfunctional family sagas.

Wolf & Badger runs through Aug. 29 at Main Street Playhouse, 6766 Main St., Miami Lakes. Tickets are $30 general admission and $25 for students, seniors and military. The running time is 90 minutes with no intermission, and masks are optional. Visit mainstreetplayers.com.