Riverside’s Superb Hello, Dolly! Is As Resplendent As It Gets 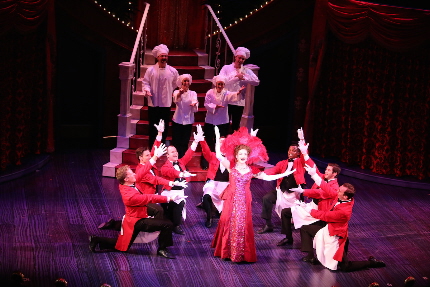 Michele Ragusa leads the boys in the title number of Hello, Dolly! at the Riverside Theatre

VERO BEACH — You don’t get any better, any more professional, any more resplendent than Riverside Theatre’s production of Hello, Dolly!

Directed and choreographed by James Brennan, this production is a dazzling bouquet of theater delights. Mr. Brennan takes Jerry Herman’s music and lyrics and Michael Stewart’s book and, with a clean vaudeville aesthetic, forges them into a show that is fresh and fun.

Indeed, it thrills from the outset when the painted old-timey drop curtain rises, revealing an ensemble of nouveaux boulevardiers and their ladies decked out in glorious costumes standing in front of another drop painted to look like 1890 New York City’s Central Park. Just as you catch your breath from the visual treat, in comes Broadway performer Michele Ragusa in her role of Dolly Gallagher Levi, the remarkable matchmaker with a business card for all seasons and reasons.

What a fantastic find in this performer. At once charming and witty, Ms. Ragusa can make you laugh with her exquisite understated humor, nudge a tear during her tender monologues with her dear departed husband, Ephraim, and scale any note you set in front of her as if she were taking a Sunday stroll. You’ll need a hanky in her effortless “Before the Parade Passes By.” Both feminine and funny, Ms. Ragusa employs some cagey but subtle rim-shot takes in this production, which is so appropriate considering the show’s highly presentational style. She talks to the audience, takes them into her confidence and even shares dinner with them in a very funny dinner scene. Truly, resistance to fall in love with Ms. Ragusa or her Dolly is quite futile.

The action moves quickly and efficiently about 15 miles north to Yonkers’ main attraction, Vandergelder’s Hay and Feed, designed with satisfying abundance by scenic designer Cliff Simon. The store’s owner, no nonsense Horace Vandergelder, is the object of Dolly’s intent; he doesn’t know yet that he will soon ask her to marry him. Broadway performer Adam Heller has great fun with Horace’s bluster and brings to it a droll humor. He also brings such affection to the role that you can’t help but fall for him, too.

Barely a moment passes when the talented male ensemble breaks into a full throttle, high jumping, beautifully sung “It Takes a Woman” in which dancers leap and flip and spring into every spot on that stage. It’s as if you’re watching a time-lapsed flower blossom and pop open.

Another moment and yet another treat that brings instant applause from a delighted audience — “Put on Your Sunday Clothes” during which the world’s happiest “choo-choo train” takes passengers from Yonkers down into New York City. The delight comes from, again, Mr. Simon’s no-holds-barred visuals.

From singing and dancing, to acting and comic timing, the entire cast is as good as you get…anywhere…no matter what latitude. The cast comprises professionals who, other than a couple talented and trained recent graduates of performing arts schools, have extensive credits on Broadway, off-Broadway or on national tours. The inventive and giddy “Dancing” number will set your heart flying as they waltz and bound as if on wings.

Ryan Breslin, who might be recognized by Broadway theater patrons for his work in The Book of Mormon and Newsies, is hysterical as Barnaby, a clerk at Vandergelder’s store. He shakes and stammers one moment then flies across the stage in graceful leaps the next. He’s also got some great comic timing which he uses very well in a slapstick scene where he and head clerk Cornelius try to hide in Irene Molloy’s Hat Shop. Opposite him is Alyssa Malgeri who charms as dizzy Minnie Fay, Irene Molloy’s hat shop helper.

Handsome Jeff Sears shows off his comic dexterity as Cornelius. We see him easily fall in love with Irene Molloy, portrayed tenderly by Jazmin Gorsline, a sweet-voiced soprano who beautifully sings “Ribbons Down My Back.”

That song, like “Before the Parade Passes By,” is a widow’s lament, if you will, about wanting to get back into the living. That theme appears twice in this show, which perhaps reveals something deep about Mr. Herman, the show’s legendary composer/lyricist. His mother, who was a big influence on Mr. Herman’s professional life, died at the age of 44. She had only seen one of his shows — the Off-Broadway revue “I Feel Wonderful” which used material he created while studying theater at the University of Miami. After her death, Mr. Herman reportedly went into a deep period of mourning. So it’s not surprising he used that recurring motif underscoring the show’s overarching theme which is to live life while you can.

While those deeper moments do touch, they fly by, making way for plenty of humor and pizzazz. “Elegance” turns into a comic gavotte in which money-challenged Cornelius and Barnaby convince Irene and Minnie to walk rather than ride downtown to Harmonia Gardens Restaurant.

The Harmonia Gardens scenes are lush with visuals, dance and tightly-timed humor. Kara Mikula is oh-so-funny at Ernestina Money, an “heiress” intent on spending Horace’s money. “The Waiter’s Gallop” is big and bold and akin to watching the Olympics’ rhythmic gymnastics. And the iconic “Hello, Dolly” oozes with affection and Broadway chorus line convention.

Other layers turning this into a theater feast are scenic artist Dusty Terrell’s gorgeous, towering vaudeville-inspired drops, Kurt Alger’s costume and wig design, conductor Anne Shuttlesworth splendid music direction and her bright pit orchestra, Craig Beyrooti’s sound design and Julie Duro’s lighting design which is so good that one of her lighting cues gets a laugh of its own.

Do not miss Riverside Theatre’s Hello, Dolly! It is superb, well worth a trip to Vero Beach to see a production that would cost you hundreds if you saw it on Broadway. And, yes, it’s that’s good.

Hello, Dolly! runs through March 27 at Riverside Theatre, 3250 Riverside Park Drive, Vero Beach, FL. It performs Tuesdays through Sundays with matinees on Wednesdays, select Thursdays and weekends. Tickets begin at $35. Call 772-231-6990, visit RiversideTheatre.com or click onto the ad on the left side of this page.