Riverside’s The 39 Steps Is A Hilarious Faux Hitchcock 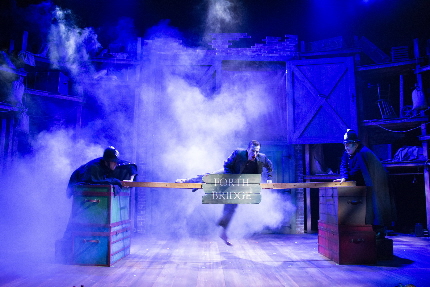 Face it. Resistance is useless when it comes to enjoying The 39 Steps. Any theater worth its comic salt will plunge head long into this madcap Hitchcock parody — Vero Beach’s Riverside Theatre included.

The show is so popular, by the end of the first week, the theater sold out all 25 performances. Indeed, the gags so gloriously over the top that groans are welcomed relief, brisk timing so tight it crunches under your feet like a stroll in autumn, four actors loaded with comic energy for their dozens of roles will all leave you happily exhausted by intermission.

The play, adapted in 2005 by Patrick Barlow from John Buchanan’s 1915 novel and a previous play by Simon Corble and Nobby Dimon, The 39 Steps is a high-camp romp through Alfred Hitchcock’s 1935 movie.

Set in pre-war Great Britain, the plot has all the goodies: A handsome leading man, Richard Hannay, who gets embroiled in a plot by German spies; a beautiful woman, who, like Hannay, gets caught up in the action; mysterious characters and last second getaways; and a slew of references to other Hitchcock films.

The theatrical “conceit” here is that a few items (and people) have multiple uses. Trunks get pulled on and off stage. Doors and windows are moved about as characters go through them. Streetlamps get dragged on from offstage and used in the silliest of manners.

And it’s all done with such alacrity by the professional cast that you barely have time to breath.

Dan Fenaughty takes on the Hannay role, which is like a two-hour aerobics marathon. He crawls through windows, jumps on moving trains, runs away from the coppers, yet still has time to woo a woman.

The plotline also involved a mysterious woman with a schtrong Cherman ackzent, a wee Scottish lass and a do-gooder named Pamela who has no idea how sexy she is. They are all played by Jessica Mosher, who is especially funny in her vampish portrayal of the German spy, Annabella Schmidt.

Rounding out the other 100 plus roles are two actors called “The Clowns.” Played by Bruce Warren and Seth Andrew Bridges, these two knit up the action. They become a vaudeville act, traveling salesmen, policemen, newsboys, spies, Scottish innkeepers and so many more.  Bridges is a hoot at the mysterious wife of Prof. Jordan. And Warren has such great fun that he steals the show in his many brilliant bits, especially those of a “bosomy” innkeeper; and the head of a Germany spy ring, to whom he brings a syrupy, villainous Sydney Greenstreet essence.

Director Trey Compton uses all his skills, including those of choreography and fight director, to fit together all the puzzle pieces. As is the convention with this play, coattails flap in the wind as the characters crawl along the top of the train… or when a door opens onto the Scottish moors. Actors bump up and down in a car as it travels a country road. Shadow puppetry, by design naively wrought, suggests a number of scenes, most vividly crop dusters bearing down on Hannay (a la North by Northwest).

However, for a comedy, this production does run a tad bit too long. The first act is fast and filled with such fury of action. The second act slows down considerably. Compton could murder a couple of lily-gilding darlings, like the frequent furtive moments between Hannay and Pamela, and speed up the final act.

Big kudos here to the creative team as well. Scenic designer Emily Luongo has devised a delightful playground for these actors, and for the audience. Luongo turns the black box Waxlax Stage into a deserted proscenium theater. Ropes, sandbags and ladders line audience walls, a collection of old props line stage walls. A ghost light sits in the center of the stage. An actual proscenium arch has been built complete with traveling curtain. It’s not surprising to read in the program that Luongo has designed for Riverside’s children’s programming. Typically, design for children’s theater must be filled with uninhibited creativity and playfulness. She certainly has brought those two ingredients to this production.

Jen Dasher’s costume design is exceptional as well. The costumes not only reflect the period but they are also highly functional in the lightning fast costume changes.

Craig Beyrooti’s sound design and Sarah Jean Elliott’s lighting design are both key to moving the plot. Indeed, the lighting and sound designs for the Broadway production both won the show’s only 2008 Tony Awards. And both designs at Riverside are excellent and polished. You can’t get better.

Applause is due to stage manager Kyle Atkins and his crew. The timing here is so exacting, so crisp that any slip would embarrass. There are no slip-ups. The cues, like the acting, are exquisitely performed.

There’s a poignant timing with the opening of this production. The play is frequently described as a Monty Python meets Hitchcock. The TV comedy troupe, Monty Python, was founded by Terry Jones, who died the night that Riverside opened this production. And, indeed, you can certainly see that wonderful madcap British influence in this play.

It is whodunit fun from start to finish.

The 39 Steps runs through Feb. 9 at Riverside Theatre, 3250 Riverside Drive, Vero Beach, Fla. Tickets are $65. Even though tickets are sold out, but you can get on a waiting list and cross your fingers. Call 772-231-6990 or visit RiversideTheatre.com.

This entry was posted in Performances, Reviews and tagged Riverside Theatre, The 39 Steps. Bookmark the permalink.