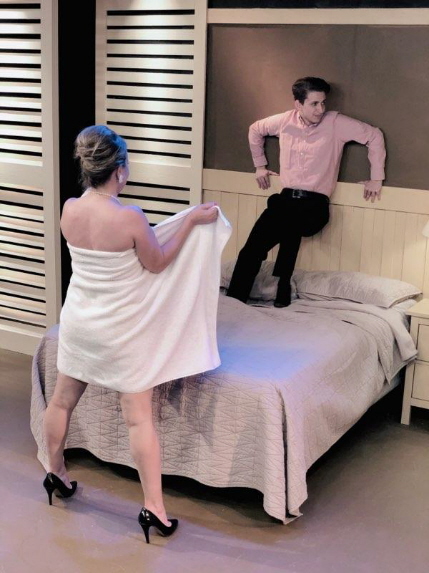 “Mrs. Robinson, you’re trying to seduce me! Aren’t you?” Benjamin (Elijah Pearson-Martinez) gets an unequivocal answer from Michele Verdi in Empire Stage’s The Graduate

Given the multiple challenges inherent in mounting a stage version of the iconic film The Graduate, the Empire Stage production does reasonably well because of the commitment of everyone involved, but it does not qualify any better than an average night of theater.

The 2000 stripped down chamber version of the 1967 film recreates the required key scenes and catchphrases including “plastics” and “Mrs. Robinson, you’re trying to seduce me! Aren’t you?” wisely without trying to imitate the original deliveries.

The theme of a generation feeling alienated remains surprisingly relevant if long accepted wisdom for the 21st Century when it seemed bracingly anarchic in the mainstream of 1967. Benjamin is a disaffected college grad unable to find purpose and direction when faced with a bleak wasteland of suburban shallowness, hypocrisy and meaninglessness stretching endlessly into his foreseeable future.

Out of boredom, he enters an affair with Mrs. Robinson, the alcoholic wife of his father’s best friend, and then develops a redemptive crush on her preppie daughter, Elaine. But where the original novel and film were wicked social satire, this is a pale photocopy with little electricity flowing from the stage, not even in the famed seduction scene.

To start with, the play takes a while to seduce the audience because it requires a preternaturally talented actor like Dustin Hoffman (or Richard Benjamin in Goodbye Columbus) to engage the audience when his character is almost catatonic for the first third of the story. You can get away with that on film, but not on stage. Elijah Pearson-Martinez does an increasingly solid, even winning job once Benjamin falls in love with Elaine, but his accurate artistically defensible choices in that first stretch can’t carry the play.

The episodic stage play uses a series of narrators to bridge time and place, but that only reminds audiences of the specificity of director Mike Nichols’ film. Most people cannot put in a mental lock box that film, which takes advantage of the strengths of its specific medium. Therefore, the play has a feeling of an abridgement rather than an adaptation.

The play was first done in London and then New York with Kathleen Turner and then in a truly abysmal road tour with Morgan Fairchild (I’m not kidding); the primary virtue of those experiences was that the leading ladies could be seen nude for a few seconds in a half-light.

The good news is that this production is directed by Leeds, who helps his cast highlight the subtler aspects of Terry Johnson’s faithful adaptation of the original dialogue-heavy novel by Charles Webb, which in turn was liberally quoted in the witty acidic screenplay by Calder Willingham and the late Buck Henry.

He expertly paces the proceedings and he also has a deft hand with the dry humor: You have to love how he choreographs Benjamin impulsively clutching Mrs. Robinson’s breast thinking it’s the right thing to do and then whips it back wondering if he has made a mistake. Or the deadpan look on Mrs. Robinson’s face when Benjamin tries to kiss her as he thinks you are supposed to do in a romantic tryst. They are doubtless in the script, but Leeds knows how to make the most of such moments.

Pearson-Martinez justifies his being cast when he reaches the turnaround scene in which he treats Elaine cruelly in their first date and then when she breaks down. Pearson-Martinez makes it completely believable that Benjamin finally sees what he is doing, recognizes Elaine as a human being and slowly comes to care for her. To morph like that in just one scene – credibly—is an achievment. From then on, the actor’s Benjamin becomes increasingly anxious now that he has found a goal—and a person—worth caring about.

The actor and Leeds also shine when Benjamin suddenly perks up in the last of a series of passionless assignations in which Mrs. Robinson reveals that she entered into a loveless marriage when she accidentally became pregnant with Elaine. His gleeful needling and cross-examining her is a hoot.

Michele Verdi creates a Mrs. Robinson who is not enigmatic like her film predecessor. Instead her imperious suburban matron with upswept hair and pearls is just long past bored and long past nurturing any human emotions like romance. Verdi makes it clear this ain’t Mrs. Robinson’s first trip to the rodeo. (Verdi doesn’t do a nude a scene; Mrs. Robinson exposes herself to Benjamin with her back to the audience by unwrapping a towel.)

It’s a genuine smile how, finding no ashtray in Benjamin’s bedroom, she dumps her expended cigarette in one Benjamin’s golden trophies. Verdi perfectly embodies a conscienceless cat toying with a hapless, helpless mouse. She certainly provides Benjamin and Elaine a nightmarish vision of a possible future if they follow the path their parents have set for them. But as with Benjamin, an emotionally absent, morally dead character isn’t strong enough to carry the first part of the play by herself.

It would be hard to imagine anybody or anything pulling Benjamin out of his abyss if it weren’t the fresh loveliness of Elaine so perfectly played by Gaby Tortoledo. With eyes that shine with the promise of the American Dream or grimace with pain at perceived betrayal, her Elaine is the one decent person in the entire play. Like Pearson-Martinez, Tortoledo makes Elaine’s halting unsure turnaround totally convincing when, frankly, common sense makes such an unlikely decision to put it mildly. (Run away, Elaine, run away. Trust me.)

Filling out the cast are Larry Buzzeo as Benjamin’s dad, a bartender and other characters; David R. Gordon as Mr. Robinson and the hotel clerk checking in Benjamin for the tryst; and Elli Murray is not only Benjamin’s mother but a way, way over the hill stripper.

In the end, The Graduate remains a gently funny, mildly entertaining piece. It’s a lot like the early Benjamin: not at all unpleasant, but mostly just a shrug.