Roof! Reaches Heights In Its Love Affair With Miami Locale 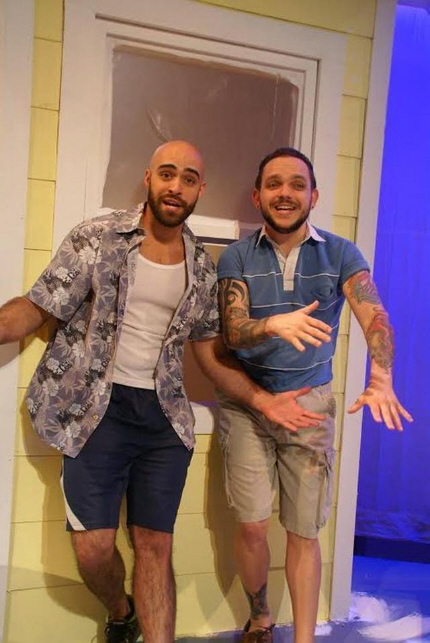 There’s a rhythm to Ricky J. Martinez’s writing in his new play Roof!, which is having its world premiere at New Theatre. If there was a tin roof in Roof! (there isn’t), the words would sound like a tap, tap, tap on the tin. It has to do mostly with how Martinez has constructed the piece, his Ode to Miami. It’s “Miami language dealt in a Felliniesque way,” says one of the characters. It’s true.

Roof! also gets its personality from the Miami-born, Cuban-American playwright who knows these characters inside and out – these are “bros” from his own his life or maybe they are different pieces of himself or perhaps a bit of both. The “bros” are twenty-something roommates Vic and Adam, creative types with dreams of being filmmakers, photographers. “We’re ‘Starsky and Hutch,’ ” Adam says.

It’s Friday night and time for a par-tay. They’ve invited friends over for a Bohemian-style barbecue that takes place each week on the rooftop of a Key West style house on Biscayne Boulevard in downtown Miami. The invitees are family, but they aren’t people from your bloodline, it’s those with whom you have formed an even stronger bond. “Familia. Family is what you create,” Vic says.
The action is a top floor kitchen and a rooftop hang out. The roof is accessible by climbing outside a window, where a barbecue and two lawn chairs create a makeshift party area. The best point for congregation and conversation, however, is the edge of the roof – seated, feet dangling.

This is Martinez’s world and this is the rhythm of Roof! Beers crack open, there’s talk of past, present and a wishful eye to the future. Act 1.

Then something happens and the future changes. Act II.

Roof! never departs from its focus of language and how it shapes things, people – Hispanic rhythms and the essence of Miami. Characters break the fourth wall and wax poetic on their own characters. They tell us in earnest that they are 4-D, each written to have a definite responsibility to the action of the play. And they do.

The set is on a higher level than the audience and to create even more impact on its language focus, the wall that’s eye level projects words such as “Wow!” Boom!” and to further the sense of place (we’re watching them above), projections show blue sky and clouds, background sounds have the whoosh of planes flying overhead.

The players are in their 20s with a world ahead of them. Vic is a photographer, who arrived from Cuba when he was eight with his father, now a successful writer on a book tour. Adam, a first generation Cuban, was proudly born in Hialeah (for locals, plenty of Hialeah jokes of the stereotyping Miamians know of the south Miami city are peppered throughout.) He is a filmmaker, attending college to learn the craft, with plans of leaving Miami for L.A. Maybe any day now, but he’s not letting on to Vic.

Vic is gay, but “not the limp wristed type.” Adam, straight with a girlfriend the audience never sees, is caught up in a flirtation with Colombian actress Gracy, who Martinez has created purposely as a stereotype. She’s the quintessential Miami Chonga. She announces herself: “Gracy Sanchez from Bogota.” She speaks in Spanglish, another Martinez nod to a distinct form of language and one that shapes personality. In this case, Gracy’s.

Vic and downstairs neighbor, Seth, a bearded British transfer student, have an attraction for one another. “Conversing makes everything more tolerable,” says the jaded and philosophical Seth.

Finally, there’s Keith, an Afro American drag queen from Liberty City. She’s made her mark as a deejay in some of the hottest clubs. Dressed in head to toe red (a fierce fur and boots up to here by costume designer Peter Lovello; her second act Chanel-esque suit is also dynamic), Keith makes an entrance. She’s in the midst of ferreting out some chisme (gossip).

(The originality of the characters is there, yes, however, there is a slight hint of another Bohemian group of twentysomethings, the rag-tag team in Jonathan Larson’s Rent. Just saying.)

In the second act, Roof! looks different. Nothing has changed physically for the audience – the set is still the same, the roof remains, but five years have passed. We’ve arrived at today. Adam remarks how there are bulldozers where their friends’ houses used to be. Life has move forward and so has Miami. So have they.
Watching actors Gabriel Bonilla (Adam), Mikey Fernandez (Vic), David Vega (Seth), Francesca N. Toledo (Gracy), and Joseph Long (Keith) put their own stamps on original characters is another thrill of seeing this original play take form. There isn’t a weak link in this ensemble and by the second act, each one has grown the personalities. The comedy has given way to drama and they handle the transition with ease. Any actor that follows in the footsteps of these actors, should Roof! be performed somewhere else, will have big shoes to fill.

Roof! has the chops to be ready for regionals. No doubt it could happen since the spotlight is shining on Ricky J. nationally right now. The premiere of Roof! arrived a month and a day after it was announced that Martinez had been awarded the prestigious Margo Jones Award, joining the illustrious company of past winners such as Edward Albee, Jane Alexander, André Bishop, Anne Cattaneo, Gordon Davidson, Christopher Durang, Jon Jory, John Lion, Lucille Lortel, Lynne Meadow, Gregory Mosher, Marsha Norman, Joseph Papp, Bill Rauch, and Lloyd Richards. The Margo Jones Award is given annually by the Ohio State University Libraries and OSU Arts and Humanities. Martinez is the first Floridian and first Hispanic in the award’s history.

To the rest of the country, Miami is exotic and Martinez’s peer into this world with Roof! heightens the wanderlust. While so many times it’s pertinent to say that plays feature universal themes, that is not what Roof!’s existence is. What Martinez has done is remain fully committed to his hometown and showing the rest of the world, as he says in his playbill notes, that Miami is “a one-of-a-kind city that must except [sic] itself for what it is and not for what people would like it to be.”

As Tennessee Williams’ relationship with New Orleans shaped his work, Miami constructs Martinez’s. In Roof!, he offers a fly on the wall glimpse into a city that continues to invent and reinvent itself, creating cultures and languages that wouldn’t and couldn’t exist anywhere else in the world.