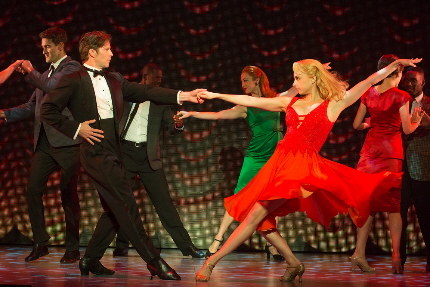 There’s really only one scene of dirty dancing in the stage adaptation of the film Dirty Dancing.

Broadway Across America’s Dirty Dancing: The Classic Story On Stage on tour at the Broward Center is a flawed and misconceived project with a noticeable lack of fire, but much can be forgiven when the show focuses on hardbodies writhing to infectious pop tunes.

And all its considerable problems are swept away in the final scene in which the hero and heroine triumphantly come into their own while dancing to the justifiably popular outburst of pure joy “(I’ve Had) The Time Of My Life,” which you’ll still be singing days later. When the hunky brooder Johnny (Christopher Tierney) lifts the winsome Everygirl “Baby” Houseman (Rachel Boone) into the air, it’s impossible to resist.

These pop film-to-stage undertakings rarely work. Just like stage versions of  Saturday Night Fever, Flashdance and Footloose, this effort cherrypicks the iconic playlist from the red hot 1987 film, augments it with other numbers and then takes a yellow highlighter to the screenplay to check off plot points like a middle schooler’s essay outline – each dispensed with in three lines of dialogue. In the penultimate scenes, plot points race by as if someone realized the clock was ticking close to 2 ½ hours. Fortunately, since 98 percent of the audience has come because they loved the movie, they unconsciously fill in the missing texture and complexities with recollections of the film. But it’s poor musical theater book construction from the original screenwriter Eleanor Bergstein.

It does not aim to be a musical in the traditional sense. Most of the music exists organically. Supposedly, the tunes are emanating from a radio, record player or the resort’s band, although an ensemble member sings along to provide the lyrics. Interesting idea, but forced in execution. Other than the fantasy finale, the only time that anyone breaks into song as if they were in a Lerner & Loewe musical is when a lovelorn staffer croons “In the Still of the Night.” The leading characters almost never sing; most of that duty is assigned to soloists Adrienne Walker and Doug Carpenter.

Still, the show retains the hits “Hungry Eyes,” “Yes,” and, of course, “(I’ve Had) The Time Of My Life,” which Wikipedia quotes the BBC as saying is the “third most popular song played at funerals in the United Kingdom.” But it is weirdly and unnecessarily jammed with perfunctory snatches of early 1960s R&B and, much worse, extensive kitschy “adults” numbers of the period so that the dancers can mambo, samba, tango and cha-cha at length – not what the audience came to see or hear.

These wastes of time at the expense of illuminating book scenes are endless. Remember the stupid hula number that Baby’s sister performs for perhaps 30 seconds at the talent show in the film? Here, it goes on and on. And honest to God, in what I assume is meant as comic relief, one altercocker stops the show in the worst way delivering a solo of “Besame Mucho,” augmented with a few pelvic thrusts. I’m not kidding.

The production jettisons Kenny Ortega’s groundbreaking film choreography and replaces it with perfectly adequate but not especially exciting work by Kaye Champion from 2004, updated by Michele Lynch. It really only kicks loose twice: in the early party scene with the sole example of actual dirty dancing and even then primarily it’s Johnny and Penny’s scorching pas de deux, and second, in the satisfying blowout by Johnny and Baby in the finale.

If you’re attending other than to fill out a subscription commitment, you already know the plot of star-crossed lovers from different social strata who find their missing self-worth in the example and attentions of the other.

But those familiar with the film will be surprised that the stage script forcibly injects with the subtlety of a jackhammer “a sense of the period” by frequent references to the Civil Rights struggle. Set in the summer of 1963, this may be the only fully integrated Catskills resort in history. The shallow grandson of the resort owner says he’s going south with the Freedom Riders to sign up black voters. The entire resort shuts down to listen en masse to Martin Luther King’s “I Have A Dream” speech broadcast over the loudspeakers (at night). And, I am not making this up, the assemblage of wealthy patrons and young staff gather round a campfire to passionately sing “We Shall Overcome.”

The production’s real virtue are its leads who have a credible enough chemistry and whose characters exude a hunger for something more in their lives.

Tierney made headlines in 2010 when he fell 30 feet from the Broadway set of Spiderman: Turn Off the Dark. In tight black jeans and ebony muscle shirt, he’s sex-on-a-stick perfect as the steamy blue collar young man with a sensitive side and a poor sense of his own worth. His athletic dancing has a frenetic, almost desperate edge to it just right for this troubled hero, and his speaking voice is a deep sexy hum.

Boone, promoted out of the chorus after the first year of the tour, looks a great deal like Jennifer Grey, but she also has Baby’s requisite expressiveness ranging from confusion to confidence. Her smile is a window into her shyness and her exultation. She is obviously a fine dancer, yet she is convincing in her awkwardness as Baby learns to mambo over a series of scenes.

This idea was born in 2001 in a New York workshop, then bowed in a full Australian production in 2004 that toured for years in London, Toronto, Holland, South Africa and Germany. This North American tour kicked off in the summer of 2014. It has never been to Broadway.

The director for this and all the earlier iterations is James Powell who made a career directing Les Misérables around the world, but who was responsible for the impressive retooling of its most recent edition.  Both productions share a bent for evocative projections rather than physical set pieces.

The band is a burn the house down combo featuring the wailing trumpet of Andy Tichenor and saxophone of Brian Krock, but you suspect that a stage technician was sweetening the sound.

Dirty Dancing: The Classic Story On Stage is far from a terrible evening (like the legendarily bad Saturday Night Fever) and it does end so exuberantly that you’d have to be dead inside not to cheer when Johnny says, “Nobody puts Baby in a corner.” But, no, you will not have the time of your life.

Note: The most startling moment in the show’s second performance came late in the second act when a confrontation between Baby’s parents literally sizzled, flashed and popped — and then the entire Broward Center for the Performing Arts went black. The emergency lights came on within five seconds or so, and it took the crew about six or seven minutes to reboot the lights and sound. The blackout was due to a power failure that affected the entire neighborhood, a spokeswoman said Thursday.

This entry was posted in Performances, Reviews and tagged Broadway Across America, Broward Center for the Performing Arts, Dirty Dancing. Bookmark the permalink.