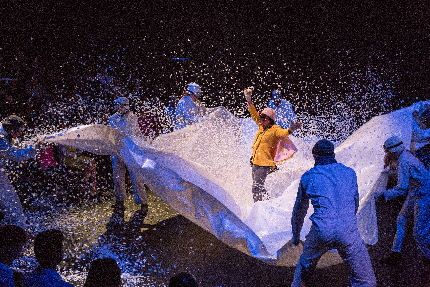 In three visits to Miami, the House Theatre of Chicago has always exuded an underlying love of the gloriously imaginative storytelling only theater can deliver.

But its current entry at the Arsht Center, Rose and the Rime, is specifically about storytelling. It starts telling an original fairy tale about a plucky girl seeking a magic coin that will dispel an endless winter – intentionally classic memes designed to “delight children and the child in all of us” as advertising spinmeisters say.

Yet three-quarters of the way through our story, after our heroine has defeated the ugly witch and saved her hometown as you knew she would, the tale takes a decidedly dark turn more appropriate to the Grimm Brothers or even the Coen Brothers than the Disney Brothers.

What results is an unusual hybrid that is both entertaining and thought provoking. If the first section’s plot is too simplistic to enchant adults for nearly an hour, the House’s brilliant physical staging is breathtaking magic for anyone who loves theater. If the last few scenes are a bit too mature in moral complexity for children to appreciate, well, it can be argued this is a children’s show not really aimed at children – even though the children attending opening night were enraptured throughout.

Rose and the Rime wryly uses the venerable fairy tale model to remind us that real life does not always end happily ever after and human nature sometimes gets in the way of people learning from experience. (Read William Goldman’s superior novel The Princess Bride.)

Setting up or misleading the audience (depending on your view), “snow” falls on the patrons and the playing area from the moment people begin taking their seats on three sides of the stage. Children are encouraged to enter the playing space – a white tarp – and frolic with the actors in the accumulating clumps of confetti.

The initial plot is a gleeful mashup of other stories. Rose (Paige Collins) is cheery little girl living in Radio Falls, a neighborly Bedford Falls/Grovers Corner kind of town mysterious afflicted with an endless winter. Her loving but subdued uncle and caregiver (John Henry Roberts) relents to her entreaties to know her past. He tells her that her parents died when a witch stole a magic coin that brought on the permanent rime frost. Although the night time conditions are perilous, Rose sneaks off with her sled to find the witch. She speeds across a huge frozen lake (remember this is by Chicago folks) which is in danger of cracking beneath her. On her journey, she is befriended by a bunny, beset by wolves and barely survives a monster blizzard.

This spectacular blizzard is one of the coup de theatres that the House is known for. It is created only by the ensemble shaking a white tarp and tossing around white confetti as a raging storm resounds through the audio speakers and the lighting flashes throughout the black box space. Terribly simple. But believe it, the skillful melding of sensory elements sets off the audience’s imagination as a willing participant in summing up the storm. It is a stunning moment of physical movement, visual staging and pure spectacle that the House specializes in as it did in The Sparrow and Death and Harry Houdini

Rose then confronts a witch (Ericka Ratcliff) with wild eyes, grizzled voice and monstrous claws who flies around like every child’s nightmare. She even eats Rose alive like Red Riding Hood’s grandmother ending in the wolf’s belly.

At this point, the House authors drop in a few clues to the coming left turn – even though you may not notice them at the time. The witch intones a couple of sentences that have an unsettling ominous ring.

In the witch’s tummy, Rose finds the magic coin and escapes, essentially killing the witch.  Rose returns home with the coin, the snow melts and the town celebrates by doffing their overcoats in favor of swimsuits and hold a barbeque with hotdogs. Rose grows up and falls in love. And then things start to swerve sideways. To say more would spoil the show.

The storytelling includes acrobatics, puppets and a dozen other performing arts disciplines stirred together in a witches’ brew by writers Jake Minton, Chris Mathews and House co-founder Nathan Allen who also serves as the director. Every aspect of the show is outstanding including Colette Pollard’s scenic design, Melissa Torchia’s costumes, Lee Keenan’s lighting, Joshua Horvath’s sound, Kevin O’Donnell’s music, Tommy Rapley’s choreography and many others.

These people luxuriate in the artificiality of theater. You can clearly see the flying rig that allows the witch to soar overheard; you can even see ensemble members yanking on the winch system off to the side. But the company seems to be bragging, “Look how we can take these elements and trigger a reaction inside you far more profound than any CGI.” Their exhilarating work should be an inspiring template for local theater artists who want to celebrate theatrical storytelling.

While the story moves steadily forward, you can argue that it all feels too slight to command adults’ attention even for a show that lasts 80 minutes. But like Scheherazade, something – in this case visually arresting stagecraft – keeps you sufficiently intrigued until the final image.

Rose and the Rime from House Theatre of Chicago, part of the Theater Up Close series, runs through May 18 at the Carnival Studio Theater, Ziff Ballet Opera House, Adrienne Arsht Center, 1300 Biscayne Boulevard, Miami. Performances are 7:30 p.m. Wednesday-Saturday, 4 p.m. Sunday and 3 p.m. this Saturday, April 26, only. Running time 80 minutes with no intermission. Tickets are $45. Call (305) 949-6672 or visit www.arshtcenter.org. 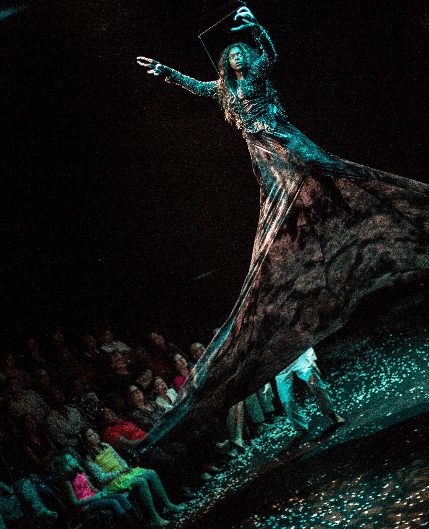 Ericka Ratcliff as the Rime Witch