Rush Into The Woods To See Slow Burn Theatre Company 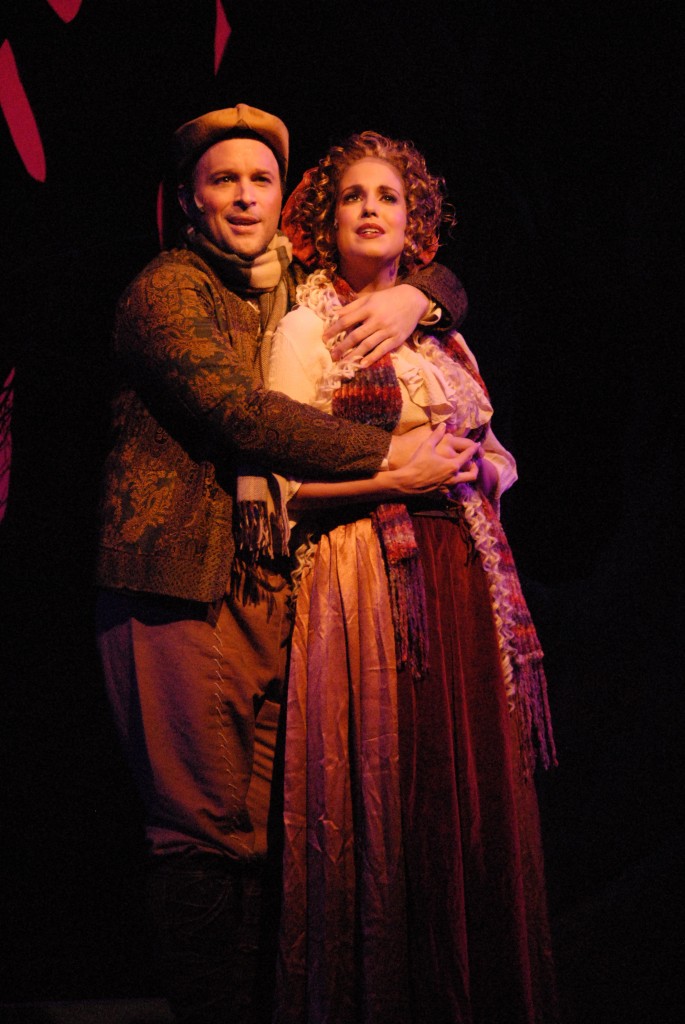 Once upon a time there was a scrappy little theater company that dreamed about mounting large scale musicals that other companies couldn’t or wouldn’t attempt. The Little Theater That Could didn’t have the money, it had no name recognition, it performed on the east edge of the Everglades and it always aimed higher than it had the resources to carry off. But our heroes were blessed with talent, imagination and a lot of elbow grease.

Fortunately for South Florida audiences, the fairy tale has a happy ending. Slow Burn Theatre Company’s current production of Into The Woods is a solidly delightful and enthralling evening that should not be missed by lovers of musical theater in the region – and that includes people in Miami-Dade loathe to travel to the wilds of western Boca Raton.

You can carp about odds and ends of the production all night. But the overall success is undeniable for this massive production with so many moving, precision parts and notoriously challenging music and lyrics by Stephen Sondheim.

Starting with the unobtrusive but rock solid leadership of director/choreographer Patrick Fitzwater and musical director Manny Schvartzman, this production again features a large non-Equity cast who would be steadily employed by the region’s musical theater production houses if there was any justice, plus a team of skilled designers who have created a fully-realized fantasy world with a tenth of the resources of many other companies (One of the company’s co-founders said their total budget was less than what one theater recently spent on wigs.)

Sondheim and script writer James Lapine penned a long and complex adult fable that weaves together three stories: Cinderella, Jack and the Beanstalk and the central one invented for the show about a baker and his wife who go on a quest into the woods to reverse a witch’s curse that prevents them from having a child. Mixed in with a storyteller’s Cusinart are Rapunzel, Red Riding Hood and enough characters to require 19 actors.

Although the dark show is frequently chosen – and rarely pulled off  – by community theaters and high school drama departments, it is a highly sophisticated and thematically rich work about  a cornucopia of issues, especially jettisoning illusions and coming together as a community to prevail over the cruel vagaries of the real world. But most affectingly, it’s about parent-child relationships. Imbued throughout is a clear-eyed indictment of human beings’ shortcomings, yet also compassion for their weaknesses and ultimately admiration for their forbearance, courage, resolve and perseverance.

Slow Burn’s virtues are so many that it will be impossible to give everyone their due. But let’s start with how well the cast conquers Sondheim’s sadistically intricate words and music, especially a cast with day jobs and limited rehearsal time. It’s a major accomplishment that not only have most of them mastered the tongue-twisting words and rollercoaster melodies, but that the ensemble en masse maintain the diction required to land the torrent of words in the title number.

Some individuals go beyond exemplary enunciation to parse out the almost Shakespearean complexities of Sondheim’s pretzel verbiage. One sterling example is Anne Chamberlain as Cinderella rationalizing that making no decision is the safest decision in “On the Steps of the Palace.”

Chamberlain finds every nuance in the classic Sondheimian ambivalence, making comprehensible such lyrics about her prince-suitor, as: 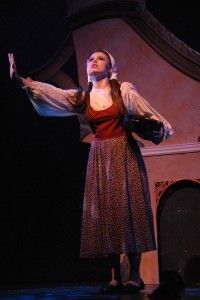 But then what if he knew
Who you were when you know
That you’re not what he thinks
That he wants?
And then what if you are
What a prince would envision?
Although how can you know
Who you are til you know
What you want, which you don’t?

Others wring out every emotion from their guts such as Matthew Korinko’s distraught baker in “No More” or Mary Gundlach in just about anything she sings as the witch, but notably “Last Midnight,” “Lament” and “Children Will Listen.”

Still others, with fine voices, bring a comic sensibility to their roles along with strong voices, notably Lindsey Forgey as the daffy determined Red Riding Hood discovering sex, and Noah Levine as Rapunzel’s fatuous prince and Andy Fiacco as Cinderella’s even more fatuous prince (doubling as the lecherously hungry wolf).

One of the off-beat, but oddly effective choices by Fitzwater, is the ubiquitous narrator, usually played by a dapper distinguished older chap in a three-piece suit. Here, Conor Walton plays him as a medieval sprite/peasant fey enough to emcee a drag queen gala. Why this works is a mystery, but it does.

If there is an unsung hero (pun intended), it’s Schvartzman. Obviously, he’s the leader of a preternaturally skilled five-piece combo that not only sounds like twice the number, but has mastered the complex multi-layered numbers as if they had been playing it for a month when they’ve only been together a week.  (Kudos to Nick Trotogott on a band room worth of percussive sounds, Ivy Adams on second keyboard, Andrea Gilbert on reeds, and various live brass instruments from Wallace E. McMurray Jr. that enhance the sound immeasurably.) But the work Schvartzman must have done with the cast to produce such a smooth delivery of the Rubik’s Cube score with multiple vocal lines going at once, that must have been Herculean.

It’s easy to overlook Fitzwater. His direction is so fluid, so steady, his choreography inventive without being showy, his overall leadership toward a common vision is so sure-footed that you don’t notice his work.

The creative team under Fitzwater has outdone itself. While they still could use a few more lights illuminating the front of the stage, the lighting design by Lance Blank nimbly creates multiple locations and moods accented with frequent grace notes. For instance, when Jack sings of giants living in the clouds, the song ends on a big note and Blank sends the beams of moving light instruments up from the stage floor rising up to the rafters.

Ian T. Almedia once again has created what must be a score of set pieces including the essential frightening tangle of trees and branches that echo the psychological, emotional and moral snarls facing our heroes and heroines.

And last but not least, Rick Pena (who also plays Jack) has created several racks of classic costumes that make their own witty comments on the characters, down to prosthetic masks for the wolf and witch.

While the designers and actors are paid, Slow Burn relies heavily on the generosity of unpaid volunteers in many of these areas, Fitzwater has said.

If you want to nitpick, some singers weren’t as uniformly strong and missed notes. One major player who clearly has a nice voice simply botched most of her numbers opening night. Maybe she has a cold. The sound coming out of the wolf echoed inside his mask like he was in a cave. Sound and light cues weren’t as sharp as they should have been, but there were only a handful of tech rehearsals for this highly complex production.

Believe this: Slow Burn’s productions are not Carbonell eligible only because co-founders Fitzwater and Korinko are prudently not ready to add the expense of the third weekend required by the Carbonell rules. The rest of the musical houses in the region should be grateful. These folks would give them one hell of a run for their money.

To hear a podcast interview with Fitzwater and Korinko, click here.