She Shorts Is Female-Centric, But Message Is For Everyone 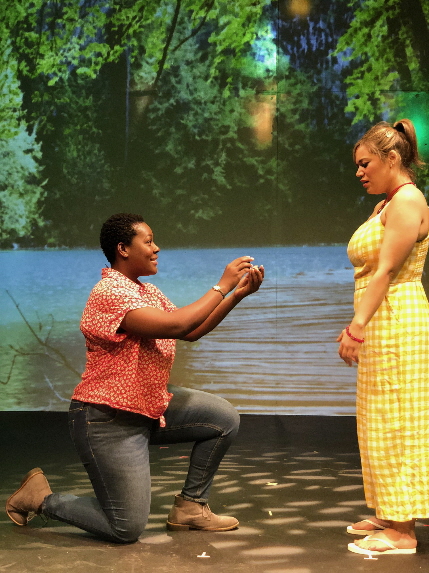 Alright ladies and gentlemen, boys and girls, she’s and he’s, and those who would prefer not to self-identify, Thinking Cap Theatre and City Theatre’s summer short play fest, She Shorts is for you, so that means everybody.

And, City Theater has proven, once again, that they can take their show on the road, (the Carnival Studio Theater and the Susan Westfall stage at Miami’s Adrienne Arsht Center is their permanent home), put together a series of short plays with a theme, get the right actors, have high production values, and make it all work.

This summer, they’ve teamed up with Thinking Cap Theatre in Fort Lauderdale and Nicole Stodard, producing artistic director of Thinking Cap Theater (who also was costume designer for this short play fest) for the newly incarnated She Shorts.

Coming just on the heels of Thinking Cap’s I’m Coming, original lesbian-focused short plays derived from workshops, She Shorts doesn’t focus on any one group of women; it encompasses themes of motherhood, females in the workplace, women’s hopes and dreams for their futures, and two stories about she-she couples.

None of the plays, however, were written by South Florida playwrights – the closest playwright hails from Central Florida; many from New York City, others from New Jersey, Canada, Los Angeles, Boston, but all but one were written by women. There were, however, a few Southeastern Premieres, a Florida premiere, and a world premiere.

SoFla directors were Elena Maria Garcia, Gail Garrisan, Margaret M. Ledford, who is also the Artistic Director of City Theatre, and Gladys Ramirez. The ensemble was made up of local actors.

One highlight was the production values, especially the theme that ran through vintage video footage preceding each short play, starting with a great clip of the band Royal Teens singing their 1957 hit “Short Shorts” (remember: “Who wears shorts shorts? She wears short shorts”) and the famous Nair commercials of the 1960s with other vintage gems projected before each play begins.

The set is minimalistic and the performance is in three-quarter seating, with projections on a front wall. Small set pieces, white tables and chairs are used in most of the plays, unobtrusively moved in between each piece. One play doesn’t have any set at all, but the actors set the stage entirely by suggestion. Clotheslines hang above the staging area and over some of the seating with a collection of actual, different varieties of shorts. Lighting design, sound editing, and projection design is by Bree-Anna Obst. Set and prop coordination by Alyiece Moretto-Watkins. It all works seamlessly.

So, here’s a rundown of She Shorts, with commentary. The plays are a mixed bag, not every one a winner, but all-in-all 90 minutes that’s summertime fun well spent.

Webster’s Bitch by Jacqueline Bircher:  Who knew a short about Webster’s dictionary and lexicographers could be the basis for a very funny play? At the office of Webster’s dictionary, one of the employee’s sisters (Courtney King) is waiting to go out for happy hour while two employees are on deadline for the 13th edition online dictionary update. When it’s discovered that one of the male boss’ comments is making the rounds on Twitter (J.K. Rowling and Shonda Rhimes have apparently already retweeted the post) after calling a female supervisor “my bitch,” the meaning of the word takes on a larger social context in a discussion of how Webster’s could have missed not including that particular phraseology. They cringe when they realize that their competition the Oxford English Dictionary has addressed it. The inclusion of the chirpy sister is an unnecessary supporting character, and the play could have been more effective as a two-hander (towards the end, the editor in chief arrives; again the suggestion of the character could have worked just as well), but the plot is creative and Webster’s is a great opener. Ramirez directs. The cast is Jeanine Gangloff-Levy, Bianca Garcia, JC Gutierrez, and King.

Square Footage by Jessica Moss. Nate’s apartment is small, really small, and when her girlfriend, Maggie, moves in with her giant antique bed, there’s a problem with square footage. The square footage creates a space problem not only in physical space, but in their relationship. “You need space to love a person,” one of the characters says. But when they move the bed to create more space, they find an even bigger gap. Daryl Patrice and Jordan Patriarca are partners at odds with square footage. The beauty of this play is that everything is created by suggestion. There is no actual large bed and the playing space is empty, but Ledford’s direction and Patrice and Patriarca are so believable in their visualization of the giant problem, you can picture the large, antique four poster without even having to see it. This device makes the short play large.

Ballgirl by Gracie Gardner. One of two monologue plays in the rundown, King is a ball girl at the U.S. Open and in between watching volleys and the top seeded player on the court with his hair tied back in a ponytail, the ball girl questions her life through an internal dialogue she shares with the audience. She confides she makes lists, which promptly appear as projections on the wall for her to prove her point. When she has the most incredible ball catch of the day, she feels self-conscious that the focus is on her. It’s a character study in what it means to be all too human amid the pains of growing up and figuring out your place in the world. Garcia directs, creating a real feel of a pro tennis court and the rigorous movements of covering the court. King beautifully finds the emotional highs and lows, which coincide with the ups and downs happening on the court.

Sweet She by Jeff Locker. Two women (Stephon Duncan and Garcia) share the differing perspectives of how they fell in love. Boo admits she stalked Caroline on Instagram before the two met at a wedding, while Caroline dreamily recalls their happenstance meeting there. Locker’s dialogue has the characters’ stories weaving in and out of one another and it is a beautifully poetic piece that closes the first act. Garrisan directs with a lovely soft touch.

Act II begins with Miles of Homemade Candy by Cassie M. Seinik. A single mom is scurrying around getting ready for Halloween trick or treaters while her son is getting dressed to meet his friends for a night of collecting candy. Mom’s worried the pirate suit they have for him may be outdated since the Pirates of the Caribbean  movie franchise isn’t top of mind anymore, but her 14-year-old has another idea of who he wants to be for Halloween. When Miles (Gutierrez) comes out dressed in grandmother’s clothing in found in an attic, Edna (Gangloff-Levy) is stupefied. Miles explains to her that he feels good when he dresses as a woman. Gutierrez plays Miles a bit older than 14, and the quick acceptance of the embarrassed mom goes from Zero to OK in a short amount of time. Not one of the most captivating of the collection, although the premise is interesting.

Work It Bitch by Monet Hurst-Mendoza. Directed by Ramirez. Two office workers dish about being women of color in the workplace while in the company ladies room. One is African American, the other Latina. They speak of their role in the world in general. When interrupted by white women at different times who enter the ladies room, the complexion of the conversation changes. When another black woman enters the space, they feel they’ll find another kindred spirit, but they have a surprise in store. An interesting commentary especially in the current political climate amid remarks by President Trump and the reaction of a quartet of progressive women of color of the Democratic Party.

Rights Restored by Liv Matthews. The second monologue in the group finds Gina (Duncan) exercising her right to vote. “I was 18 when I got sent away,” she says, telling the story of a teenagers’ mistake of taking a car for a joy ride. After serving her time, she shows up at the polls and proudly is placing a sticker on her jacket that will tell everyone she voted. The right to vote is the cornerstone of American democracy, according to the ACLU, and Rights Restored creates a platform for deep thinking on this constitutional debate. Garrisan keeps the actress stationary to deliver her monologue, which makes a commentary that she is standing strong, and Duncan’s bright-eyed, twinkling portrayal will leave you smiling and cheering for Gina.

Egg Timer by Cristina Luzarraga, brings the whole cast together for the finale. A “sperm” with a miner’s light on his head and a map of the female reproductive system is trying to find his way into fertilizing an egg to the joy of the woman’s ovum who want to become human beings. Each of them has a distinct personality: One is the smartest, the other the prettiest, and another disabled (this characterization was mildly ADA offensive). The existential nightmarish play finds a woman being pushed by her biological clock into reproducing. “You don’t want to have a geriatric pregnancy,” one of the ovum threatens. But when Birth Control shows up in a red velour track suit with a gold chain and an oral contraception pack as its medallion, no sperm or egg is getting hooked up anywhere. Patrice steals this one as the hard-as-nails, twerking Birth Control who is ready to stop everyone in their tracks. Directed by Garcia, one of SoFla’s queens of comedy, she has the skill to keep everything moving along so that this over the top piece doesn’t turn into a trainwreck, which it could have the potential to do, but Garcia keeps everything squarely intact as do the talented cast.

One Response to She Shorts Is Female-Centric, But Message Is For Everyone