Six Gets The Royal Treatment 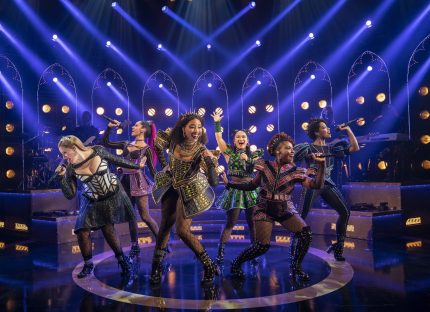 Welcome to South Florida, queens, with your exhilarating, in-your-face Six, about the six wives of England’s King Henry VIII, running through Oct. 23 at the Broward Center for the Performing Arts in Fort Lauderdale, switching to the Arsht for a run October 25-30. Both runs are part of the Broadway Across America production.

The energetic, sexy Six definitely delivers the royal treatment—a lively score, strong singing and a can’t miss story. And the opening night audience at the Broward Center were more than ready—cheering and clapping the minute the curtain was raised as if Six was a rock concert. And in a way it is.

There’s even a historical context as Six introduces the six spouses of England’s King Henry VIII, who ruled from 1509 to 1547, and left a string of wives in his wake. Hence, the lead song “Ex-Wives” describing the women’s fates—“Divorced. Beheaded. Died. Divorced. Beheaded. Survived”—each fate sung by the appropriate wife.

Any achievements Henry VIII did for his country, especially his Navy and radical changes to the English Constitution, have been overshadowed by his despicable treatment of his wives, his short temper, bullying ways and his penchant for banishing or beheading anyone who disagreed with him or with whom he was displeased with at that moment. He also was known for his separating England from papal authority and his extravagant spending.
His treatment of his wives stemmed from the fact that he demanded a male heir. Instead, his wives gave him two daughters (one of whom ruled as Elizabeth I), one sickly son Edward VI (who died at age 15) and suffered many miscarriages among them. It never occurred to him—and doubtful he would have allowed this to be public—that his bad health brought on by his obesity, gout, probably diabetes, low sperm count and his staid lifestyle due to an old injury may have been a cause, no doubt leading to his death at age 55.

But Six isn’t about Henry, it’s about his queens who, as they sing “tonight we are live!”

These 16th century spice girls are fierce, and more than a bit angry at their treatment, decked in high-heeled boots, fishnet stockings, rhinestone-studded corsets and, of course, crowns, as they exude a power on stage they were denied in real life.

During the 80-minute production, the audience gets to know each queen through their individual songs that chronicle their life with old what’s his name (he’s had enough name checking in this review) and what led to their banishment, beheading or survival. At one point, the queens suggest that maybe that dude was most remembered because of them, and that’s probably true.

Six is the epitome of a tight ensemble with each actress working together as a solid group while also shining in their individual songs. During the ensemble numbers, the audience doesn’t know which actress to focus on as each shows their individual personalities while not overshadowing the group.

So, let’s give these queens their due.

Khaila Wilcoxon as Catherine of Aragon kicks off the night with “No Way,” explaining that she is not leaving the throne; she was forced to, of course, through divorce. Storm Lever as Anne Boleyn sings about her demise in “Don’t Lose Your Head.” Jasmine Forsberg as Jane Seymour (considered the one he “really loved”) recounts how she loved him, gave him a son but died in childbirth with “Heart of Stone.”

Olivia Donalson, with her winning smile, tells during “Get Down”  how as Anna of Cleves that guy was attracted to her comely visage as portrayed in her portrait, but he then rejected her when he saw her in real life; the kicker was she could care less and was happy to go back to Germany and her own wealth.

Didi Romero as Katherine Howard remembers how, since she was 13 years old, men only wanted one thing from her in the sexy “All You Wanna Do.” Gabriela Carrillo as Catherine Parr describes the man she really loved before she was forced to marry that man because if he says “It’s you”, then it’s you/ No matter how I feel” in the ballad “I Don’t Need Your Love.”

A handy little guide in the Playbill gives a thumbnail sketch of each queen, as well as their musical inspiration.

Toby Marlow and Lucy Moss had the idea for Six while daydreaming during a poetry class at Cambridge University during 2017. Six was launched at the Edinburgh Festival Fringe, eventually landing on London’s West End, earning five 2019 Laurence Olivier Award nominations, including Best New Musical. A UK and Ireland tour are running concurrently with the London production. An Australian and New Zealand tour will launch this year at Sydney Opera House with dates set for Melbourne, Adelaide and Wellington.

Six was headed to Broadway, but closed in March 2020 due to the pandemic on what was supposed to be opening night. Six is now playing at the Brooks Atkinson Theatre on Broadway in New York City. Six has won 23 awards in the 2021/2022 Broadway season, including the Tony Award for Best Original Score (music and lyrics) and the Outer Critics Circle Award for Best Musical.

It’s been said for generations—no, make that centuries—that live theater doesn’t attract young audiences. Instead, it seems that every generation has its own theatrical experiences that speak to them. Rent did that several generations ago. Disney extravaganzas showed children and young adults, not to mention their parents, the magic of live theater. Dear Evan Hanson brought in social media, teenage angst and host of other ideas. Hamilton made history palpable with a rap beat. Wicked and Mean Girls showed girl power and the power of friendship.

Now we have Six, and it’s all hail, queens.

Visit sixsouthflorida.com for information on tickets on either venue.

This entry was posted in Performances, Reviews and tagged Broadway Across America, Six. Bookmark the permalink.