The Opponent Is In Ourselves at African Heritage Cultural Center 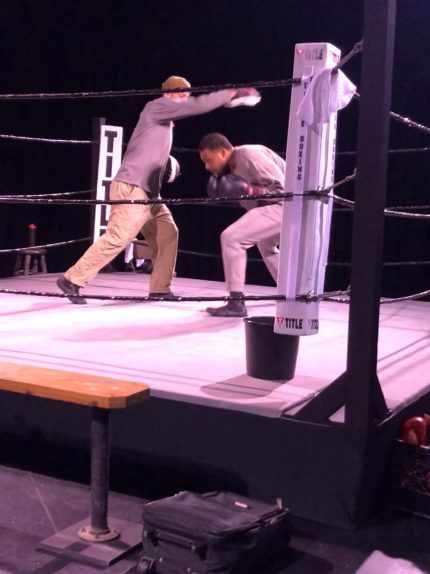 One of the great truisms of human nature is that often our greatest opponent is ourselves.

So while the drama The Opponent is set in a boxing ring where an ambitious young fighter and his career-scarred trainer spar physically and verbally, it’s their own flaws – and later their pasts – that provide adversaries that they cannot best.

The premise is that Donell Fusels (Myers), a potentially promising fighter, is prepping for a crucial showcase fight against a better opponent who is clearly on his way to championships. Donell is fit and quick; he double skips when jumping rope. But he is also overconfident, arrogant and unwilling to submit to demanding discipline such as wearing a protective helmet.

Seeking a bit of tune-up, he has come to the rundown Louisiana gym of Trémont “Tré” Belmont (Galán), an older trainer who once fought a championship-level contender and is now on the cusp of being a complete wash-out.

In between slugs and frequent obscenities in this father-son mentor-mentee relationship, Donell talks about his obsessive dreams of besting tonight’s established pro. He rates success in terms of the opponent’s achieved wealth, fame and especially his car — signs of a larger sense of success than simply winning a fight. Tré is a tough if supportive mentor, collegially but unfailingly demanding that Donell buckle down and focus on the fight. Tré says, “If you ain’t scared, you’re stupid.”

Donell also wants Tré to come watch the fight; the first act ends as Donell leaves for the battle.

Act Two occurs five years later. Donell has been wandering from one minor low-rent fight to yet another across the south. He is married and has a child, but he usually leaves them in Hot Springs, Arkansas, while he tours looking for a fight. He has little money; he can barely pay for an hour’s sparring with Tré.

He is physically a shred of his former self; he has difficulty fully extending his arm for a straight-on punch. He has gained a bit of weight and has a slight limp that Tré had warned him years ago might develop but Donell ignored. But in discussions it’s clear he has sustained emotional damage as well and a deep disappointment that life has not turned out as he hoped.

He ostensibly wants some training, but actually he wants to hang out in hopes of running into a first-rate manager they used to know. He has become what Tré and he derided in the first act as a Road Dog.

Tré is virtually burned out and his mind isn’t as sharp as it was. Donell responds to Tré’s criticism reminding him that he too lost his big fight. But while Tré acknowledges that he lost that linchpin fight on points so many years ago, he willed himself to literally get back up when he was smashed to the mat. That is what he sees Donell, now chastened and battered by life, seems unable to do.

The two end up blaming each other for the disappointment of their lives, when the flaws were character shortcomings rooted inside themselves.

One aspect of the production which might seem a plus is actually a problem. Tré speaks with an authentic-sounding Louisiana accent and Donell speaks as if he’s been hit the mouth once too often. It provides a kind of musical sound, for sure. But the resulting marble-in-the-mouth delivery of dialogue makes the first act very hard to understand, especially when they refer to other fighters with colorful names.

Another issue is Neveu only hints at the men’s flaws and shortfalls in the first act.  It’s only when Donell returns five years later that the interior failings start to slip out, then take center stage. Even then, it’s difficult to explain specifically what has destroyed their lives.

Williams, who has had some training in the sport, has staged this in near constant motion except for occasional moments when the two men stop to connect on a deeper level. For instance, a beautifully stage moment occurs when Tré is unwrapping the long swath of red wrappings from Donell’s hands. One long stretch connects the two men as they talk, a moment of unity and understanding.

Bladimir Santos Laffita was the fight coordinator and the two actors went into intense training early in the rehearsal.

Molded by Williams, the actors do a commendable job, especially considering this is Myers first leading role and Galán’s first professional role. Where they excel is creating visual pictures of men accustomed to using their bodies.  Donell is tense and coiled in the first act, wounded in the second. Tré’s slender body is loose in the first act and then slack in the second.

By the way, this critic hasn’t been at this venue since Covid hit. Since then, they have upgraded the interior, adorned the exterior with colorful designs. Its next play slated for March is Lynn Nottage’s epic Ruined.