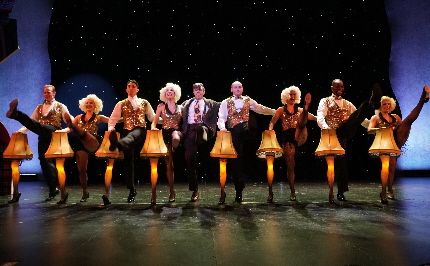 There’s a hilarious glorious scene of pure hallelujah in Slow Burn Theatre’s A Christmas Story the Musical in which 20 adults and children dressed in sparkly costumes resembling the fabled Major Award leg lamp form a kick line in a RKO-worthy production number.

You won’t remember that image from the now classic holiday film, nor the source material short stories in Jean Shepherd’s In God We Trust, All Others Pay Cash and certainly not in Shepherd’s wry satirical original monologues over WOR radio in the 1950s and 1960s.

But that’s the key to thoroughly enjoying this stage adaptation: Each edition makes the most of its genre’s strengths with little worry that it’s significantly different in tone, style and even theme than its predecessors. So when the teacher Mrs. Shields leads another stage-spanning tap production number entitled “You’ll Shoot Your Eye Out,” just go along with it.

Certainly, the 2012 script by Joseph Robinette credits the 1983 film script by Shepherd (who died in 1999), filmmaker Bob Clark and Leigh Brown. It loyally ticks off many of the iconic images that audiences would not forgive if they were cut: from the mortifying pink rabbit costume to the Ralphie daydreaming of rescuing his family and friends with his Red Ryder BB gun with a compass in the stock and “the thing that tells time.”

The perky score by Benj Pasek and Justin Paul (better known for Dear Evan Hansen which has no artistic relation to this at all) unabashedly echoes Broadway tropes from the 1930s to the 1950s.

To those, like this critic, who grew up listening nightly at bedtime to the humorist/monologist Shepherd on the radio and who adore Bob Clark’s film, you have to adjust a bit. Clark’s relatively low-budget low-key film was a quietly funny and charming look back at an earlier time. Shepherd’s book and radio monologues had that those elements but they were filtered through a New York sophisticate club comedian’s affectionate but pointedly sardonic reverie in which the narrator was gently laughing at himself and the naïve innocent world he came from in the dying steel towns of the Midwest during the waning of the Great Depression.

This slam-bang stage version is a more generalized look back at childhood and family – while still being quite funny and indulging in singing and dancing. For instance, the show gives character-revealing solos to Mother and The Old Man,  which are absolutely worthwhile and in sync with the musical’s kindler, gentler vibe but they change the tenor of the work.

What all of these versions share, but in decreasing amounts, is nostalgia for a time that never actually existed but that our child’s memories have rewritten as a simpler, clearer world.

To be fair, sometimes this stage edition goes just a little too far over the top but it’s such infectious fun that it’s easy to forgive. And some scenes don’t quite work, like the licking the flagpole scene which the team tries to rescue by tossing in a song and dancing kids. Similarly, Ralphie finding the rifle late Christmas morning is an affecting moment in the film, but goes by here without a moment to appreciate. The entire scene of kids appealing to a blowsy Santa Claus at Higbee’s department store is a mess with unintelligible dialogue and lyrics. And the truth is that there really was no need to musicalize this work to begin with. But you could say the same about Shaw’s Pygmalion and Hugo’s Les Misérables.

And who cares? Director/choreographer/sound designer/wigmaker Patrick Fitzwater and his folks are having a terrific time and that enthusiasm pours through his cast and out into the eagerly receptive audience. You’d have to be Scrooge not to feel the same thing. The opening night audience, clearly well-acquainted with the film, started giggling the moment the script even began hinting at a favorite moment such as when Mother pulls out the smothering snowsuit for Randy.

It certainly helps that he has hired such an outstanding cast: Michael Norman, who played Ralphie  on a national tour, smoothly inhabits the bespectacled Everyboy trying to negotiate the challenges of pre-adolescence. Amy Miller Brennan, one of our favorite musical theater actresses, is the nurturing, insightful Mother everyone wishes they had, deftly and efficiently keeping the family functioning smoothly while operating within the restrictive mores of the time. Matthew Korinko delivers just the right bemused spin as the on-stage narrator Shepherd. Jaxson James is a fine little brother Randy; and Lindsey Corey delivers a show-stopping number as the teacher, leading the aforementioned tap jamboree.

But special notice goes to Tony Edgerton as The Old Man. Edgerton was a fine Rooster in the Wick’s Annie and was passable in Slow Burn’s so-so Jekyll & Hyde. But in this role Edgerton’s comic sensibilities are allowed full reign, not to mention giving him the chance to exercise his full baritone-tenor. Most civilians won’t realize it, but this is a first-class musical comedy performance on all levels (even giving a high kick). He simply becomes the classic lower middle-class king-of-his-castle family man who still dreams of some extraordinary ego-enhancing event will elevate his conventional life.

Slow Burn has hired about ten cute stage kids for the ensemble, all of whom can sing and dance, and whom the company throws into production numbers at every opportunity. The children in the ensemble, who also play roles, include Jackson Greenspan, Jacob Harris, Jolie Kirsten, Christo Amygdalitsis, Brayden Labgold-Carroll, Cristina Gabriela Lopez-Rico, William H. Moss, Sofie Poliakoff, Jack Rodman and Bailey Sheridan. The playbill credits Samantha O’Donnell as the “child wrangler,” a job most of us would need serious drugs to handle.

The visual and aural aspects are memorable: Thomas Shorrock’s lighting; Rick Pena’s seemingly hundreds of costumes that range from period drab Midwestern small town garb to fantasy elves; similarly an endless supply of wigs by Fitzwater. The scenic design by April Soroko, supplemented by Gateway Set Rentals, is evocative and humorous in its own right. Michael Ursua has molded the singers to the full-throated musical tracks.

It’s the kind of brightly-wrapped gift box with a big red ribbon that should make the entire family smile.

A Christmas Story the Musical presented by Slow Burn Theatre Company through December 29 at the Amaturo Theater, Broward Center For the Performing Arts, 201 SW 5th Ave., Fort Lauderdale. Performances are 7:30 p.m. Wednesday-Saturday (including Christmas Day but not Wednesday the 18th when there will be an 11 a.m. sensory-friendly performance), 2 p.m. Saturday- Sunday. Running time 2 ½ hours with one intermission. Tickets are $49-$65. Call (954) 462-0222 for tickets, at www.browardcenter.org or #Ticketmaster.com; in person at Ticketmaster outlets or the Broward Center’s Auto Nation Box Office. Info at www.slowburntheatre.org 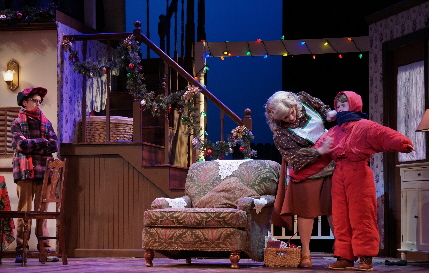