Touring Musical ‘Once’ – Again — Returns To Charm and Move You 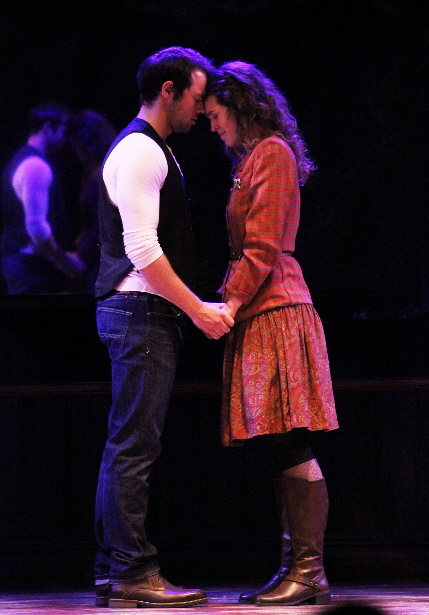 If you’ve never seen the Broadway production of the charm-infused musical Once or missed the Actors’ Playhouse version (or just want to see it again), this national touring version currently at the Lauderhill Performing Arts Center is as faithful a reproduction as you could ask for.

Every effort has been made  —  from the Dublin pub set to the costumes to the staging to the hero’s battered guitar — to duplicate the original New York production of the poignant story of wounded hearts finding resurrection, but never quite reclaiming what they had lost.

The effort is helmed by J. Michael Zygo who appeared in the Broadway version and who has scrupulously recreated the vision of director John Tiffany, movement by Steven Hoggett and musical direction by Martin Lowe.

The production is a 21-city tour under the Apex Touring nameplate, but it’s actually a subsidiary of Prather family’s Broadway Palm company which has begun locally producing musicals at the Lauderhill Performing Arts Center, most recently West Side Story and next year Kinky Boots and Disney’s Beauty and the Beast.

Jack Gerhard is the singer-songwriter “Guy” ready to give up his art because of a lack of public response. His girlfriend has moved to New York and it’s observed his “life has stopped.” Mariah Lotz is the quirky Czech gamin “Girl” with a blunt directness as if time is too precious to waste. These actors, recent graduates of the same college, instantly create winning protagonists who in another world might have become lifelong lovers. Blessed with lovely expressive voices, they do justice to the famous duet “Falling Slowly,” which propelled the 2007 cult film with composers Glen Hansard and Marketa Irglova. These two deftly play the submerged yearnings that that their characters dare not express until the final moments of the evening.

But the show is engaging from the vibrant jam sessions of folk-tinged numbers that entertain the audience as it files into the auditorium. Stamping feet, sawing power fiddles, soothing strumming of acoustic guitars and aggressive percussion drive the score, but the ensemble is capable of vocally melding the incredibly moving a capella reprise of “Falling Slowly.” And this critic never fails to be entranced by the song “Gold” when the hero’s solo debut in a pub engages the other musicians in the room one by one and they join in a mutual affirmation of the power of music.

This entry was posted in Performances, Reviews and tagged Lauderhill Performing Art Center, Once. Bookmark the permalink.