Slow Burn’s Avenue Q Is An Irreverent And Joyous Winner 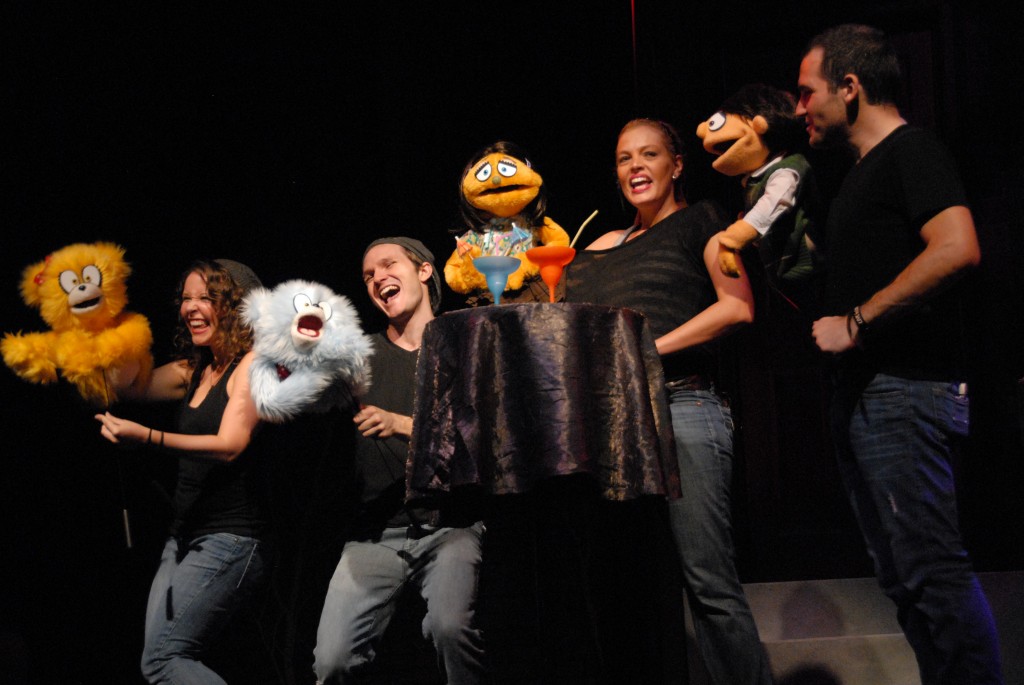 Life isn’t fair. That’s one of the bittersweet themes in Slow Burn Theatre Company’s Avenue Q. But what’s really unfair is that there’s only five performances left and unless you hustle this weekend or next, you might miss it.

Once again, the little theater with a below-modest budget and full-scale ambitions has simply nailed another production, this time delivering a raunchy, irreverent and joyous opener to their fourth season in way west Boca Raton.

If you’ve seen three or four previous professional productions, be assured this one takes a back seat to none of them, whether it’s the engaging, polished performances of 20-somethings or director Patrick Fitzwater’s gentle but steady propulsion of the proceedings or Rick Peña ‘s made-from-scratch puppets.

Puppets. Yes, for the few that don’t know, Avenue Q is a witty musical satire that posits an ad hoc family of neighbors facing the trials of young adulthood in the 21st Century, played out in a run-down urban neighborhood of row houses. But this isn’t Lanford Wilson. The show intentionally echoes TV’s Sesame Street where furry and fleecy creatures mix in harmony with humans of all ethnicities, affectionately lampooning the disillusioning disconnect between childhood and adulthood.

In this R-rated vision, the puppets not only use the expletives common to conversations in a college dorm, but they couple in raging passionate sex on stage. They are searching for their purpose in life, acknowledging unconscious racism in themselves, negotiating the rocky road to true romance and succumbing to the seduction of suddenly available temptations.

The residents include Princeton (Mike Westrich) a recent college grad whose expectations have instantly run aground; Kate Monster (Nicole Piro) a lovable teacher in training who has a crush on Princeton; the genial Nicky (Christian Vandepas and one arm of Courtney Poston); his roommate Rod (Westrich again) a Republican investment banker deeply stowed in the closet; building superintendent Gary Coleman (Pamela S. Stigger) yes, that Gary Coleman; Christmas Eve (Ann Marie Olson) a Japanese-American with a thick stereotypical accent and the dream of becoming a mental health therapist; her boyfriend Brian (Trent D. Stephens) a woebegone stand-up comic; Trekkie Monster (Vandepas and Poston again) who is addicted to Internet porn; Lucy T. Slut (Piro again) a voluptuous lounge singer; the Bad Idea Bears (Vandepas and Poston again) fluffy cute hedonists and troublemakers (Vandepas and Poston again); Mrs. Thistletwat (Poston again) a grumpy old educator, and Poston filling in for virtually every character at one point or another.

When the musical’s creators first mounted the Tony-winning show in 2004, they assumed its primary audience would be their peers: young adults weaned on the Muppets who found modern life more unnerving than what Big Bird had promised. But to the writers’ surprise, the show resonated with Boomers and their grandparents who recognized the angst from their own pasts and with teens already aware of an uncertain future when they left the womb of family and school.

With only three weeks’ rehearsal and competing day jobs, there are a few shortfalls here: enunciation was not always as sharp as you’d like in the group numbers and one performer didn’t pick up her cues quite as briskly as the rest. But generally Fitzwater and company have this vibe down cold.

Fitzwater is not a look-at-me director, but he always keeps his actors fluidly in motion and helps his cast find the emotional truth under the laughs. And while Avenue Q is meant to make fun of the artifice of puppetry by having the puppeteers visible, Fitzwater and Lighting Designer Lance Blank still pull off a bit of magician’s misdirection from time to time to conceal when an actor slips offstage to get another puppet or when one actor is voicing a puppet being manipulated across the stage by another actor.

Casual observers might dismiss this as a light-hearted lark which doesn’t challenge anyone. But, in fact, the actors had to learn an entire new skill set in puppeteering. A special challenge is concentration. Actors often say they must stay “in the moment” or the audience will sense them thinking about where to dine after the show. With puppets, it’s doubly hard because a lapse in attention can turn the puppet from a fully credible being into a piece of inanimate fleece or fur.

But this never happens with this amiable cast under Fitzwater’s direction. The actors’ tirelessly expressive faces and body language combine with the puppets’ tilt of the head or ingenious arm movements choreographed as carefully as the human’s dance steps.

This is a good time to stop and talk about Slow Burn’s personnel. Over the years, Slow Burn has attracted a changing cadre of talented local young artists. This is a tier of actors, musicians and designers who have not yet been recognized by the “major companies” as anything but chorus members. Most are working for car fare in vest-pocket troupes in tiny venues. Slow Burn has given them the chance to undertake major acting roles in large-cast musicals or give staffers major design challenges. These opportunities showcase their abilities and given them the chance to hone their evolving skills on assignments they’d never get at the tentpole theaters in the region. Most of the time – not all, granted – they prove to be up to the challenge.

Led by the enthusiastic Fitzwater and co-founder Matthew Korinko, the troupe has a can-do dare-anything DIY attitude that is infectious even when some aspects of a show stumble a bit. Producers ought to be attending every opening night looking for talent to poach. 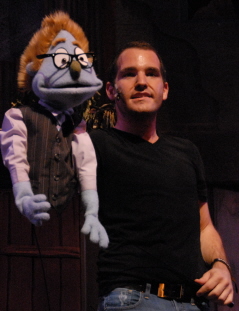 But what is quickly turning into a hallmark of Slow Burn productions is the “discovery” of one or several young journeyman actors who are such a good fit for their parts and who so gorge themselves on the challenge that even if you’ve seen them in other shows, you scratch your head in awe and say, “Who are those guys?” For instance, last season it was Cindy Pearce as Penelope Pennywise in Urinetown the Musical, and in Into The Woods, it was Anne Chamberlain as Cinderella. Mary Gundlach as the Witch and Slow Burn’s longtime leading lady Lindsey Forgey as Red Riding Hood. 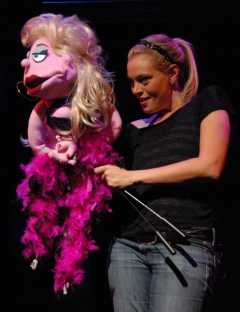 While it’s almost criminal to single out anyone in an ensemble this uniformly strong, it’s impossible to avoid praising Westrich and Piro’s singing chops, animated facial expressions and ability to make the puppets come alive. Piro often has to have arguments with herself, voicing both Kaye and Lucy with Poston actually operating one of the ladies at the other end of the stage. Westrich’s body language subtly switches from the angst-ridden Princeton to the slightly fey Rod.

The show is chock-full of memorable and droll moments, but the takeaway scene is when Olson’s Christmas Eve starts to sing in pidgen English the torchy number, “The More You Ruv Someone (The More You Want To Kill Them).” About a third of the way into the song she launches into a pure bravura Broadway belt that would have stopped the show if Fitzwater hadn’t want to keep the pace humming.

A nod is due once again to Slow Burn’s loyal creative team who do wonders with so little money: Scenic Designer Ian T. Almeida, Lighting Designer Blank (who still needs a couple of lights downstage center) and Sound Designer Traci Almeida who has finally conquered the high school auditorium’s aural problems.

Of course, one of the stars of the production not only doesn’t appear, but was attending a niece’s first birthday party on opening weekend – puppetmaster Pena, a Slow Burn actor who usually doubles as the costumer. Avenue Q required him to build 21 large creatures (plus three talking packing boxes) that echo but do not copy the Muppets. Peña based most of his designs on the original Broadway creatures created by Rick Lyon, although Peña has created his own take on Rod and Princeton.  His whimsical yet inexplicably human-seeming creations are absolutely the equal of anything the Henson shop has produced.

A final hat tip to Musical Director Manny Schvartzman who has guided the cast through the score’s harmonies and to the rest of his band (Anthony Campisi, Nick Trotogott, Greg Minnick, Rupert Ziawinski) whose jaunty sound drives the entire evening.

Veteran theatergoers have almost certainly seen Avenue Q before. It ran on Broadway for 2,500 performances, opened a Las Vegas sit down company, then toured the United States and was exported to other countries. When it closed on Broadway in September 2009, it reopened a month later off-Broadway where it’s still playing.

If you’ve seen it many times before, you may feel like you’re not seeing anything new, just the same thing very well done. But if you’ve only seen it once or never at all, this is a terrific reason to drop in on the old neighborhood.

Side note:  Fitzwater announced Friday that the season opener next fall will be the stunning musical, Next To Normal, about a family struggling to cope with the mother’s manic-depressive disorder.

To read a feature about the creation of the puppets and the actors learning to use them, click here.