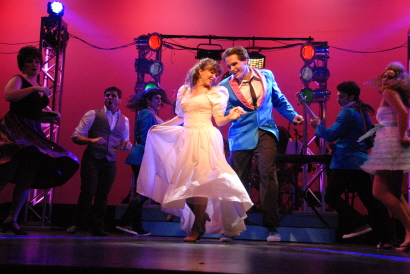 Spoiler alert: Courtney Poston and Clay Cartland get together at the end of Slow Burn Theatre Company’s The Wedding Singer / Photos by Gemma Branham

It’s something in the way he moves, to paraphrase George Harrison. Clay Cartland’s body language – even trying to be graceful and precise – is not what we daydream we look like when we’re dancing with joy. It’s what we really look like: a trifle goofy, all flying elbows, but not caring because we are ecstatic to be so alive in that moment.

That’s an awful hifalutin’ analysis for a review of Slow Burn Theatre Company’s daffy production of the summer trifle The Wedding Singer,  but it’s emblematic of why the evening feels like a sweet, sloppy kiss from a scruffy dog that could really use a trip to the groomer, but who’s lovable all the same.

What this silly smile of a show undeniably lacks in polish and consistency, its cast makes up for with grinning enthusiasm and goofball abandon under Patrick Fitzwater’s direction and choreography. As an entry in the romantic comedy genre, you might yearn for it to touch your heart a bit more, but it succeeds as a gentle hoot.

Based on the 1996 Adam Sandler movie spoofing 1980s pop culture,
this 2006 musical was never a major success on Broadway but it became guilty pleasure for thousands of fans. Fitzwater and company wisely do not try to duplicate it and Cartland sagely avoids channeling even a hint of Sandler. They find their own approach and stay loyal to it.

Robbie Hart (Cartland) is a Lost Boy living in his grandparents’ basement who is losing faith in his dream of being a successful songwriter. His day job is as the guitarist and emcee of a rock band who entertains at weddings in suburban New Jersey banquet halls. The band specializes in the “latest” music of the mid-1980s, tamed down for middle-brow customers.

Robbie’s appeal as a wedding entertainer is that he is so obviously in love with the glory of true love itself.  This comes clear when, playing a gig the night before his own wedding, Robbie meets the waitress Julia Sullivan (the endearingly winsome Courtney Poston). She joins him on break near a dumpster to help him write a quirky dopey love song that he wants to play the next day for his beloved.

But Robbie’s shallow fiancee Linda (the perfectly skanky Nicole Piro) sends him a Dear John letter as he stands at the altar, sending him into a hilariously overwrought tailspin. It culminates in Robbie unloading his uncensored bitterness during the band’s next wedding gig with a toxic song claiming that no one in the room has a true relationship.

Julia has been dating and finally gets engaged to a self-involved Wall Street insider trading Glen (a delightfully fatheaded Rick Hvizdak) who cheats on her and mistreats her.  Of course, Robbie and Julia fall in love and what ensues is pretty predictable as the star-crossed lovers keep getting their wires crossed by ludicrous misunderstandings until the joyous finale.

Like so many modern film to musical stage adaptations, the need to make room for songs claims its own casualties. The narrative flits through iconic plot points and scenes that film fans expect and then relies on the sketchiest of character sketches such as the misbegotten Saturday Night Fever. Even when they work like Legally Blonde, the musicals feel constructed and unorganic; the audience ends up just wanting to get on to the next song. The rare exceptions are Hairspray and The Producers, both were crafted by the master bookwriter Thomas Meehan. The script here by Chad Beguelin and the film’s screenwriter Tim Herlihy rarely grabs you.

The just serviceable score is comprised of production numbers and introspective ballads by Matthew Sklar, later to write Elf. They might evoke the middle-of-the-road rock of the era, but you won’t be able to recall a single melody the next day. Beguelin’s lyrics are also perfectly adequate but as memorable as Chinese food.  They fall into two categories: intentionally banal to reflect the characters’ lack of sophistication, and an occasional run of witty lines lampooning the Pleistocene Era’s cultural touchstones such as Ivan Boesky and Ronald Reagan’s jelly beans.

But when you look back at the numbers listed in the program, you smile at the fading memories of the energizing curtain raiser, “It’s Your Wedding Day,” the gentle duets “If I Told You” and “Grow Old With You,” and the satirical production number depicting corporate greed, “All About the Green” in which Glen nixes the idea of investing in Starbucks’ idea of a three-dollar cup of coffee and opts instead of New Coke.

What saves this on the stage is the company’s wholehearted commitment to deliver a lively show. Additionally, Fitzwater knows the piece’s underlying virtue is that decent everyday people are pursuing dreams. They may be modest, simple dreams of love and success, but they are so universal that an audience is charmed by their purity. 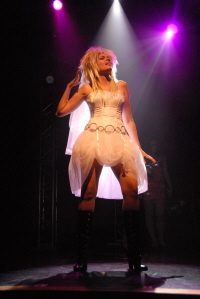 Slow Burn has a real talent for mounting “serious works” like its superb Side Show this season. But Fitzwater and co-founder Matthew Korinko also have a fondness for what they call “the fluffy slot” in the summer, filled  last year by the campy musical Xanadu and next year, High Fidelity. Unfortunately, their taste for the wacky does not always result in the company’s strongest works (it’s Urinetown being an exception). This production feels sloppy and ragged. Lyrics and lines are sometimes unintelligible.  Some dance moves are not as crisp as they could be. It just doesn’t land solidly.

But Fitzwater has a gift for casting and then leading that cast to solid work. His best call here was Cartland, who has evolved over the past few years into a solid comic actor and musical performer in works as diverse as the sympathetic best friend in tick…tick…BOOM! and the unhinged golfer in The Fox on the Fairway. He seems like the genial guy in the apartment down the hall, but he exudes the sense that whacked-out goofiness could erupt at any moment. A high point of the show is his over-the-top grief at being dumped, expressed in the obscenity-laced lament “Somebody Kill Me.” He’s also blessed with a strong, warm and supple voice that doesn’t call attention to just how well he has mastered the material.

Poston proved she has a terrific show voice as one of the twins in Side Show that. Here, she doesn’t score as strongly (well, the songs themselves don’t give her much to work with), but as the ‘80s version of the wounded wholesome girl next door she caresses her songs with such loving affection that she wins you over every time she walks on stage. Any man, straight or gay, who doesn’t want to take Poston’s Julia out to dinner-and-a-movie must be dead inside.

The supporting cast puts across that they’re all having a good time and you should come along. Conor Walton is delightful as the Boy George wannabe keyboard player. He just grins with a devilish gleam in his eye that celebrates that he is way out of the closet yet no one around him is sharp enough to pick up on it. Domenic Servido isn’t as vibrant as the Jersey Shore representative who probably wants to be Eddie Van Halen, but he gets by. Penny Mandel gets a couple of fun numbers as Robbie’s grandmother including a modified rap number. Piro is a stitch as the slutty Linda who appears in a frilly wedding dress and biker boots. The standout is the fiery Erica Mendez as Julia’s over-sexed cousin Holly who tries to seduce Robbie. Mendez frequently scorches the stage, especially with her intro to the first act closer, “Saturday Night in The City.”

Shout outs are due to the rest of this cast made up of familiar faces from Slow Burn’s repertory company including Rick Peña, Jerel Brown, Ben Solmor, Jonathan Yepez, Lauren Bell, Sabrina Gore, Kaitlyn O’Neill and Alisha Todd.

Slow Burn is a low-low-budget company and while set designer Ian T. Almeida has done some amazing work with no money on such show as Into The Woods and Assassins, the strapped budget shows here. The minimalist sets look like something built by the high school drama department.

Perhaps the money went into the costume budget because once again Rick Peña has constructed in his garage a score of inventive, evocative outfits that you hope no one will find at the back of your closet, everything from Whitesnake castoffs to Madonna bustiers.  Look at the production photos and see how a costume designer can elicit laughter just by what he puts on stage.

The Wedding Singer is just a calorie-less glass of iced down Crystal Light, but sometimes that’s exactly what you need for a warm summer solstice night.

Side Note: Slow Burn’s finances restrict it to a very limited run until next season when it will add a third weekend at the Aventura Arts & Culture Center. So if The Wedding Singer sounds like your kind of show, book now for next weekend. 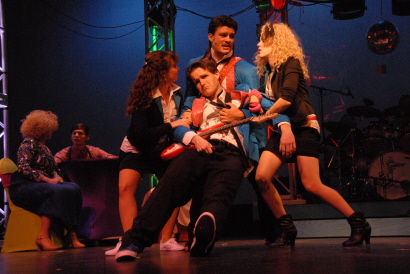