SoFla Symphony Delivers Many High Notes With Porgy and Bess 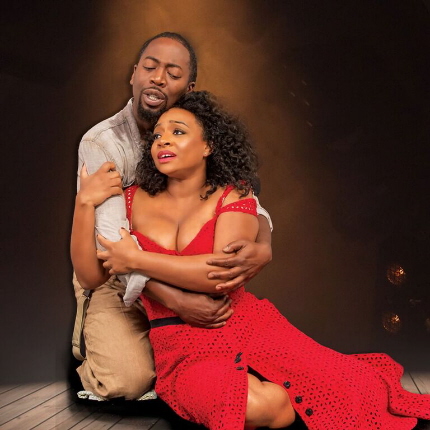 If there is one disappointment about the South Florida Symphony’s ambitious staging of Porgy and Bess it is that there aren’t more opportunities to see the production.

The Wilton Manors-based symphony scheduled only three performances of the George and Ira Gershwin 1925 opera, with a libretto based on DuBose and Dorothy Heyward’s novel. The only one in Miami was Wednesday, Jan. 16 inside the Knight Concert Hall at the Adrienne Arsht Center for the Performing Arts. Then on Saturday, Jan. 19, Maestra Sebrina Alfonso trucked the show to her hometown and the place where she started the orchestra as the Key West Symphony Orchestra 21 years ago. That was at the Tennessee Williams in Key West.

A third performance is Wednesday, Jan. 23 in Fort Lauderdale at the Broward Center for the Performing Arts, where a grand gala will close the run.

The opera is a big undertaking for the symphony, which has been doing more of these daring hybrids in the last few years. Last year, the orchestra collaborated with the Martha Graham Dance Company on a world debut of Graham Company choreography set to music by South Florida composer. The new choreography is now part of Graham’s permanent repertoire.

Alfonso got the idea of staging Porgy last year when bass baritone Neil Nelson, who has performed frequently with the SoFla Symphony, told the maestra she should consider the opera in some way, perhaps presenting it as a whole, or spotlighting some of the music. One to take on a challenge, doing the entire production would be daunting, but she was game. It all came together when she was approached by now Miami-based Richard Jay-Alexander, who has directed everything from concerts in the Hollywood Bowl to working for years as executive director of the New York office of producer Cameron Mackintosh.

As the icing on the cake, Alfonso enlisted to be the scenic design visionary the Key West native Paul Tate dePoo III, who has designed for big-scale Broadway, regional theater such as the Maltz Jupiter Theatre and opera companies. It had all the makings for a triple threat production, and it is. First, Jay-Alexander has placed the 70-piece orchestra on stage, rather than in the pit, putting Gershwin’s orchestral score on the same par as the theatrical action. A double thrill.

Then, dePoo’s scenic design, using video projections as the backdrop, had those in the audience transfixed (one woman was noticeably pointing). Its prominent feature was a sketch-like rendering of row homes on the opera’s setting of Catfish Row. The sky and some scenes behind the homes changed moods along with the action – once in a while the top of a large ship would float behind the rowhouses, or the moon would appear full. In the hurricane scene, one would have expected rain inside the Knight; it was that powerfully realistic.

Set in 1920s South Carolina, the Gershwins’ Porgy and Bess is a “folk opera” about a group of townspeople in an impoverished black neighborhood of Charleston. Crippled beggar Porgy rescues the drug-addicted Bess from her abusive lover Crown. Working against Bess, too, is Sportin’ Life (the expressive Jermaine Smith, who has performed the role before; it shows), a pin-striped suit, clownish drug dealer who keeps her hooked on “happy dust” (a.k.a. cocaine).

Nelson as Porgy was all at once tender, yet tough. The singer/actor also had to negotiate his performance with a four-wheeled, low-to-the-ground contraption as his means of getting around. Nelson crawled on and off the device without missing a beat. As crude as the four-sided, wooden-slatted mobile was, it seemed to not fit into the time period. However, the effectiveness worked as it made Porgy’s disability a barrier for many of his dreams, and, when he was forced to go up against Crown to fight for Bess.

Nelson was at his most vocally rich in the showpiece “I’ve Got Plenty o’ Nuttin.” In his duets with Bess, he was beautifully controlled, without overshadowing his singing partner.

As Bess, soprano Brandie Sutton played the high and lows of her character, both evoking emotion in her acting and singing, creating an almost Mimi-esque character (“La boheme”), a rendering that may have spawned comparisons to that famous operatic character before, but not that I am aware of. This was the beauty of Sutton’s ability to create her character’s story.

Baritone Michael Redding, as the abusive Crown, never gave into a machismo caricature, but presented the villain as someone who could only thrive when he had control. One of the highlight numbers in Porgy and Bess is Crown’s Act II “Red Haired Woman,” and Redding took command of the stage to deliver the bold song effectively.

Standouts in the supporting cast and ensemble (and, by the way, there wasn’t a weak link in the massive cast) were Simone Z. Paulwell as the piously grieving widow. Her dramatic rendering of “My Man’s Gone” was met with bravos and applause. Gwendolyn Brown as Mariah was a delight in her solo, “I Hates Your Strutting Style.”

The acoustics at the Knight Musical Hall, while usually the best anywhere, sometimes swallowed up the voices of the singers. And, while you wanted to hang on every note and word, despite the intimacy of the Knight, there were times it felt like a struggle for the listener to get that clarity.

In the conversation of American theater, there have been studies, arguments, and theses on Porgy and Bess: Opera or musical? In this rendition, it’s smack dab in the middle. And, bravo to that.

The South Florida Symphony Orchestra will perform Porgy and Bess in its  third and final performance at 7:30 p.m. Wednesday, Jan. 23, at the Broward Center for the Performing Arts, 201 SW Fifth Ave., in Fort Lauderdale. Tickets are $40 to $200. browardcenter.org. Running time is two hours and 30 minutes with a 20 minute intermission.