Something Rotten Is A Hoot For Theater Nerds & Novices Alike 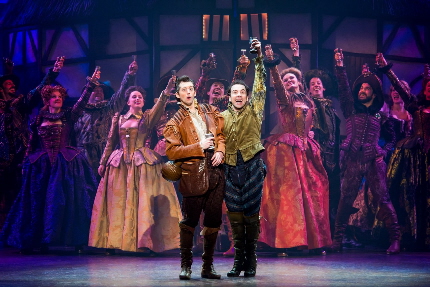 If there is a corner of Heaven reserved for musical theater nerds who know Stephen Sondheim’s middle name, likely one stage is rotating The Drowsy Chaperone, [title of show] and, as proven by the national tour now at the Broward Center, Something Rotten.

But you don’t have to know that Sondheim and Andrew Lloyd Webber share the same birthday to adore the hilarious send-up of musical comedy tropes melded with an equally wicked spoof of Shakespeare.

On one hand, literally every few seconds there is an in-joke about the Bard or musical comedy embedded in the dialogue, staging, choreography, sight gags, even the notes of the score itself. But even those benighted souls who wonder how normal people can break into song in the middle of a scene will be entertained by the madcap staging by director/choreographer Casey Nicholaw and uninhibited performances fueled by some glowing power plant inside cavorting bodies.

In 1595 London, struggling playwright-performers Nick and Nigel – the Bottom brothers – are constantly outshone by the reigning rock star of theater, their former colleague William Shakespeare.

With a dig to Elizabethan-speak, two of Bottom’s actors echo hundreds of thousands of schoolboys over the centuries: “Nigel, can’t we just write like we speak? // Yeah. I haven’t understood a single word in our last three plays.”

This leads to an ever-escalating production number extolling the specifics of this revolutionary concept. There must be witty nods toward, who can count, a hundred musical comedies mashed together in the space of 7 minutes and 48 seconds.

For instance, Nick says the concept sounds miserable. Nostradamus answers, “I believe it’s pronounced miz-er-ahhh-bluh.” In the space of a few seconds, the cast conflates The Music Man, Seussical and a half-dozen other iconic titles, later falling to their knees to imitate the orphans scrubbing the floor in Annie. Sometimes it’s just a split second: One character throws out his arms referencing Jesus Christ Superstar. Often it’s no more than a single bar of music such as La Cage Aux Folles’ “We are what we are” vamp, or an iconic image like the final moment of the song, which we won’t spoil. Amid hoots and hollers from the crowd, this was one of two numbers that created a sustained ovation from the opening night audience.

But Bottoms’ first attempt at a musical doesn’t quite land: a bouncy number about the Black Plague featuring four dancers dressed as the Grim Reaper.

When Nick learns his wife is expecting a child, he gives the family’s life savings to Nostradamus to predict Shakespeare’s greatest achievement in the future, hoping to co-opt it. The soothsayer hazily suggests something called, what is it, ah yes, “Omelette.” Nick forces his poet brother to collaborate in a full-fledged musical blending the famous plot and a score of famous lines with Broadway production numbers — all impregnated with references to breakfasts with Danish including a dancing ensemble capering inside giant egg costumes.

Meanwhile, Nigel falls in love with Portia, the lovely daughter of an extremely fey but judgmental Puritan who, of course, forbids the poetry-loving couple from meeting. Yes, many of the characters’ names will find their way into Will’s future works including Falstaff and Shylock, a Jewish moneylender who wants invest in the Bottoms’ show.

The delightfully indulgent meta-script by Karey Kirkpatrick and John O’Farrell, plus music and lyrics by Karey and Wayne Kirkpatrick is an unalloyed hoot from beginning to end with much of the humor reliant on anachronisms that satirize how far we’ve come in four centuries – and how little things have changed.

There are a few quibbles, primarily that with words so crucial to the humor, some actors like the opening minstrel do not enunciate clearly.  But any time you can see a large ensemble tap dancing in knee-high boots, you can forgive a lot.

This material might seem foolproof on its face, but it requires a brilliant leader like Nicholaw with a bottom-less well of tricks (sorry about the pun). But it also requires a cast with razor-sharp comic timing and an energy level that door-to-door encyclopedia salesmen would envy. How else can you sell a line like, “How do solve a problem like Ophelia?” Rimshot, please.

Fortunately, Nicholaw and the producers have assembled a superb cast who give each character a different vibe from the original Broadway cast, which starred Brian d’Arcy James and John Cariani as the Bottoms, Christian Borle in a Tony-winning turn as Shakespeare and Brad Oscar as Nostradamus.

Here, we have Rob McClure as Nick, Josh Grisetti as Nigel, Adam Pascal (Rent’s original Roger) as Will, and Blake Hammond as Nostradamus (whom some Floridians may recall won a Carbonell playing Alexander Woolcott in Florida Stage’s musical about the Algonquin roundtable in At Wit’s End.) Also worth praise is Maggie Lakis as Bea and Autumn Hurlbert as Portia.

McClure is not a household name on the road, but he is a renowned mainstay in New York for such work as his Tony-winning turn in Chaplin: The Musical, as one of the few elements critics praised in Honeymoon in Vegas, and as the first replacement in Rotten for d’Arcy James. It’s difficult to explain what he does because he seems such an everyday Everyman, likable even when his character succumbs to his shortcomings. Like an ever-nimble latter-day song-and-dance man, he emanates kinetic energy in his body movements and seems to be leaking radioactive rays out of his eye sockets.

Grisetti, also a replacement as Nigel on Broadway, is a gangly crane-like geek who at first seems risible but who brings out Nigel’s inherent decency. Like McClure, his experience playing the role in New York invests a seamless polish and precision to everything he does, but he’s so skilled that no one notices. He, to0, has visited before: He played the lead in Where’s Charley at the Caldwell Theatre.

With matinee idol good looks, Pascal selflessly lampoons the preening Shakespeare. Dressed in a silver lame garb, Pascal’s Will wallows in the adulation of the crowd in the song “Will Power” which features him slinging out his greatest hits lines musically such as “Shall I compare thee…” to which the crowd finishes “to a summer’s day.” It’s a masterful hoot of acting and writing.

If you read Playbills of road shows carefully, occasionally you often find that the original Broadway elements, especially the direction and choreography, have been copied and even reworked by someone else; some of the original hands have moved on to other projects. While there is an associate director listed here, the founding creative talents (especially Nicholaw) clearly had their hands directly on this production. Also brought along is the original creative team of Jeff Croiter’s lighting, Josh Marquette’s wigs, and above all, Gregg Barnes’ breathtaking satirical parade of motley-colored multi-layered costumes from leather boots to overstuffed codpieces to ruffled collars.

Musical theater is littered with titles that simply beg to be smacked back by critics if the show turns out to be a disaster such as the recent New York show Disaster! (As in the retort, “It certainly was.”) But the producers here have no reason at all to fear that (I can’t resist; it’s that kind of show) anyone in the audience will be prompted to throw something rotten at the stage.

Something Rotten runs through April 2 at the Broward Center for the Performing Arts as part of the Broadway Across America-Fort Lauderdale series, 201 SW Fifth Ave., Fort Lauderdale. Performances are 8 p.m. Tuesday-Saturday; 2 p.m. Wednesday and Saturday; 1 p.m. and 6:30 p.m. Sunday. Running time 2 ½ hours with one intermission. Tickets $35 – $150.  For more information, call 954-462-0222 or visit BrowardCenter.org.