Everything’s Coming Up Roses With Lewis & Dodge In Gypsy 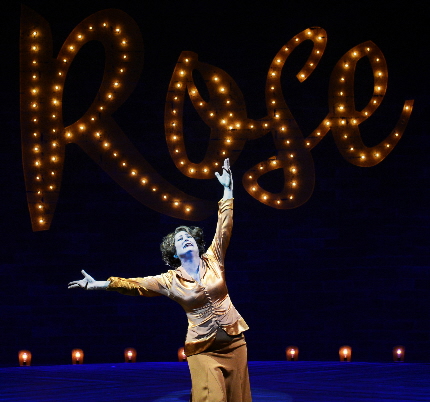 Merman. Lupone. Daly. Lansbury. Taking not a scintilla away from those iconic performances, you have never seen a Mama Rose like the one Vicki Lewis incarnates in Maltz Jupiter Theatre’s unique but masterful take on Gypsy.

Her ultimate stage mother is not the unrelenting pile driver or monster sacré that so many great performers have chosen to depict. While Lewis and director Marcia Milgrom Dodge chose to make Rose brassy, vibrant, funny, overwhelming and undaunted, she also is perhaps the most human Rose you’ve seen. They only unleash her inner driving demons a handful of times. But when they do. That Rose. The word is ferocious. And that ferocity fuels an indomitability that is awe-inspiring to behold.

As they proved when they took on Hello, Dolly! five years ago at the Maltz, Dodge and Lewis make a piece as fresh as if the script and score just arrived in the mail, yet not reinvent it. They simply look for the truth inside the well-worn warhorse and then rip it out of the actors’ spleens. The result is work that echoes no other production you may have seen or recording you may have heard, yet it easily reaches a level far beyond words like satisfying or entertaining.

Gypsy, if you need be told, tracks the theatrical campaign of Rose Horvick and her daughters, very loosely based on the memoir of Gypsy Rose Lee who never balked at admitting that it, as well as most stories she told, were fiction. The 1959 classic is considered one of the finest pieces of musical theater of all time, built on a perfect book by Arthur Laurents, a peerless score by Jule Styne with arguably the best overture in the genre, and brilliant lyrics by Stephen Sondheim who was blocked from writing the score because Merman didn’t trust some newcomer.

The fable is not any kind of love letter to the denizens of the theater world, least of all venerating the threadbare subset of vaudeville dying along with the Great Depression.

Instead, Gypsy is a drolly humorous but clear-eyed examination of how ambition and dreams can be both laudable and destructive as Mama Rose pursues showbiz stardom for her daughters, but really to answer her own frustrated stunted aspirations. Lewis/Rose nearly growls the words, “I was born too soon and I started too late”

The acid tests are Rose’s numbers ending each act, and Lewis and Dodge do not disappoint including a stunning sui generis “Rose’s Turn” absent a shred of any predecessor’s performance.

But just as telling is the first act closer. Rose learns that her daughter, June, whom she has nurtured for stardom to the exclusion of her other daughter, Louise, has eloped with a chorus boy. She has abandoned Rose and her hard-fought dreams, much as Rose’s mother and three husbands did.

Lewis stands stock still with a cruelly twisted mouth and eyes seeing the betrayals of the past. She is stricken, seemingly to the point of paralysis. And then she turns and points her finger at Louise. With terrifying intensity, she proclaims, nay, commands, “I am going to make you a star.” She launches into the classic exhibition of a human being turning into a freight train with “Everything’s Coming Up Roses,” including the introductory lyrics, “They think that we’re through, but….ba-by…” Recollecting her below-the-basement delivery of “ba-by” hours later still brings on chills. The ensuing force of the jetstream in her wake not only sucks along boyfriend Herbie and Louise, but the audience as well.

Rose does terrible things as she ignores the people in her life in her blitzkrieg. Yet Lewis makes it clear that Rose genuinely loves the people around her and that she does think that her relentless drive is for their benefit—even though it clearly is self-fulfillment.

Lewis is physically perfect in that, even as Dolly entering the Harmonia Gardens, she seems cut out of plebian cloth never destined for Greatness. But she emanates an inherent likability and winning charm. Plus Lewis has a voice made for musical theater — not just the lung power for the big numbers, but an actor’s chops to put across the subtler emotions of softer numbers like “Small World” and “You’ll Never Get Away From Me.” Catch how she has her own phrasing, holding and trilling the final notes in some lines.

But the other star of this production is Dodge whose vision and imagination cannot be overstated. Her work from the staging to coalescing visual elements to her own character-driven choreography is among the best you will see in local musical theater.

There are scores and scores of subtle touches worked out with the actors: Rose adjusts the brim of Herbie’s hat as if trying to change him or take ownership of him; Rose slaps the empty rocking chair of her dismissive father as she lectures him in absentia in “Some People;” Dainty June, now grown up but still dressed like an overgrown Shirley Temple, rips off her obviously fake blond wig to reveal a brunette coif in “If Momma Was Married.” When Rose blasts out her vision in “Everything’s Coming Up Roses,” she almost attacks Louise in a hug, making the girl double over as if in pain.

And at the risk of a spoiler, Dodge has Lewis do what we’ve never seen Rose do before: After “Rose’s Turn,” Rose runs to Gypsy’s comforting arms, as the script suggests. But this Rose shatters and crumples into heaving sobs as she collapses completely for the first time. That makes her ensuing resurrection all the more moving. There is even an additional grace note in the final two seconds of the show.

The Maltz invested everything it had, including spending extra cash to expand the superb orchestra under Helen Gregory and, for the first time, installing a turntable,  which adds a cinematic flow to the many scene changes as well as underscoring the theatricality of the vibe.

Much of the creative team are Dodge associates or Maltz regulars who have been working for months to produce a threadbare world a few millimeters under the glitz and glitter: Michael Schweikardt’s suggestive sets including a proscenium made of battered old theatrical trunks, Paul Miller’s scene-defining lighting, Marty Mets’ crystalline sound, and the amusing costumes from Leon Weibers who designed some himself and borrowed others from three other companies.

Musical director Gregory skillfully molds the singers and the orchestra in doing justice to Styne’s score with its colors ranging from brassy razzamatazz (the most energizing opening notes of any musical ever) to poignant ballads. The arrangements embrace the second-rate pit sound for some instruments on occasion such as a tinkly honky-tonk piano.

The supporting cast is just as fine. You don’t realize just how good an actress Emma Stratton is as Louise, even when she sings the plaintive “Little Lamb,” until you watch her grow from the wounded creature uncomfortable in her own skin into the confident, accomplished Gypsy. John Scherer, another Dodge colleague, creates a warm appealing Herbie who credibly sells that his love for Rose enables his constant excuses for her misbehavior. They and Lewis are as convincing interacting in the extended book scenes as they are in the musical numbers.

The cast has 27 people, including eight youngsters, most playing multiple parts. But nods are due Jillian Van Niel as the grown-up June, Brett Thiele as the hoofer-to-be Tulsa, Emily Moreland as Baby Louise, Talia B. Pamatat as the Baby June, and, of course, the hilariously seedy strippers, Katie Thompson as the zaftig Amazonian Mazeppa who bumps it with a trumpet, Jeanne Bennett as the slender light-bulb adorned Electra and Kirsten Wyatt as the raucous irreverent mentor Tessie Tura.

This critic has made no secret in recent months that he could have easily cast first-rate Mama Roses with a half-dozen superlative local actresses such as Elizabeth Dimon, Margot Moreland, Laura Turnbull and Lourelene Snedeker among others. But Dodge and Lewis have an invaluable, irreplaceable and unique connection from having worked together many times before. The result of their collaboration is a performance that should not be missed.

To read our preview feature about the production, click here. 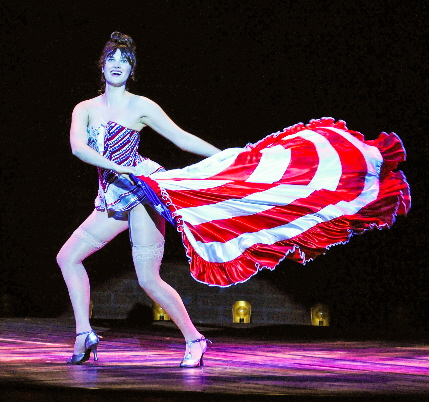