Posted on September 8, 2016 by Bill Hirschman 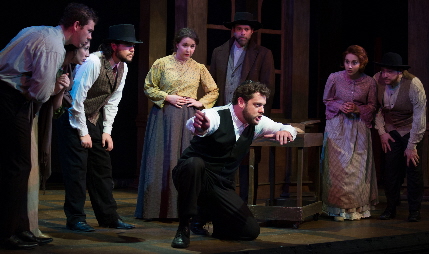 Some who saw the musical The Rothschilds in its 1970 Broadway debut or its 1990 off-Broadway revival still recall being moved by this tale of the Jewish family that rose out of the German ghetto to overcome virulent anti-Semitism and become the legendarily wealthy banking family.

The current production at Broward Stage Door benefits from strong voices, the solid music and lyrics, plus a linchpin performance of Matthew William Chizever as the visionary patriarch Mayer.

But while audiences will be entertained by director Peter J. Loewy’s edition, the clear potential of the material to be stirring and inspiring just isn’t on the Margate stage, although the show does start to catch fire in the final ten minutes.

Even in its previous outings, The Rothschilds never emerged as more than a modest success even though the tuneful score was the last collaboration of Fiddler on the Roof colleagues Jerry Bock and Sheldon Harnick. Sherman Yellen’s libretto was a surprising mixture of classic Broadway musical tropes and dark social commentary about class-based religious bigotry. Other than those who saw it and Broadway nerds, few people know much about it. It’s mostly famous for one affecting song by Hal Linden on the original cast album (and as many actors’ audition number) “In My Own Lifetime.”

It was even taken back into the shop for an overhaul last year by Yellen and Harnick resulting in an acclaimed short run at the York Theatre Company retitled Rothschild & Sons.

The reason for its endurance is that Yellen, Bock and Harnick were on to something when producer Hilly Elkins decided to raid Frederic Morton’s then best-selling biography: a thrilling rags-to-riches story of underdogs that said anyone, especially Jewish audiences, could feel pride in human determination to overcome daunting odds.

The Stage Door team is certainly working hard to plug into that vein, but the show turns into a mildly pleasurable musical evening rather than an ennobling, compelling piece of theater.

The epic traces the family arc from the repressive Frankfurt ghetto in 1772 through its rise as a mercantile-then-banking concern, which leveraged its growing wealth into political power with the goal of ending pervasive prejudice putting Jews in an economic and social straightjacket.

He puts his five sons to work in the business first as children and then as young men (Jonathan Eisele, Alex Salup, Sebastian Lombardo, Alexander Zenoz and Rio Peterson). Over the years, they resentfully ride out frequent anti-Jewish mob attacks on their store and their neighbors, chafing at the inequity of government repression.

But when Napoleon deposes William, the wily Mayer sees an opportunity. He sends the sons to various outposts in Europe to collect the exiled William’s debts and further build their financial empire. Over the years, the family’s canny financial dealings make them wealthy and therefore powerful. But Mayer does not live to see his sons’ eventual victory having governments tear down the ghetto walls and rescind their anti-Jewish policies around 1818.

One of Yellen’s inspired facets is that even as the Rothschilds rise in stature and their goals come closer, he feathers in reminders that all these advances will vanish in less than a century because the unrepentant prejudice has not been eliminated, only reined in as part of a pragmatic financial deal.

On the other hand, this is 1970 musical comedy designed for an audience seeking production numbers. Yellen stops the show to include a classic cute romantic sidebar between Nathan (Zenoz) and the spirited English flower Hannah (Whitney Grace).

The production is held together by Chizever, a dependable longtime leading man at Stage Door who has been absent for a few years doing episodic television and commercials. It’s good to have him back with his charm, gusto and warm baritone, even if some of the score strains his upper register when using his head voice. His performance encompasses Mayer’s scrappy self-confidence, his pragmatism finding an edge to exploit in every opportunity and yet a man dreaming of a better life for his people.

There are some other fine voices, notably Bartmon, Zenoz, Grace and the resonating Stanley (playing four different roles), under the deft musical direction of David Nagy. As usual at Stage Door, David Cohen’s full-voiced orchestrations and digital soundtrack are expertly executed but distractingly sound once or twice-removed. In fact, the strongest element is the score and lyrics by these two old hands which can be alternately bouncy and undeniably heartfelt, melding an 18th Century court vibe with the strains of Jewish folk music – and tunes clearly aiming to be Broadway standards..

But the evening’s weakness is the acting by cast members other than Chizever and Stanley. Much of it is pretty unconvincing until the last ten minutes when the family, promised relief by a prince, struggle with his betrayal (epitomizing that of all society) and plot their revenge.

Others in the cast include Charlotte Canter, Carly Gaynor, Peri Harris (all girls) and Jacob Harris as the young version of the sons, and Courtney Poston, Emily Freeman, Sean Dorazio, Tommy Poduano and Arrow Zurtschmiede as various courtiers and extras.

Michael McClain’s set of sturdy wooden arches was lit by Ardean Landhuis. The costuming headed by Larry Baumann was credible although the white wigs looked like they were made from snow white polyester.

The result is a reasonably diverting afternoon of theater worth a look at a show rarely produced, but its ultimate potential seems just a few steps out of reach.