Stunning Sound From The Stage In FGO’s Orfeo ed Euridice 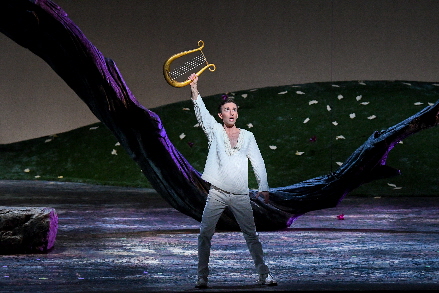 The sound coming from the Arsht Center stage is almost unearthly and totally unexpected unless you’ve seen the opera Orfeo ed Euridice or heard the unique sound of a counter-tenor before.

The voice that ascends to the heavens emanates from a slight of stature man, but if you close your eyes, his high liquid tremelo could just as easily be coming from a female mezzo-soprano.

Initially, it’s a bit of a shock at the Florida Grand Opera this week to hear sustained strong expressive notes in that register coming from a courageous hero. But Anthony Roth Constanzo is so skilled at genuinely occupying this territory – no falsettos here – that the audience is quickly seduced, as the Greek gods are, by his declamations of enduring love for his suddenly deceased wife.

For local audiences, this is a rare treat: FGO has never produced Christoph Willbald Gluck’s early ground-breaking work and they rarely provide a counter-tenor a lead role other than Handel’s Julius Caesar In Egypt.

But casting a singer who can hit notes no Irish tenor would attempt is not a stunt. When Gluck composed the piece, it was scored for a castrato. When such singers became scarce, producers went with “high tenors” and finally began casting female mezzo-sopranos. Indeed, FGO will alternate Costanzo with Lindsay Ammann, both making the FGO debuts.

The handsome lithe Costanzo, who played the role in 2011 with the Palm Beach Opera, slips into the score and the considerable dramatic requirements of the role like donning comfortable clothes. For two 40-minute acts, he sustains Orfeo’s unwavering (and a bit wearing) agony, punctuated with chillingly affecting moments like the lyric “I bring my own hell with me.”

He and conductor Anthony Barrese have designed notes at the end of a phrase in which Constanzo starts softly but perfectly audible, then lets it swell in strength before letting it subside into nothingness. Occasionally, Constanzo lets his voice fall to the bottom of this register, reminding the audience that this not a trick nor a recording, but the result of arduous training.

The opera is drawn from the Greek myth of the supremely gifted musician Orpheus who persuaded the gods to allow him to go into the underworld to retrieve his wife Eurydice. But the deal requires him not to look at her or explain his refusal until he has led her to the surface. En route, Eurydice, who has been lounging in the Edenic Elysian Fields (“Stella!), begs him to look at her or explain his actions, questioning whether he truly loves her. She implores him at great repetitive length in the opera until the agonized Orpheus succumbs, sending her back to Death as the gods warned would occur. Unlike the many variations of the myth in antiquity, librettist Ranieri de Calzabigi and Gluck tack on a happy ending.

Gluck’s vision was an early signal of the genre morphing from the Baroque style of stilted spectacle rather than the new Classic style (later cemented by Mozart) cutting back on the pomp and circumstance and, instead, emphasizing the emotional core of the music. This sense was beautifully and precisely executed by the FGO orchestra which embraced the relative simplicity and purity of the core.

It is carried to another level by the evocative but spare staging of director-choreographer Keturah Stickann working with impressionistic sets and costumes from a previous production by the Seattle Opera that sets the work in a timeless almost modern environment. Especially effective is the lighting by Lucas Kretch. On the same set, he reflects the color and joy of the opening ballet of lovers and large community of chorus members in broad daylight, and then morphs it to the nearly black and white tableau of the solitary Orfeo mourning his wife.

Soprano Jessica E. Jones was supposed to alternate with FGO regular Eglise Gutierrez as Euridice, but “personal reasons” caused Gutierrez to drop out, leaving Jones in her FGO debut to perform the entire run. Lovely of voice and form, Jones is perfectly suited to the role among whose challenges is the heroine’s endless pleading to her husband. The only other principal is soprano Evan Kardon as a steampunk cupid, Amor.

FGO has been battling back from fiscal challenges by alternating titles from opera’s Top 40 charts to works rarely done or even unknown to casual operagoers. How well this working remains to be seen. With snowbird season not over yet, the hall was only about two-thirds full if that on the opening night of Orfeo.

For those MIA, it’s their loss.