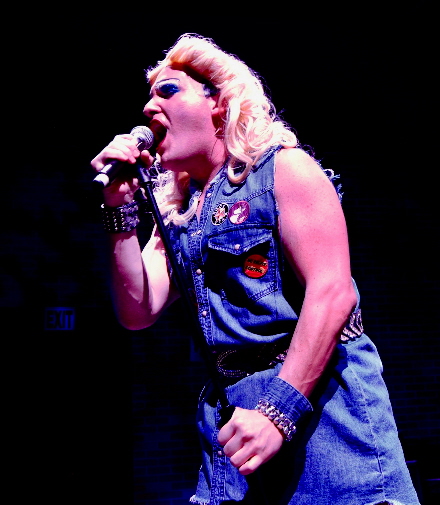 When Mike Westrich bounds onto the stage at the opening of Outre’s life-affirming Hedwig and the Angry Inch—donning the bombshell curls of ‘50s pinup model with midnight-blue mascara, and clad in a cape of superhero silver, a rocker’s denim top, a glittery belt and holey stockings—the critic can already begin to demystify every constituent part. The costume designer’s keen choices, the hour(s?) in front of a makeup mirror just before curtain call, the weeks of memorization and subsequent weeks of rehearsal all helped create the inextinguishable, genderless firework crackling in front of us. We know this.

But it’s more fun—and in the two hours of this transportive production, even somehow plausible—to believe that Mike Westrich always has been Hedwig and always will be Hedwig. Free of camp, and gracious even when she’s delivering bawdy double entendres, this Hedwig disappears into the actor as much as the actor becomes her. Her charisma is his charisma, and so is her despair, and so is her self-actualization. At least in this region, it’s impossible to imagine anyone else in the part.

The production, too, is a high mark in Outre’s history, a worthy contender to such similarly spartan shows as An Iliad and Thrill Me. (Minimalism clearly suits this company.) From costume changes to choreography and blocking, director Skye Whitcomb stages the musical with inconspicuous zest. But it’s his savvy updates to the script—which may vary a bit depending on the audience—and his tonal understanding of the piece that elevate what might have been a micro-targeted cult musical into a stirring, universal appeal for anyone who’s ever felt abandoned, mistreated or unloved. Mind you, it’s really funny getting there—so funny that when the pain finally encroaches on Hedwig’s glossy charm, we want to climb onstage, embrace her, and shake it loose.

Was this always the case in 1998, when the Stephen Trask/John Cameron Mitchell rock musical premiered off-Broadway, en route to its now-legendary two-year run? It’s safe to say a fair number of its curious attendees didn’t know what transgender people were in the late ‘90s, let alone empathize with one of its most flamboyant avatars. This was a stunningly progressive show two decades ago, and we’re better educated today, with more letters being added annually to the gender alphabet soup. It’s only in recent years that Hedwig premiered on Broadway and then embarked on its first national tour. It was once ahead of its time; its time has now come.

Outre’s rendition is special, though, in part because the script has been tailored to the zeitgeist, and to South Florida. The particulars of Mitchell’s provocative and touching narrative remain: Hedwig, born as Hansel on the wrong side of the Berlin Wall, undergoes a mangled sex-change operation to please a sugar daddy, winds up in America and fronts a glam-rock band, while inspiring a close-minded love interest named Tommy who would later disown her.

But before we get to that, Hedwig riffs on Pompano Beach and Mar-a-Lago, takes a few easy but gratifying shots at the president, riffs on Syria a couple of times. Hedwig and the Angry Inch plays like a theatrical memoir, but Westrich approaches it at first like a warm-up comic, acclimating us with the familiar before launching into a story that is anything but. He reels us in from the first note, stealing sips of wine from the VIP tables up front and, later, asking us to compliment his golden locks, and we’d better say something.

His playful puncturing of the fourth wall continues throughout the show, with off-the-cuff quips best appreciated by South Florida theatre geeks. To a reticent opening-weekend audience: “You’re not watching Brigadoon or Memphis; you can talk back.” After he delivers a line that’s already a reference—“Tommy, can you hear me?”—Westrich adds, “I suffered through that show once,” which Outre regulars will appreciate as a wry roast to his own history with the company. This production out-metas what is already a meta-musical.

Westrich isn’t the only talent onstage, though he is certainly the most irrepressible. There’s also Kat Gold, as his husband Yitzhak, a greasy-haired Croat and aspiring drag queen: A woman playing a man who wishes to be a woman. Yitzhak is Hedwig’s henpecked second fiddle, and Gold spends much of the show lurking near the back, grumpily accepting Hedwig’s verbal abuse, until the final moments. It’s a fine performance, especially when she finally yanks the spotlight away from Hedwig, but if there’s a fault to the source material, it’s that she’s mostly a hanger-on to a virtual one-man show—a role that is, for a majority of the script, thankless.

The live band positioned on stage left marks an incalculable improvement from Outre’s American Idiot months ago. It no doubt helps to have Caryl Fantel leading from her perch at the keyboard. A guitarist, bassist and drummer, all dressed like refugees from Haight-Ashbury in 1967, master the score’s rock ‘n’ roll subgenres with aplomb, turning “The Origin of Love” into something the New York Dolls could have written, while “Angry Inch” scalds with the heat of Iggy & the Stooges. “Wig in a Box,” the loveliest song in the show, sounds like a forgotten Elton John hit.

The set, a brick-walled backdrop with a multipurpose alcove and a bar top that’s great for dancing, is simple but achieves the show’s modest design needs. The production’s imperfections are minor. The audio mix that isn’t flawless, leaving an inaudible lyric here and there. The sound cues, deployed whenever Hedwig opens a stage door to, in theory, eavesdrop on his old love Tommy’s fatuous performance in an adjoining venue, could be tighter.

What you’ll remember most is Westrich, effortlessly embodying this complicated icon, dazzling us with her sparkling surfaces before stripping them away to reveal the naked longing underneath. This is who John Cameron Mitchell never knew he was writing for. To borrow the show’s recurring theme, he is the second part of Hedwig that makes her whole. He’s everything she’s been trying to find.