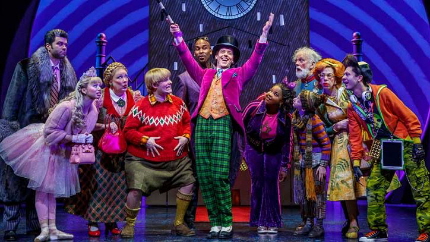 At the beginning of Roald Dahl’s Charlie and the Chocolate Factory, now at the Adrienne Arsht Center only through Sunday, mad chocolatier and businessman Willy Wonka makes a bold statement that chocolate is “quite simply, the greatest invention in the entire history of the world.”

Any chocaholic would agree with that statement — especially those of us who love the dark variety. That same grand statement would not apply to the musical, but Charlie and the Chocolate Factory does reward its audience with a sweetish confection of a production that is fun and entertaining. This national tour embodies the term “family theater” as children — at least the ones near us opening night — and adults enjoyed story and the humor, as did the intelligent 15-year-old who accompanied me.

For those few adults who don’t know, the musical Charlie and the Chocolate Factory is based on the late British writer Roald Dahl’s dark, comic children’s book that was published in 1964. It was adapted to film twice — the classic starring Gene Wilder in 1971 and the 2005 version, about which all I can say is it starred Johnny Depp.

Dahl didn’t write typical children’s books. He took delight in writing mordant, violent books — the kind kids love as do their parents, though the later may be reluctant to admit just how much these appeal to their offspring. Those who want the bright, mushy, moralistic books for kids will find those stories by other authors. Instead, Dahl offered a few nasty characters, both children and adults, not all of whom survived the plots, and heroes and heroines who, with a bit of pluck and magic, were able to rise above this. That certainly happens in Charlie and Matilda, also based on Dahl’s work.

While the Charlie at the Arsht captures the spirit of Dahl, this non-equity production that launches the national tour also is a bit of a sanitized version. Instead of being violently eccentric, this Wonka (winningly played by Cody Garcia, channeling Wilder’s hair) is more eccentric, more distracted and unconcerned by the havoc his factory causes and the subsequent demises of the children touring this factory. And when some of those kids die — please, this is not a spoiler, the book is 56 years old — the comic aspect with no blood is played up. This works well for young audience members, as well as the fact that, aside from Charlie, the other children are played by adults, making the deaths more palatable for the child theatergoers.

Little Charlie Bucket (a strong Ryan Umbarila on opening night, alternating with Brody Brett) lives in a ramshackle house that a weak wind would destroy, with his hard-working mother (Caitlin Lester-Sams) and his four grandparents, Grandpas Joe and George and Grandmas Josephine and Georgina. Mrs. Bucket is out scrounging a living as a laundress and finding items at the dump while the grandparents are bedridden, apparently so for decades. Charlie buys moldy or near rotten food from the local vendor Mrs. Green (a comic turn by Domanick Hubbard) that his mother somehow manages to make into a meager soup that all share using just one bowl.

Charlie is obsessed with chocolate, especially Wonka confections, fueled by Grandpa Joe’s stories about his days as a security guard at the factory. Charlie gets one bar a year on his birthday. The rest of the year, Charlie dreams of chocolate and plays a Wonka-themed game that he and Grandpa Joe invented. Although Wonka chocolate is now out of fashion (“Only old people buy it,” states Charlie), it remains his favorite. Charlie is especially excited when a Wonka store opens in his neighborhood.

The new sweet shop is nirvana to Charlie who visits almost daily, unable to afford to buy anything. He can only sniff the discarded wrappings and dreams of biting in the one bar he frequently picks up, although he’s admonished not to by the store’s proprietor, Wonka in disguise.

Charlie’s conversations give the reclusive Wonka the idea of holding a worldwide lottery in which five children, accompanied by a guardian, may tour his top-secret factory and could win a lifetime supply of Wonka candy. The winning Golden Tickets will be inside a Wonka bar distributed across the globe, thus making the brand more popular. But Charlie can’t afford to buy any bar, which he bemoans daily to Wonka. Just when you think Wonka may give him a winning bar, his hopes are dashed, and plummet again when other winners are announced. But by some miracle, Charlie finds the money to buy a bar from Mrs. Green that just happens to have the final Golden Ticket.

Along with Grandpa Joe, who is now miraculously robust, Charlie meets his competition—the rather large Augustus Gloop (Sam St. Jean) who loves sausage, too much; the spoiled Russian ballerina Veruca Salt (Angela Palladini) who doesn’t know the meaning of the word “no;” the arrogant, disrespectful Mike Teavee (Matthew Boyd Snyder) and social media star Violet Beauregarde (a scene-stealing Zakiya Baptiste) who is the “queen of pop,” famous for being famous and constantly chewing gum. Except for Charlie, these are a pampered group whose pride and conceit will be their downfall.

The first act gets a rousing start with Garcia’s rendition of “The Candy Man,” the musical’s most famous song and a hit for the late Sammy Davis Jr. (kids, Google him). Act One isn’t exactly a sugar rush, but it’s a toothsome start with other standouts “If Your Father Was Here,” sung by the full-throated Lester-Sams and the hip-hop “Queen of Pop” by Baptiste, Branden R. Mangan and her Gum Chompin’ Divas.

Ah, but it’s the second act when Dahl’s true colors come through. The kids are warned to stay away from the deadly chocolate rivers, an untested confection that might result in an expanding blueberry, a TV set and dancing squirrels.

But do Violet, Mike, Augustus or Veruca listen? Of course not.

For this national tour, the set is pared down primarily to interesting computer-generated projections. This is especially effective at the top of Act Two when Wonka unveils his astounding Garden of Imagination with the musical’s second most popular song “Pure Imagination.” The Oompa Loopas’ entrance in the second act truly is pure imagination as these little assembly-line workers belt out three songs with a mix of puppetry and choreography.

Roald Dahl’s Charlie and the Chocolate Factory had a respectable run on London’s West End in 2013, with director Sam Mendes at the helm, then moving to Broadway in 2017. New songs were added to the original Leslie Bricusse-Anthony Newley soundtrack by “Hairspray” composer-lyricist Marc Shaiman and co-lyricist Scott Wittman; both were also Oscar nominees for “Mary Poppins Returns.” For the New York run, “Hairspray” alum Jack O’Brien, replaced Mendes.

This tour of Roald Dahl’s Charlie and the Chocolate Factory may not reach the Golden Ticket status but rather a respectable silver and it’s a sweet way to begin 2020.

This entry was posted in Performances, Reviews and tagged Roald Dahl's Charlie and the Chocolate Factory. Bookmark the permalink.